I believe that the industry is stagnant and needs to change with these times. This idea of a record label seems outdated in this time of a rapidly expanding technological landscape. With social media and the internet, artists have this direct access to fans that were previously unavailable. –

GETTING TO KNOW PYRO
by Jacqueline Jax host of A.V.A Live Radio

I believe that the industry is stagnant,
and needs to change with these times. This idea of a record label seems outdated in this time of a rapidly expanding technological landscape. With social media and the internet, artists have this direct access to fans that were previously unavailable. Because of this, I believe that the need for a record label will wane over time as artists pursue other options. What these options may be, I’m not exactly sure quite yet, but I hope that the medium between the artist and the consumer will evolve into something that changes the idea that a musician is working for a label, or that an artist feels as if they owe something to the organization that signed them.
.
With any artist that is just starting out,
getting exposure and market penetration can be a difficult task. Unfortunately, my band will not be able to tour just yet due to logistical issues, but I know in the near future this will not be a problem. We’ve made this demo, but we need to play our damn music so more people can hear it. Being on a radio such as this one certainly helps, and I feel honored to have been asked for an interview. Another hurdle that all musicians face, that we are currently trying to work out now, is our sound. As I said before, recording this album was an experiment to see where we would like to go with our craft. We discussed this at length, and I think this whole process has allowed us to figure ourselves out creatively, and where we fit on the diverse musical plane.

I’m totally for releasing albums.
I think it challenges artists to make a whole bunch of music that isn’t crap, and the very nature of an album demands consistency in quality. I believe that this format allows for more creative experimentation, and pushes artists to strive to make better material. Churning out singles just seems to be the easy way out.

Social media has allowed me to gain enough exposure
to play concerts in front of fans that I didn’t even think I had. When I was younger, putting out some average, acoustic renditions of original material was enough to get some people to pay attention, and this allowed me to experience the strange but beautiful world of touring, which I have enjoyed very very much.

That’s a hard choice, but that would be a tossup
between my guitar idol of Jonny Greenwood of Radiohead and Kevin Parker of Tame Impala. I’d probably pick Greenwood, but I’d like to include Parker as an honorable mention. From the first time I heard OK Computer, I realized that Greenwood was exploring into a whole new plane of guitar playing that I had never heard before. The raw heaviness yet unmistakable beauty of his lead guitar playing changed the whole way I thought about playing the instrument. On top of that, his orchestral arrangements of his later work layered with the rest of his instrumentation are nothing short of fantastic. One day I hope to meet with him and pick apart his weird, but very gifted musical mind.

I feel that there’s this idea that music has to be a certain way now,
and you can hear it everywhere – it’s all about partying, how much money someone has, or how many girls they can score. On top of that, the quality of music produced seems to be secondary to the image of the performer. There’s either these misogynistic, overcompensating men talking about their accomplishments at the club, or gorgeous female stars that are victims of a society and media that tell women they have to look and act a certain way. I think that music is a snapshot of a culture at a particular time, but can also influence and usher in new cultures and ideas. From these two male and female counterparts, we produce a fanbase that consumes this glorification of an unrealistic image of party-life, and accepts it’s meaning and implications. I feel that many musicians are jumping on board this music train with it’s catchy hooks and flashy music videos in an effort to stay relevant, but are losing meaning in their music, and lowering themselves by promoting bad behavior. Sometimes when I hear a song that promotes violence or speaks about women in a profane way, I wonder how many other millions of young people listen to this music and idolize its performer. If this is what people call trendy, then I hope to never be a part of it.

Quote from Plato:
Music is a moral law. It gives soul to the universe, wings to the mind, flight to the imagination, and charm and gaiety to life and to everything.

I didn’t really get into music until
I had to take care of a close friend of mine that was recovering after a life threatening injury. He taught me how to play bass, and from there I learned how to play guitar, drums, saxophone, piano, and how to sing. Playing music with him started out as a way of rehabilitation or recuperation, but eventually became more of a serious thing when we started playing gigs, writing songs, and recording original material in a studio. We formed a band in my hometown of Sydney, Australia, and the rest is history.

The Arrival is a commentary on the prevalent drug culture of many musicians.
This song neither glorifies nor condemns substance abuse, but reflects on its implications. As the vocalist, I sing from the point of view of a strung out musician who wrestles with his addiction. The idea of addiction however is personified in the song – the musician is attempting to reason with an individual who is the metaphorical embodiment of this darker side. The use of the word “her” refers directly to his addiction, as he attempts to fight something that he believes is both beautiful, but also very dangerous.

I originally aimed to have the song be a slower,
softer tune, but a spur of the moment decision prompted me to program string samples, employ the use of a trombone player, and feature the heavy use of a bowed guitar. I realized that an angrier, more desperate sounding feel was more fitting of the subject matter of the song. I wanted the chorus to sound huge, and giving it an orchestral, almost James Bond theme feel seemed like the better option.

This album is compilation of many songs written over a long period of time,
in very different settings and circumstances, created in very different states of mind. To some, this album may appear very eclectic, and this was exactly my intention. I wanted to test out the waters, and make a very different songs just to figure out what sounded good, what I liked, and what other people thought of the music. I hoped to create a diverse album to really see if making music was something I wanted to pursue. The goal of this album was to diversify my music, and from there I could hone in on a particular sound or aspect that I liked from the album. From the listener’s perspective, I wanted to create songs that had meaning, but would really stick out to some people, lyrically, or instrumentally. This album was titled The Fourth Wall because at some points in these songs I am speaking directly to the consumer, and bringing to light various ideas, issues, and controversies. As the vocalist, I am trying to break this barrier with the audience, acknowledging their existence, and asking them questions about society and life in general. Though some people found the subject matter of some material distasteful, I thought it was important to bring some issues to the table. In one such song called Candy Store, I attempt to highlight both passive and aggressive sexism through the eyes of a misogynistic male talking to a young woman who is far more intelligent than he is. In the chorus, she acknowledges the situation, and makes a witty comeback in her defense. I also felt that lyrics like these were different and shakeup in the mix of many songs these days that cover the same material. 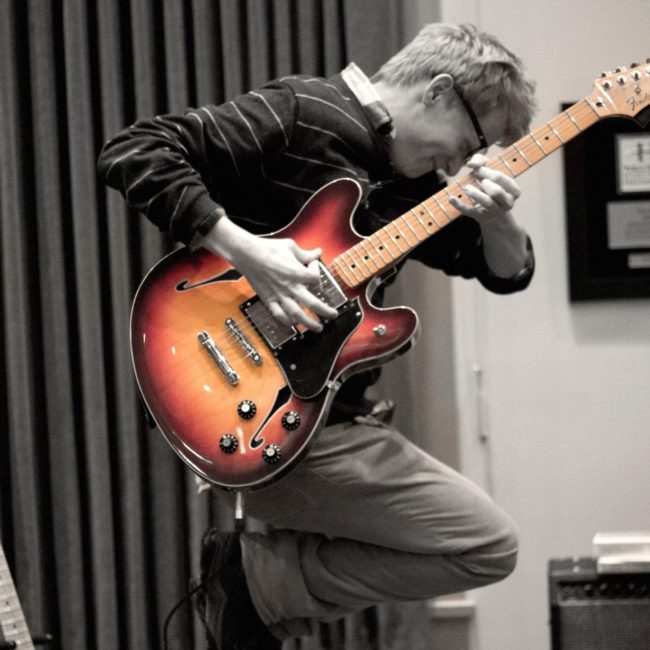 I grew up in Sydney, Australia…
and that city has an amazing music scene. Not only are there a lot of bands and venues to play at, but the people there really try and support up and coming musicians. When I started playing gigs, we were absolute crap, but people still came to our shows and gave us advice, and nurtured our growth as songwriters and performers. This one wacky area of Sydney called Newtown always had some weird band playing or some show going on. I remember just playing on the street there with a friend of mine and people started to gather and dance for the hell of it – people didn’t care that it was 2:00 in the morning. If there’s some music playing, people in Sydney were willing to listen to it, and for any musicians starting out, that kind of of community support gave a lot of young people the confidence and drive to write songs and play gigs.

One of my favorite things in the world is playing at concerts.
The vibe and the energy – it’s electrifying. Performing music to an eager audience is fun and freaky, and it’s hard to compare that kind of sensation to much else.