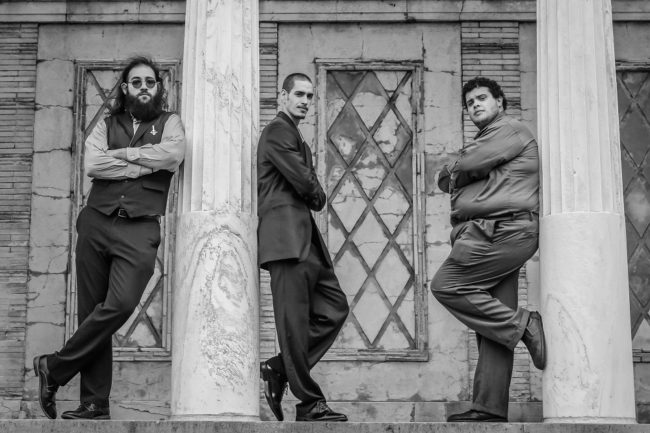 Their journey brings together people who want to escape the clutches of reality. To return to a place where you are never judged and only understood. Their commitment to their fans is one they treasure deeply, for Homerik is not just a band but a message for others to live life as full as they possibly can. To be “Homeric” is to be epic; the way life should be.

Interview by Jacqueline Jax
host of A.V.A Live Radio
Band Name: Homerik
Person Interviewing: Ken Candelas
At the helm is our core trio: The Mad Composer (Kenneth Candelas), The Daemon (Andrew Petriske), and The Gatherer (Obed Gonzalez).
However, what lies within each song of Homerik’s latest record is more than just the work of a dedicated trio.
Homerik’s debut album is better described as a major collaborative effort by friends and colleagues in and around New York City – a feat that took the better part of three years to complete. In an attempt to record every instrument that they could find a musician to play from their compositions, Homerik established their own LLC and funded everything themselves, taking full ownership over their musical direction in this new music industry.

As Puerto Ricans from The Bronx and Queens, Homerik’s foundation came from a brotherhood whose bond grew out of the love and respect that our three members have for each other, a factor that they cherish from their culture.

Andrew and Obed were sworn brothers for a decade before they ever met Ken. It was soon after Ken and Andrew met each other at a job in a local movie theater that Ken was finally introduced to Obed over a game of Gears of War on Xbox Live. Their personalities gelled, and each one had a strength and weakness to help each other overcome.
Recorded at the Sonic Arts Center at The City College of New York, and in various studios via internships throughout New York, Homerik was determined to create an album that would have immense replay value. Something that would draw you deeper the more you listened to it. The Mad Composer says, “As a child, I grew up surrounded by movie collections and video games stacked from the floor to the ceiling. I loved the way a film score would tell a story, and how a video game’s soundtrack would make you feel in the moment. There was a certain magic that was only captured in these types of styles.”

Their journey brings together people who want to escape the clutches of reality. To return to a place where you are never judged and only understood. Their commitment to their fans is one they treasure deeply, for Homerik is not just a band but a message for others to live life as full as they possibly can. To be “Homeric” is to be epic; the way life should be.

“Curse of the Black Nile” is a testament to Homerik’s commitment to literature. A direct translation of the “Cannibal Hymn” from the tomb of Unas (ca.2378 – 2348 BCE) the ninth and last ruler of the Fifth Dynasty of the Old Kingdom in Ancient Egypt, “Curse of the Black Nile” relates this piece of archaic text to feelings of isolation and solitude. When limitations weigh heavily on one’s shoulders, or when outsiders invade one’s private space, one just wants to fly away and separate from the stress of the world. With feelings of soaring, “Curse” allows the listener to feel the sensation of flight over the vast sands that blow against the towering pyramids of a kingdom lost in time and the darkness that one would expect to feel under the blight of a pharaoh’s curse.

“It took three months to figure it out,” says Ken. “I reached out to every Coptic church I could find across the United States, and nobody wanted to help. They were all too scared of the consequences of the old tomb’s curse. So, I looked inside the world of academia and discovered a historian by the name of Vincent Brown: an Egyptologist who prepared the phonetics of the Hieroglyphic text into Ancient Egyptian. The translation allowed us to use it in song through our own artistic means. It’s a tricky subject to do right, since any translation of Hieroglyphs into words of the ancient language are, at best, 60% accurate. But we wanted it to be as authentic as possible. Now, hearing the language of times long forgotten in a modern world come to life is extremely humbling. We are happy to carry its torch and bring it to light.”

Link to play:: https://www.youtube.com/watch?v=5yB1OMxGXqw
When I was a teenager, I was involved in a fan project called Zelda Reorchestrated that reorchestrated all of the tunes in the Nintendo game series, The Legend of Zelda (composed by Koji Kondo). I got so much practice with orchestral samples, audio software, and transcribing that my taste for composing orchestras grew fervently. It came to a point that I heard everything with the sound of strings and/or brass, including guitar arrangements!

The most influential person to me was my father. A phenomenal drummer who’s credits are too long to list in this interview, my father encouraged me to pursue my passion ever since I started playing drums after I tried the game Rock Band. He never wanted to tell me what to do, he just wanted to show me the possibilities and help me find the path that was fit for me. I’ll never forget the support my family gave me.

I’m blessed to have been born to a family of artists who understands the needs of a creative. It was through him that I learned how to listen and incorporate musical styles into my playing and writing. Some other composers and artists that inspire me are Slayer, King Diamond, Hans Zimmer, Danny Elfman, Loreena McKennitt, Enya, Mozart, Nightwish, Epica, and many more.

When I start a composition, it usually comes from a tune or riff idea that I’ve recorded on my phone. While on my way to work, I usually get inspired and come up with a cool idea that I jot down immediately, lest it be lost to the elusive universe forever. I incorporate a lot of Japanese taikos and big percussion. It creates a very bombastic sound that is unique to many film scores, giving it a sense of tribalism. As a Latino, I resonate with percussion heavily. It’s in my blood.

My main composing software is Logic Pro, but I prefer to record and mix in Pro Tools. I’m fluid in both, and it keeps my chops up in both of them so that makes me pretty happy. Working as an audio technician and engineer means that I have a variety of jobs to handle, and some of them require skills that others don’t. It’s like keeping up to date with oil changes for your car.

Even though I spend most of my time composing orchestras and playing like Animal on the drums, nothing quite does it for me like a cathedral pipe organ. When we recorded “An Angel of Darkness”, I have to say… hearing my arrangement come to life on this giant 12,000 pipe organ inside the Riverside Church of NYC was absolutely glorious. It’s like a high that stays with you forever!

I live in an apartment in Queens, NY. My time mostly goes towards working on Homerik’s next big project and working as a freelance sound man. I love Netflix and my Xbox One. Great sources of entertainment! Connect with us on Xbox Live: TH3madC0MP0SER, TH3DAEMON, TH3GATHERER.

“The ultimate goal for me in making music, or at least one of the main goals for me, is to create memorable melodies.  That goal is there regardless of the tools we have.” – Koji Kondo

This past month was packed with productive rehearsals. Every Friday, we get together and work on our material. The focus on this quarter was to complete the composition of our second album. Inspired by Dante’s Inferno, we have elaborated on the story of “A Song of the Night: Part I” and will begin recording the album later this year.

We’ve recently added a new core member, Cory Boyle “The Nightwalker”, to the group who we will debut very soon with an upcoming photo shoot. An insomniac, his compositions and ideas have elevated the music of Homerik to a sound that can only be described as Symphonic Black Metal. These compositions have already been in the works for two years. You can bet that this is way more ambitious than our first album, and will take listeners for a ride that entirely puts them in the world of “l’Inferno.”

This past year we have learned:

1) Don’t sacrifice your time and energy for someone else’s dream. Follow your own path. That is the way to wealth and freedom.

2) Keep three things to yourself: your bank account, your love life, and your next move. Instead of talking, just do. The rest will follow.

3) Believe in the power of a team. No one can be successful on their own. Test your inner circle and learn to grow. You need trust!