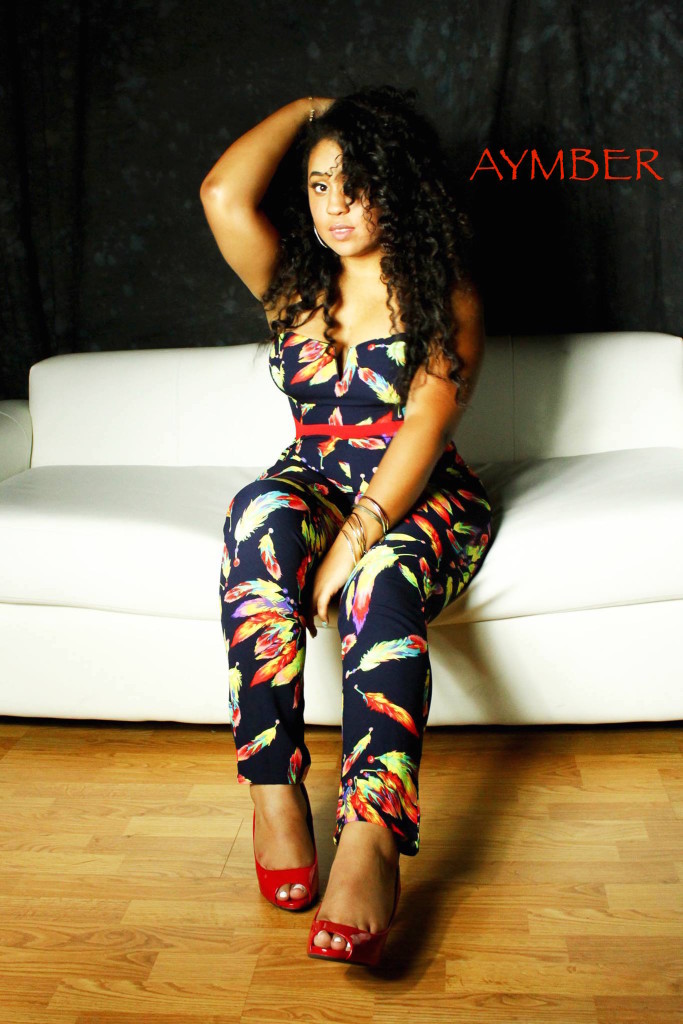 Aymber is a 23 year old Singer/Songwriter from South Florida. She has been writing her own music since she taught herself how to play guitar. She has traveled to multiple cities throughout the country performing her music. Aymber plans on releasing her first EP in 2015.

My start in music..
Well, I’ve been singing since I was little, not in front of people or anything, just around the house, with my friends and stuff like that, everyone always told me that I COULD sing, but I had never thought of doing it as a career. So I just did the “normal” thing and graduated high school, went to college, and got my first big girl job, and within a month I got laid off. When I went to the check cashing store to cash my last check there was a guitar hanging in the window of the Pawn Shop next door. I don’t know what possessed me to spend my last dime on an instrument that I knew nothing about, but I bought it, brought it home, taught myself how to play, and wrote my first song that night, and I’ve been doing it ever since.

My Song “EASY”….
“Easy” was inspired by my last relationship, it was honestly the best and worst thing that has ever happened to me. Let’s just say that he wasn’t the best boyfriend in the world and after the last fight we had it’s like something in my head just clicked. I doubted myself so much during the entire relationship and toward the end I just kept telling myself- “You deserve so much better, you made it so easy for him to love you, and he still isn’t putting in any effort”. So I picked up my guitar and started writing, and I got all of my anger out through that song. So “Easy” is like a big screw you to him (haha), it’s everything that I should have said when he was standing in front of me, but I was too angry and hurt to think of at the time. The moral of the story is NEVER break a singer’s heart, because they WILL write a song about it.

“During some of the harder times in my life, I used to go to the beach by myself a lot, just to think. What that did for me was, it reminded me just how small I was. Sometimes, it made me feel like my problems weren’t so big and that there has to be someone out there who has it worse than me. Sometimes, it made me feel like I didn’t matter at all, like I was irrelevant. When I would finally go home or be with my friends, something became very clear to me. I don’t need to be the next Beyonce, my name doesn’t have to be in lights, and the rest of the world doesn’t need to know who I am, because these people love me and I’m such a huge part of their world, and they’re such a huge part of mine, and that’s where I fit in. “- Aymber

The music scene in South Florida….
It’s more like a family, everyone kind of looks out for one another and we motivate everyone to do better, either that or I’ve just gotten extremely lucky with the people that I’ve met so far. One thing I have found is that the Open Mics are disappearing, which sucks because that’s how I got started, and how I got a lot of the shows that I’ve done, but there’s still places to sing. One of my favorite places to go is the Hard Rock down in Hollywood, FL. I’ve played there a few times, on the Paradise Center Stage and inside at the Hard Rock Cafe, the crowd is always very responsive, it’s a blast. When I’m not playing I still go just to hang out with my friends or to see the local bands, because they’re usually pretty awesome, and more times than not I know them, I love showing support to anyone trying to live out their dreams.

My definition of success is….
To me, success is accomplishing personal goals. Whether that’s losing 5 pounds, or running 2 miles non-stop or teaching yourself how to play piano. If you make a goal, big or small, work for it and accomplish it, you’ve won, you’ve succeeded. It’s not always about money or how nice your car is or how many people know your name. For me, success is doing what you set out to do.