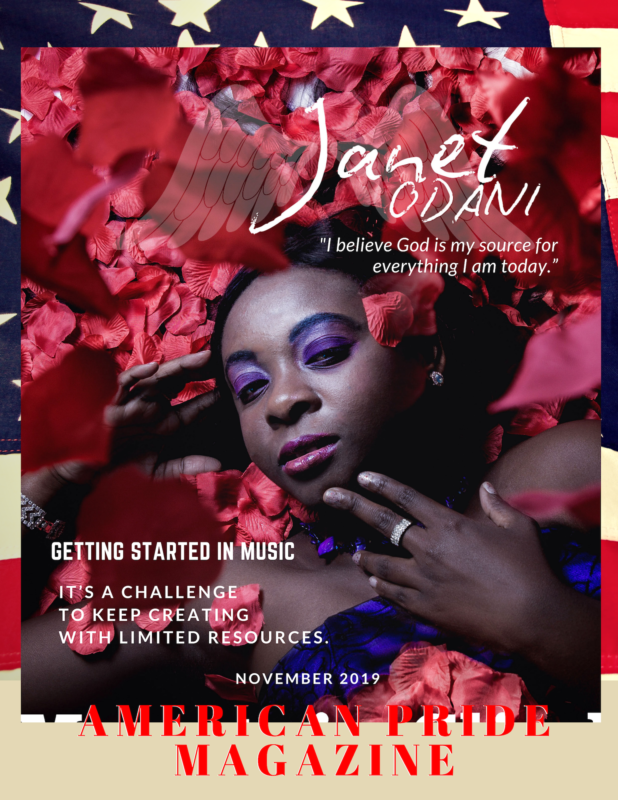 Janet Odani is a singer and songwriter currently based in Coffs Harbour, Australia.

A keen music lover from the very beginning, she wrote her first song as a young girl at the tender age of six. She was also an enthusiastic part of musicals at schools, as well as choirs. Passion stemming from such an early age cannot be curtailed, and so as the years have gone by, she has worked on developing her own unique style of music.

She released her debut album, Transparency, in 2013. This was a rich blend of both inspirational songs and love songs that were well received for its soulfulness. Critics noted how Janet’s music came straight from the heart and with purpose. Filled with spiritual lyrics, Transparency was an introspective album that allowed the sweetness and innocence of Janet’s voice to shine through.

She collaborated with UK HipHop Artist of the year (2015) Bluehomie, and wrote and performed chorus vocals for his rap song ‘Just’ and also performed vocals for Everyoneband’s song ‘Stand by You’.

October 2016 saw the release of her single Significant Mistake, after which she was featured in American Pride Magazine. Then in 2017, she released her second album, Mismatched Planets, which was noted for being the work of a talented songwriter. The album had a strong selection of songs, and Janet received much praise for her writing skills.

Right on the heels of this second album, Janet released her third album Valiant Warrior in 2018. Valiant Warrior is an inspirational album, highlighting the challenges on her journey as a believer in Jesus Christ with a focus on the promises of God for companionship, salvation, victory, and love.

Listen to the Show:
Janet Odani speaks with Jacqueline Jax on breeding determination and finding balance as an artist. How to listen to your inner voice and develop your skills on your journey to become a better artist.

I live in… Coffs Harbour, Australia

Who has been the most influential in your music and why…

I have to say without a doubt, that would be the Saviour of my soul, Jesus Christ

When did you know that this was the right path for you?
I distinctly remember writing my first song when I was only 6 years old and I didn’t know at the time just how much music is a part of me. Looking back I always found myself involved in something to do with music from being in choirs at church or performing in talent shows at school. I have always enjoyed being involved in activities related to music. I think the right path found my way before I even realized!!

What do you like most about what you do?
The fact that I can encourage others through my music.

What do you most hope to accomplish with your influence?
I hope to inspire others to identify their gift, be passionate about it, take the time to develop their craft and share it with others.

What is the biggest obstacle you have faced in your career, and how did you overcome it?
It’s a challenge to keep creating with limited resources. I found it wise and even necessary to learn more than just the music side of things. I learned how to create simple music videos that could represent my music. I think apart from an artist being a creator, at some level, an artist has to be a manager of their craft.

What do you want people to remember most about you and your career?
I know exactly what it’s like to be aware that you have a gift and yet struggle with lack of confidence, lack of knowledge about how to develop your gift and have no outlet to share it. There’s a high price to pay when an artist decides to shy away… holding back limits the artist and everyone else in the artist’s sphere of influence who the artist can inspire. I choose to be the one that encourages someone to push through the obstacles and be passionate about their craft and shine through their gift. I choose to be the one to say to the artist still finding their feet or hiding away in broad daylight … live the dream!

Janet has recently released her 4th music Album ‘Mountain Climber’ which has an upbeat feel with inspirational lyrics.

Rising is yet another inspirational song I wrote out of a very desperate situation. I would like to encourage listeners that in such times we are eligible for help from above … all we need to do is ask.