GETTING TO KNOW NICK VANDELL
By Jacqueline Jax

Getting started…
I started out as a cellist in the Junior High School Orchestra and eventually was presented with an award by the Chancy Memorial Foundation in recognition for an abiding love for and interest in music. Influenced by a diverse repertoire of music to listen to back in the day, I also developed a love for singing over the years and found a passion for songwriting. I learned to produce and record music by my brother-in-law Peter who used to write and play music with me. I used to do all the singing on his songs before he moved to Connecticut. Although we are no longer writing and recording together since he moved away, the thought of no longer creating music inspired me to not only build the home recording studio I use today, but since 2009, I have written and recorded 4 albums and currently working on a fifth. While I work alone in the studio, my daughter Melissa plays clarinet and my son Nicholas plays saxophone, both from the school band. They have recorded with their instruments on several of my tracks. Additionally, my daughter directed 4 of my music videos including our latest, “An Eagle Soaring” which was released on youtube, July of 2014. 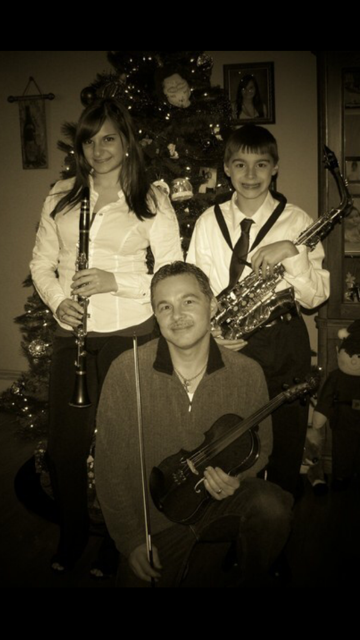 The music scene in Jefferson N.J…
Its a small town. During mid July, there is a festive day called, Jefferson Day. A lot of the towns musicians, orchestras, chorus' and bands take to the stage on the high school grounds and entertain the community before finally conceding to the fireworks display. It is one of my hopes that one day, “An Eagle Soaring” will be playing in the background along with the many great anthems that correlate with the fireworks show.

For Fun..
I enjoy coaching my son's basketball teams each season. Yeah, he not only plays a heck of a saxophone in the school band and on many Vandell songs, he's a heck of a basketball player. My daughter directed and entered funny commercials into the Doritos Crash the Superbowl competition. Although our four entries didn't win, they certainly were entertaining and received favorable feedback. That was a blast and I hope we can do that again one day. The whole family was involved.

Social Media…
While I'm still learning the limitless resources, I think there are lots of opportunities, especially for indie artists.

Challenges…
Writing musical melodies comes very very natural to me and basically instantaneously. But writing meaningful lyrics, stories, that is a great challenge. As a result, I took some courses with Coursera on songwriting and it helped me break down the lyric writing process.

Favorite artists…
Beatles, John Lennon, Paul McCartney, Elton John, Billy Joel, U-2, Phil Collins, Tom Petty, Barry Manilow, John Denver, Simon and Garfunkel… I'm sure I missed a ton but this is my foundation for now. The songs are very singable, unforgettable. In other words, on any given day, I can turn on my brain-radio to any of the above artists' songs and keep it in my head the whole day. The lyrics of these artists are top notch as well. I truly idolize these artists. My brother and I went to beatlefest and noticed Mr. Pete Best at an autograph table. Of course, we went over to meet him and got his autograph. I shook hands with a Beatle. Not many can say that. Heck, while he was dismissed from the Beatles before they became the greatest band of all time, I still wish I was in his shoes. I was also fortunate enough to see Paul in concert and Ringo in concert.

My personal definition of success..
Happiness. Without it, whats the point?

Promote your mixtape at ReverbNation.com

“An Eagle Soaring”…
Well, I always wanted to write a patriotic song for our country. It's about Freedom. Unfortunately, our house cat, Mulligan, used to stay in the studio most of the time. He eventually became very ill, so ill, that he eventually couldn't clean himself properly and wound up destroying major parts of my keyboard. So I had to take the keyboard in for repair. While of course I was not happy that I was without a keyboard for a few months, worst of all, we lost Mulligan.
Leading up to July 4th, I wanted to write a patriotic song, but my keyboard was out for repair. So, while I am not a guitarist, I decided to write “An Eagle Soaring” with the guitar. At the time, it was only the second time I used the guitar as the primary instrument in creating a song. The first one was on my first album, “Emotions of Glass”. Before I got my keyboard back, I would write yet another one, “My Normandy”, a song about my family tree. After I got my keyboard back, I wound up writing a song in memory of my furry friend entitled, “Mulligan's Song”, from my fourth album.

Listen to the interview:
http://www.blogtalkradio.com/avaliveradio/2015/03/19/episode-227-ava-live-radio-behind-the-music-with-jacqueline-jax

BIO
Nick Dellacato (A.K.A. Nick Vandell), a singer/songwriter with a unique sound, was first touched by the art of music playing the cello in the school orchestra. Nick was known to have a gifted ear for music and was presented with an award from the Chancy Memorial Foundation in recognition of Nick's abiding love for and interest in music. He eventually learned to sing, picked up several instruments and discovered the art of songwriting. To date, has written and recorded 4 albums which can be found in several major eStores including iTunes, Spotify, eMusic, GooglePlay and Deezer to name a few. Nicks daughter Melissa directed his Music Video “An Eagle Soaring” a single from his third album “My Angel's Calling”. Daughter Melissa plays clarinet and son Nicholas plays saxophone on several of Nicks recordings as well..sort of a modern day mini Partridge Family. Nick is currently working on his fifth album “It All Passes”

All of Nicks latest music and videos can be found on www.reverbnation.com/nickvandell