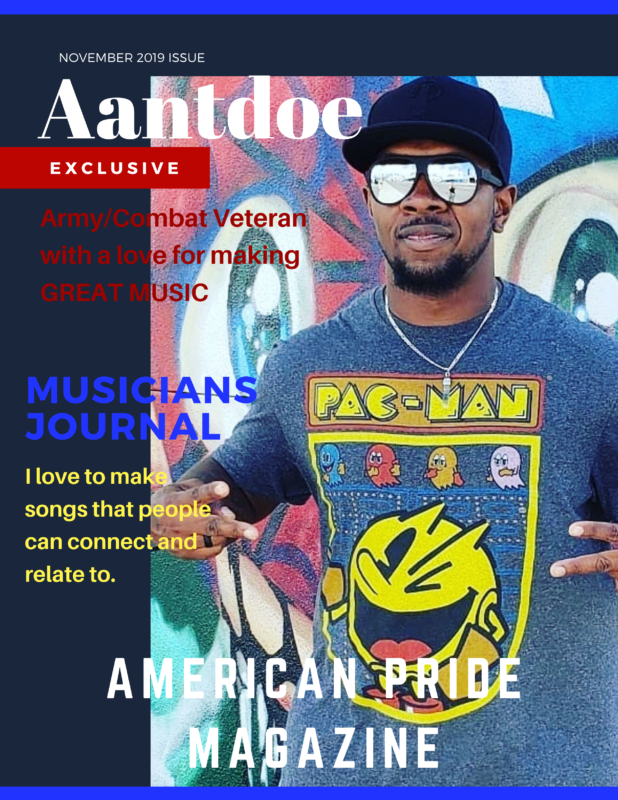 Aantdoe is an Army/Combat Veteran with a love for making GREAT MUSIC!!! I’m a Rapper from Philadelphia PA who loves making Hip Hop music but more of an adult version… There is so much more to rap then what gets played on the radio… There are still Emcees out here that take time and focus on the lyrical aspect of Rap… I rap about real-life situations that all ages can relate to… Although my target audience is a more mature crowd… So I like to call it GFR or GROWN FOLKS RAP… My songs Right Back, That Ain’t You and Strange Things HBH is available on ALL STREAMING PLATFORMS!!!! Follow me on ALL Social Media @aantdoemusic!!!

I’m from Philadelphia P.a. Born and raised in West Philly (Da Bottom to be specific)… I retired from the military and am now living in Phenix City AL… I spend most of my time writing songs and with my family… FAMILY is EVERYTHING!!!! Music is MEDICINE!!!!

Listen to the interview:

Who has been the most influential in your music?

I’m totally influenced by my FAMILY. They are the number one reason I do what I do.

I’m also an Old School Hip Hop fanatic so 90% of my Rap influence comes from the Emcees from the ’80s and ’90s… I just feel like the purest rap came from that era. You had to be different if you wanted to be seen and you had to be saying something when you were on that mic. It was 80% about the lyrics and 20% about the track. Today’s rap is totally opposite. There are less than a handful of rappers who still actually focus on lyricism. Nowadays it’s more focused on WHO produced the track over what’s being said and I’m motivated to bring the focus back to what’s being said.

I’ve always loved to make up songs. I made up songs for elementary school talent shows. I started as a DJ back in high school and from there I focused on getting serious about writing rhymes.

Right after I graduated I became a father and my dreams of being a Rapper took a back seat to provide for my family. That time in my life was a struggle and to meet those challenges, I went into the Army.

I connected with a lot of people throughout my career that were part-time musicians/Producers/Artist that were also Soldiers. Meeting these people encouraged me to never forget my dreams and keep one foot in the game. Once I retired, my wife and children pushed me to get back into music because they knew it was what I wanted to do so for the past three years I’ve been making songs, performing and using music as my medicine to cope with the after combat stresses that definitely follow every Soldier around after their career is done.

I love to make songs that people can connect and relate to. The biggest compliment is when someone you’ve never met comments how much you’re song has inspired them or gave them the motivation to get through a tough time. That’s what speaks to me.

I want to contribute to bringing more balance to Hip Hop. For every negative depiction of the hood, there should be a positive. Although you may have to look harder for the positive it’s still there. Most of today’s rappers glorify negativity. Selling drugs/taking drugs and create this false belief like that’s what you’re supposed to do. I never talk about how many friends are dead or in jail from those types of choices. Don’t get me wrong there’s nothing wrong with telling your story, I just feel like it should be done with balance. I will try to be that balance. All of my songs aren’t happy go lucky but I will mix in positive with negative.

What is the biggest obstacle you have faced in your career, and how did you overcome it? I wouldn’t call it an obstacle, I just chose the military over chasing my dream as a rapper. My family needed me to be a Father and Husband first so I put my dreams aside to be a responsible adult. Now that it’s my turn, being older in a genre that is “For The Youth” could be a challenge. Even so, I believe that good music is good music so I’ll continue to make that good music and leave the rest up to the most high power.

What do you want people to remember most about you and your career? I want to be known for my dedication to my creator, my family and my fans. I want to be known as an impactful Artist of my generation and one that spoke from the heart on every single song. Resilience is a word that I want to be associated with my name. Against all the odds, I stayed true to the fact that your dreams only die when you quit chasing them. Let my story be a source of inspiration.

What are you most looking forward to this next month? I’m looking forward to working with Jacqueline Jax and the team at AVA Live Radio to promote my music to a larger audience. I’ll be releasing another single and my goal from this point on is one per month. I have a few live performances scheduled and my first video shoot for my song “Right Back” which is available right now on ALL STREAMING PLATFORMS!!!!

The Song is a dedication to all the fellas out there that have an outstanding woman by their side and they’re not ashamed or too proud to give her the credit she deserves. My wife was the inspiration for this song. It’s not easy being married and it’s even harder to be the spouse of a Soldier, especially one that deploys a lot so I wanted to make a song not only saluting her but all of the women that are the anchor for their man/son/brother or friend.