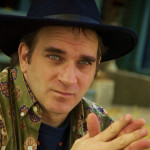 It was no surprise to me when I learned that “A Taste of Heaven” by Radio Drive from St. Paul, Minnesota had been nominated  Best Alternative Song for 2014 by the Hollywood Music Awards. And in September of 2014 Bongo Boy Records included “A Taste of Heaven” on their first Compilation CD release to the  Asian market, among many other accomplishments for this artist including music that has been used on shows airing on Animal Planet and Discovery Channel and having signed to Artista Group, an international management agency.

Produced by Chris Garcia, who is known to bring the best out in engineering and vocal production, this song is certainly no exception in bringing out the best.  The vocals on this track are smooth, relaxed, and deliver the type of vocal this song needed. Neither would it surprise me that this song is doing well in the European market as vocally, Radio Drive’s man behind the engine, Kevin Gullickson, has that distinct European tone to his voice.  In many respects his voice and delivery remind me of Neil Finn.

“A Taste of Heaven” is an uplifting song that will just leave you in a good mood.  Not a jumping-around-good-mood, but a good mood where you feel a certain contentedness and satisfaction for the moment.  This track is full of layered sounds that give an effective backdrop of sound to the track from the very start that drives home the feelings and moods the artist wanted conveyed.  The song opens with nicely textured melodic guitar bits and builds into background vocals leading into the verse of the song, and the video for the song enhances this experience with it’s imagaries, subtle flashes of light, and scenes of two people enjoying each other’s company.  I would venture to say that if you’d like to hear U2, Imagine Dragons, Coldplay, with a touch of Neil Finn, all rolled into one song, then this is it.

The video flows along nicely with various interesting scenes where time seems to go by faster than normal.  I got the idea that this was meant to convey, intentionally or not, of how the relationship the song seems to be speaking of (and video seems to convey) makes you lose track of time and days and hours. Time goes by… unnoticed.  You’re in love. There’s that sense of timelessness when you are lost in the moment – you are enjoying the here and now, outside of time, just like heaven.  So I’m on the right track here aren’t I?  Well, just to be sure, I checked in anyway to Kevin’s interview on A.V.A. Live Radio with Jacqueline Jax from May 27, 2015 to find clues

and here’s what Radio Drive’s Kevin Gullickson says about the song: “A Taste of Heaven… was written to capture the time when I lived in New York City. I moved there in the month November back in the 80s and met my wife shortly afterward. It was such a care free time for us, living in the big city, doing whatever we wanted, all the excitement and variety the city had to offer – and of course being in love.”

Ok, I think I got it right! And my favorite lyrics from the song are (drum roll please) “you fill up and saturate my life with heaven”.  Now go watch the video:

What was I saying?  Oh yeah.. And now back to the nuts and bolts of it!  The song is saturated with good melodies and harmonies which always wins points with me because, well, I’m a melody guy.  As the song and its video progress, by the time you get to around the 3:50 to 4:00 mark, you have a pretty clear picture of what the song is getting at.  There you will find the overlapping of clouds giving a fitting backdrop to the song to relate to the imagery of the lyrics (heaven) overlapped with the artist on his guitar (on earth).

Rays of light, sunshine and positivity dominate and it becomes apparent by then, that the artist is painting a picture of a relationship that is more than just a “taste of heaven”, but at moments, may seem to be heaven on earth, or heaven meeting earth. This leads to the outro with a string arrangement sound that is fitting for such a sonic atmosphere relating to the imagery in the song. And that reminds me, did I mention this is a well constructed song?

It seems to just fly by and at no point was I feeling like I just wanted it to be over already. Rather, it ends by giving the listener a sense of completeness of the song and what he wanted to convey with it.  As an artist, it is always a good feeling when you can look back at the production and know that the producer caught your vision for the song as a team, and the team delivered it effectively.