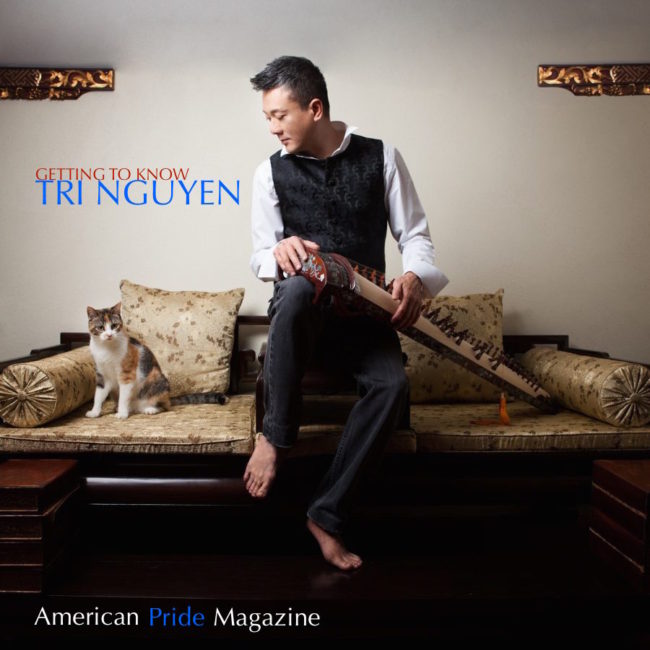 Very difficult these days!
Streaming platforms for example have completely upset the market. Physical CD’s are organizing; people download less and less. That’s why I put an honor in making the best Album Cover possible. Besides the music, visuals are very important @tringuyen888

GETTING TO KNOW TRI NGUYEN
by Jacqueline Jax host of A.V.A Live Radio

Very difficult these days!
Streaming platforms for example have completely upset the market. Physical CD’s are organizing; people download less and less. That’s why I put an honor in making the best Album Cover possible. Besides the music, visuals are very important.

As I said, music business is going through a completely upheaval.
In France, with the current crisis, it’s even more emphasized. Of course it’s difficult out there, were it to be in the music industry or any other domain. Cut throats are out there lurking your every move. But if you have the passion, the guts, the will to overcome obstacles, if you surround yourself with dedicated and professional people, you’ll make it!

I’m confident. What I’m doing in music has never been done before.
This is the very first time that ancient Vietnamese music reaches out to larger audiences in a unique way. It’s the first time that Vietnamese music blends with other cultures and sounds, without losing its way. This allows people who have never listened to Vietnamese before to be able to relate to it, since sharing emotions is all it’s about.
AND there are fantastic people like you Jacqueline who are there to give us a hand!

Making music is also doing business in a way, and as S.H. Britt rightly quoted:
“Doing business without advertising is like winking at a girl in the dark. You know what you are doing but nobody else does.”

Releasing an Album is telling a story through many short stories.
Releasing an EP or a single is making a short story worth telling. In either cases, you have to make the story a good one. An EP is also an introduction to a longer story. That’s what I’ve done with “A Journey Between Worlds”, the host EP for “Golden Skies”. Next album will be the continuation of my musical journey, but with the whole planet!

In all pieces included in both Album and EP,
there is a story behind musical piece/song. This makes the storytelling all the more easier. Visuals are vital, A beautiful cover helps. Stay connected with your fans : I answer all messages and letters, and they advertise for me ! But most of all, I have to stay honest and sincere, If you don’t like your fans, they’ll stop liking you!

Facebook is great.
A have had A LOT of fans thanks to FB and word to mouth is great. But you have to post things on our timeline quite often. Not only music. People out there need to know about you, your life, your pets, (I have to most beautiful cats in the whole universe), your tastes. Sharing is everything, but you have to know where to place boundaries so your private life stays protected.

I wasn’t much of a Twitter guy until recently.
In fact it’s awesome! I’ve had many messages and followers ever since I began to get myself involved with Twitter more seriously, and that’s how we got in touch too dear Jacqueline!

Instagram is fun, I’ll have to focus on that a bit more too.
There’s a market out there. They say Snapchat a “must have”, I’m not on it yet, will have to! Soundcloud is good between professionals. But I’d rather have people listen to my music via Spotify or Deezer! MySpace is a bit “out of fashion”, but I have a few tracks on it.

My father and my late Zither Master.
My father passed away when I was a teenager. He was very proud of my musical facilities and talent and has allowed me to learn all that I know now. I would love to hear him say :”Proud of you son”. – I had a “master/disciple” relationship with my Zither Master. He was one of the LAST from the Old School, with ancient techniques, ancient notations. Old School Music in Vietnam is dying, and I’m one of the last to continue in that path. There where no scores for the Zither with him, he dictated the music and I copied them down as fast as I could. He would be 102 years old this year if he were still alive. I would simply want to say : “thank you master”.

As I said earlier, making music is SHARING with other people.
There is a balance. You don’t lose your soul, but you try to make it pleasant for others. Being selfish when you make music is the worst thing that can happen. But you don’t have to sell you soul either. In any case, the public KNOWS it when you’re not honest. Be open to the outside world! Make music with sincerity AND generosity, make it genuine, that’s the recipe.

“A musician is a blend of hard work, commitment, passion, talent, and love.”

I was born into a mandarinal family extremely attached to old traditions,
in South Vietnam. Aside daily school activites and studies, my parents wanted their children to master the four major arts in ancient Confucianism: music, chess, poetry, painting. Private tutors and professors were invited to teach me these four arts. So I began the piano at age 5 and a half, then the Vietnamese zither a few years later. I was lucky enough to have had the best Zither Master, one of the last to guardians of the Old Music School, now endangered, I never stopped. I also still paint, it soothes my nerves! And I love to cook. I’m a gourmet!

Golden Skies
The ancient vietnamese melody used here (Complaints to the Sky in the Falling Dust) is the same as that for “Golden Skies”, but with different instruments and arrangements.

In the first version,
it is the story of a young girl who met a handsome young man at a flower festival. She instantly fell in love with him and, returning home, prays to the Sky that she may see him again. After the success of my first album “Consonnances”, where “Complaints to….” figures, I felt like the Sky answered my prayers for the success of my music adventure. It was then obvious to me to use this ancient melody again : “Golden Skies” is the outcome of a debut musical journey: the caterpillar becomes a butterfly ; complaints (prayer) to the Sky turned it Golden.

Vietnamese traditional music has never made it outside the Vietnamese
community. At the most, people come listen to Vietnamese music during ethnic festivals, or attract academics who do research on ancient world music. This is the first time that ancient vietnamese music has crossed bounderies to reach larger audiences. Having received two musical trainings: classical western music and ancient traditional Vietnamese music, I set out to create a new style of music. I mixed the Vietnamese Zither with a classical string quartet for the first album. It was a success. But I wanted to go further. So this time, I invited a Oud/Percussion player to mix Vietnamese music with arabic rythms and sounds.

We were only two musicians during the recording sessions,
so after the Zither/Oud soundtake, the percussion was recorded on top of the track. But for future stage appearances, there will be 3 of us : Zither, Oud, and Percussion.

This is a the FIRST time ancient Vietnamese music
is blended with other musical universes, without losing it’s essence, keeping its originality, its beauty, its traditions. But traditions have to be “updated” for the modern world and ear. It’s about sharing AND understanding. If you want to reach out to people with your music, you have to understand them.

It’s one thing to make music, especially my kind of music. But for people to relate to that music is another thing. Being bi-cultural, having diverse musical backgrounds helps a lot. I have been lucky enough to have received an extremely strict and thorough education : western and traditional Vietnamese.

Besides playing the Vietnamese Zither, I’m also a classical pianist. I listen to all kinds of music : pop, world, EDM, classical etc.This helps me understand, in certain ways, how different people listen to different music. It’s like making a gift. It more or less represents your tastes, but then you have to make sure that the person who receives the gift will like it. That’s where understanding and sharing is so important.

The tricky thing to how to balance all this:
not lose the essence of your music, but make it accessible and pleasant to others. And it has to be beautiful. Being honest when composing is essential, you just can’t cheat! People out there know it when you do. I think I made it somehow : you chose to do an interview with me!

I live in Paris.
It’s a beautiful city. The music scene could be better though. For the past few years, national cultural budjets have been dramatically reduced. Only major artists and music festivals do not undergo the crisis …

France is a beautiful country.
I tour a lot during the summertime South of France. The audience is great. But this year, I ‘ve decided to dedicate my time to the completion of my next album. I’ll be playing with musicians and instruments from all continents! Germany is fantastic. The best organization staff ever!

I’ve also done a few concerts in Vietnam, my homeland. It was so
emotional. After so many years abroad, playing for your countrymen was something really intense. I couldn’t help shedding a few tears…

Touring around Europe is on the list.
Next, I hope to make it to the States ! I hear that you get the best audience!

I paint a a lot. It soothes my nerves.
I cook delicious meals (so my guests say), I love watching TV series too! I think that a musician should not bury him/herself in music 24/7. Being connected with the outside world is primary. Music IS life, so you have to be out there! Stay connected!

Very difficult these days!
Streaming platforms for example have completely upset the market. Physical CD’s are organizing; people download less and less. That’s why I put an honor in making the best Album Cover possible. Besides the music, visuals are very important.