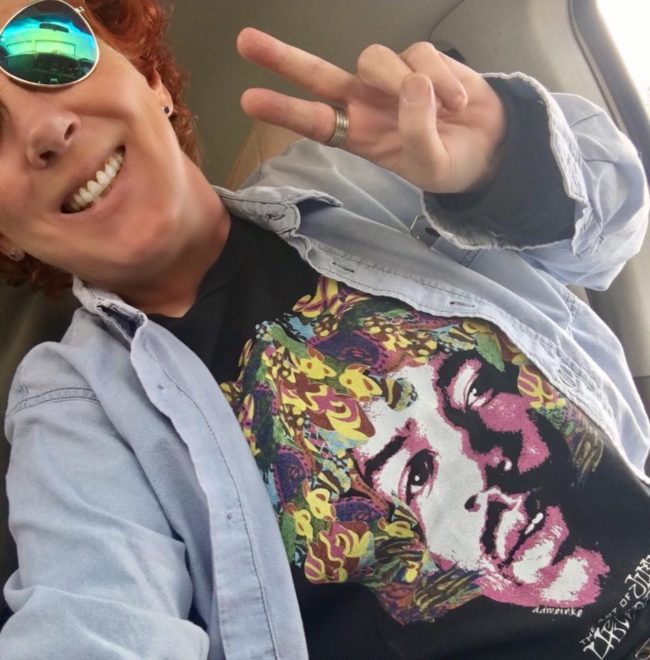 Several years ago my dear friend and booking agent Cosmo Ohms introduced me to an associate of his, Bliss Van den Heuvel. Bliss was an art entrepreneur, and as I understand he made his first millions at an incredibly young age on an antique resale item. Bliss would seek out and then resale priceless rare art and artifacts. He had acquired the original Hendrix art in a closed auction. It was a bit of fluke. One of the storage containers he bid on used to belong to Jimi. There could have been nothing inside, but to his surprise, there was a chest filled with sketch books of his fine art. Bliss began his search for a way he could share Jimi’s art with the world. He sought out others who could embrace the vision to bring the largest known fine art collection of Jimi Hendrix to his fans worldwide. He wanted Jimi’s fans to know that Jimi was much more than a music icon, world renowned guitarist but also a fine artist as well.

As a guitarist, musician and avid fan, I decided to take on the project initially because of the profound respect I had for Jimi as an innovative inspiration to my own music and life.

Coupled with a tremendous opportunity to develop my own artistic branding skills, I saw this as training ground for where I wanted to take my own art.

Following the signing of my first contract with Hendrix Original Art Expressions, I created a commissioned piece which was slated to front the campaign. As exciting as it was to have been afforded this opportunity, sadly I was unable to speak about it during the developmental stages.

For approximately three years, I worked diligently under a non-dis-closer agreement. The commissioned piece was representative of Jimi and the setting for the painting was to be Jimi’s imaginary art studio. I worked closely with the owner and did my own studies to wrap myself around the spirit and soul of Jimi the best I could. I did a series of paintings and sketches of him at every possible angle to prepare myself for the work. I was extremely driven, focused and determined to give this project my 110% to do my part to help make it successful. 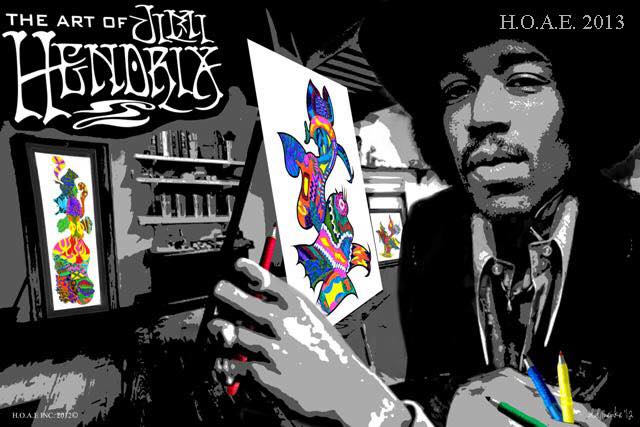 In the original painting composed of three blank canvases, where three of Jimi’s digital giclee’s original pieces. The entire work was then embodied and copyrighted as one piece. Last July 2016, the piece made it’s official debut appearance at Caesar’s Palace in the Gallery of Music & Art fronting selected pieces from Jimi Hendrix’s fine art collection. The display remained in the gallery for an unprecidented six months. 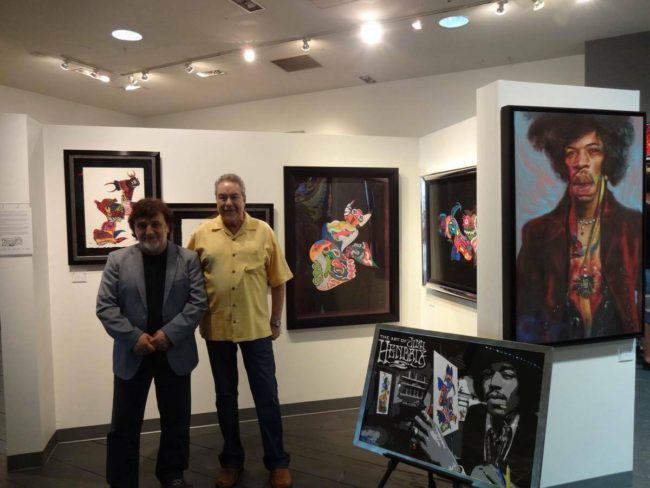 After the commissioned piece was complete, I then was given a contract to develop and brand Jimi’s art. I have been on board for approximately seven years. I was given carte blanche access to his original art, to design at will along with some specific requests and provisions. I quite literally was given legal permission to cut and segment Jimi Hendrix’s work, that alone as an artist was mind blowing at best. Of course, I cut & segmented the digital versions and not the actual originals. Each piece was scanned in at high resolution and then I manipulated them to create the designs. I was highly sensitive to segmenting his art. I didn’t want anyone to think I was going about it without thought and respect for Jimi. I worked long hours to do my research and found out as much as I could about him so I could do justice to his memory, and talents. 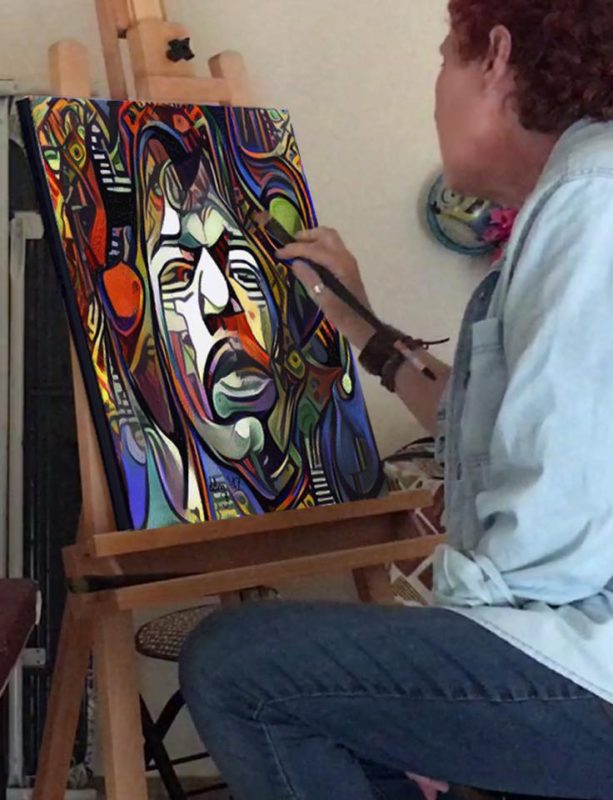 When I was working I would often imagine him sitting right next to me. I would visualize him smiling as if to say he was okay with all that I was doing. Leon, his brother and I also collaborated on several of the branded images which were produced at that time. Those specific designs have the combined energy of all three of us: (Jimi, Leon and myself). Those have not been released yet as well as many other designs in the portfolio.

As many are aware, and it’s been highly publicized, the Hendrix family has been plagued for years with division over Jimi’s estate. The countless lawsuits have prevented the full scope of Jimi’s talents to come forward. However unfortunate, this is often the case and not uncommon among family members of iconic superstars.

How did you manage to not become defined by this very recognizable work?

Although I didn’t want to be remembered only by the work I did with Jimi Hendrix’s art branding I am honored to have been afforded the opportunity to work so intimately with his art. No-one can take that away from me and I wouldn’t want anyone to. I always desired to be successful to some degree with my own art. I wanted it to stand on it’s own merit and when people saw it they would know it was my work. Initially my focus on my art was to support the music marketing efforts for branding my Dianne, Sera de Morte’ & the Stiffff Kitties projects. 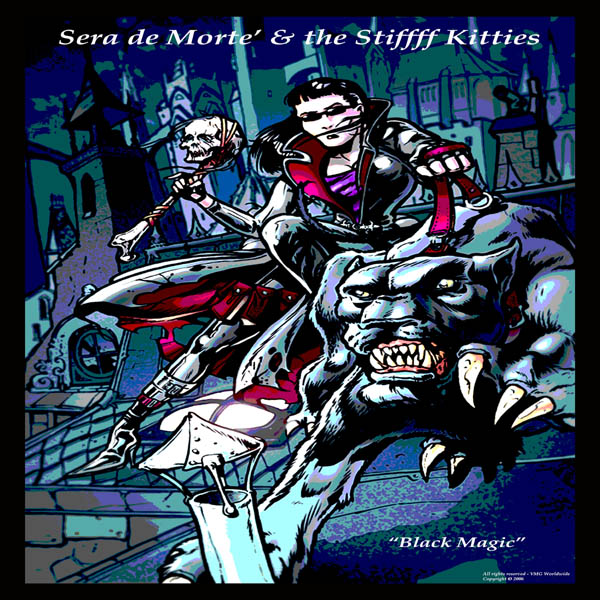 The experience certainly helped me develop the skills much needed and required for the Hendrix branding. For me the clear line for being defined as Dianne the artist vs the Hendrix Art branding artist, has been the hours of hard work, absolute focused and driven unrelenting determination, and most importantly, consistent dependable delivery that I gave my own projects and then kept on giving.

At what point did the style become a brand?

My art styles were and still to this day are all over the map. Different mediums, different subjects from the Gothic to flowers and butterflies. When I decided to get serious, I approached my friend Liane Langford, actress, producer, professional art curator, tremendously talented and beautiful woman. Her associate in art is well known in the art world, Chris Winfield from Winfield Galleries.

Liane’s recommendation was to have my art evaluated. The outcome of the evaluation was that I needed to focus more, find a style that I was excited about and my fans loved and stick with it.

I could still do all my other styles, mediums in the background but as for the branding I needed to find out what that groove was. I took their advice to heart, and then began working for nearly two years utilizing some of the same exact principles I applied and knew worked with the Hendrix project to my own work. 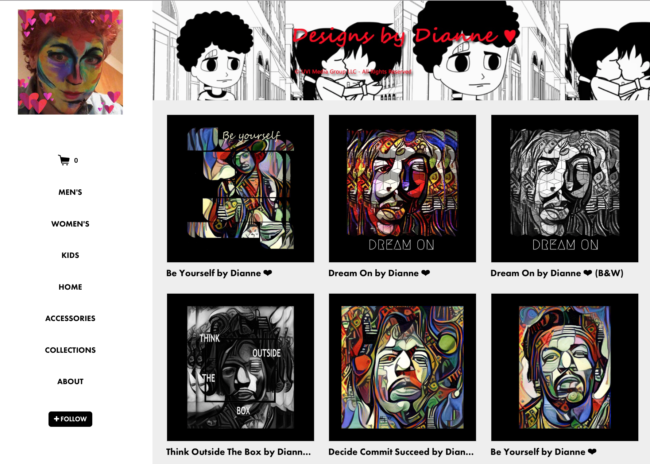 I began experimenting on a small scale with a few design techniques i.e. on T-shirts and limited merchandise I seeded the designs around the web on items not normally high volume products to see if anyone would bite. To my surprise, I had sales in one particular style the most. I was selling a ton of stickers, note pads and pin back buttons with this style on it. I thought to myself…perhaps I might have something here. 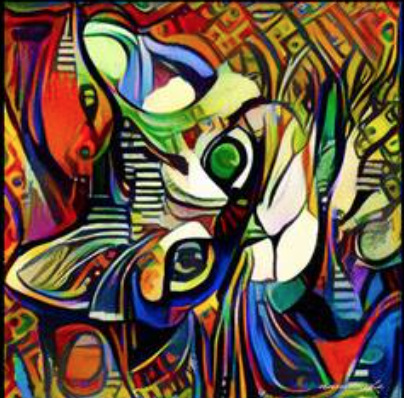 “I just recently I received a private message from Liane and she said “keep up the art and the music !! “ I chuckled… I must be on the right track, hooray!”

What have you learned from the project?

Due diligence, Never give up… the journey is for the long haul.

Work hard, long days, no sleep. Results don’t always come as anticipated, pay attention to the details, refine the process, then refine and then refine some more. When I am done refining,  I’ll be pushing daisies. I want to enjoy it.

If I am not refining the process then I would be bored out of my mind. I do what I do because it’s all for what I love to do most. I love to see the looks on peoples faces, people smiling, happy and connecting because of it.

What top 5 things have you learned about branding?

Not every image created should go on every object. There are merchandise creation sites where you upload your art and they will put your image on ever—-ree–y thing. Looks worse than your neighbors garage sale and that’s where it’ll probably end up.

Not every painting or artwork is a good branding design. Some are meant to just remain a painting, a sketch, etc.

Color, text and balance are very important to a successful design. Where you place the image, the contrast, the tone and the vibrance are crucial elements to consider. The type of font, size of font and most importantly font placement can make or break a successful design.

When you are ready and have a design you think will work, test it first. See if it will sell and on what. Make sure the QC is good. This is so very important! Purchase it yourself. If you are not excited enough to buy it at wholesale, don’t expect anyone else will at retail.

I was taught this principle by a very prominent art instructor and professional artist with deep roots in the business world, a mentor of mine. Never, Ever, Never discount your work… once you do you’ll never get back the amount you yourself depreciated it.

You may also enjoy: 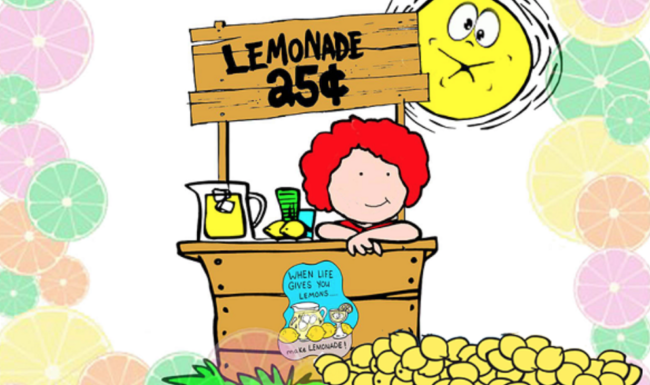