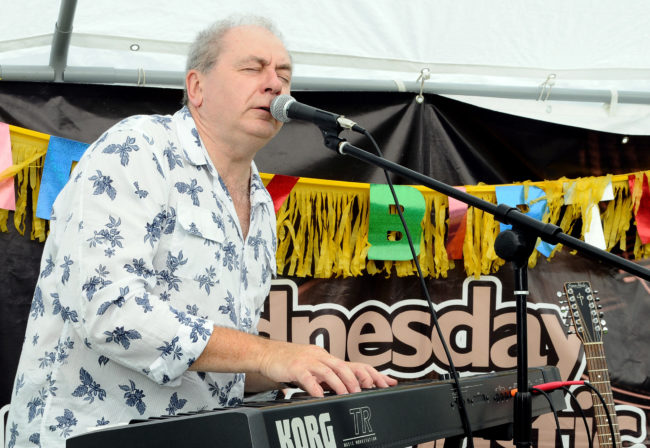 As I continue to create, my songs are becoming more precise on the arrangements and delivery, though I like to keep that live acoustic feel. My earlier recordings often had much longer solo breaks. I don’t want to dispense with these completely, but to balance them up with more compact songs whilst keeping good song structure and meaning. Anne and I are planning a new album for 2018, and in-between, I also plan the release of some of my solo work, perhaps an EP.

As any songwriter often does, I find myself challenged to become more innovative with my technology.

At the moment, I am using a Roland keyboards whenever possible and have a vintage Roland D50 synth which has been with me, through thick and thin from gigs to recordings. The string sounds are amazing yet very analogue which fits in really well with the acoustic roots approach.

I was lucky to do a gig once with Maart Allcock, who was a member of both Jethro Tull and Fairport Convention. He was a D50 fan as well and he gave me some of his original sounds that he had programmed and used with those artists. I still use those sounds to this day!

A few years back I bought a stand-alone Roland 24 track recorder/music station and still use it. The post-edit facilities are a bit limited, but that increases your motivation and effort to play it right as it’s being recorded. It also means that I can pretty much record when I like and spend as much time as I want in the studio – so most of the cost for me is in the mastering (I always get that done externally) and cd production, although future projects may well be virtual albums on Spotify, Itunes etc.

I tend not to write new songs in the studio and usually start my studio work by laying down a keyboard or rhythm guitar track, then building up from there multi-tracking instruments and vocals. Most of my studio creativity is focussed on arrangements, deciding which sounds and instruments to use etc.

It’s a month since my Ridgeway album was fully mastered, so this last month has been about making sure the cd manufacturing went ok, putting the album on Spotify, iTunes etc and approaching radio stations and others to market the album. However, I have also started a rough outline plan regarding new songs and CD releases for 2018. This activity is just the natural consequence of completing the album, so the activity chose me, not the other way around!

I often start with a simple idea (usually in the middle of the night) and try and think of the end product that engages the audience – is it a moving ballad flavour, or perhaps a more direct message; anything goes at this stage? Then I choose either guitar or piano to start off the writing process, either with or without lyrics.

I usually evolve a song over a couple of months. It may be 90% written in the first week, but there’s always something later that pops out of my mind, whether a change of a chord, or a phrase or word that can be expressed better. I tend not to go into the studio to record final versions until I’m happy that it’s a ‘settled’ song. I usually record a very raw version early on, so I can step back and take a listen from a different perspective. It is sometimes a cringe-worthy, but very useful approach!

As well as my Roland keyboards, but I also like my Simon & Patrick 12-string guitar. I’m more a rhythm than lead guitarist and the 12-string often brings out unique harmonics in a chord. However, sometimes I revert to a 6-string if I need a less complex sound. The 12-string is great for live gigs – it sounds like I’m playing three instruments at once!

3 things you’ve learned this past year..

1. Although I don’t normally write songs ‘to order’, I did set aside a couple of months at the beginning of 2017 to focus on writing as first priority. That worked out and produced 5 songs for the Ridgeway album, so for me, creating some song writing ‘phases’ during the year is a good strategy.

2. I also learned to throw songs away! Not everything I write delivers what I expected – sometimes better and sometimes worse. So, I now persevere with a new song, but if it isn’t gelling, let it go. If there are some decent parts in it like specific lyrics, or a middle 8 or whatever, they will usually re-emerge in something else I’m writing later on anyway.

3. Having a guest artist on an album for me has been a great plus, particularly a quality female vocalist like Anne. However, as I manage the whole studio process myself, I have needed to be more technically adaptable and disciplined with the recording equipment to make the most of her time and abilities.

FAVORITE QUOTE:
I have a non-musical quote but it’s about success. As an ex-scientist, I rather like the Albert Einstein quote ‘Strive not to be a success, but to be of value’. If I can write and deliver music that people appreciate and feel is worthwhile, making them think, be reflective, happy or whatever, then I feel that I’ve added some value. If I can do that for as wide a range of people as possible, I’ll feel I’ve succeeded.

INFLUENCES:
I consider Steve Winwood to be the complete musician – great voice, a wide range of song writing ability, at home with a range of styles around rock and acoustic, excellent multi-instrumentalist and all-round talent!

Music Genre:: Acoustic Roots (with twists of blues, ballad and rock)
This song is about a vivid dream that my friend once had and he scribbled down a poem about it as he woke up and came back to the real world. I took this poem, turned it into lyrics and added the music.

The music that I create has acoustic roots with a twist of blues, ballad and rock’. Lady Mary is a track on my new ‘Ridgeway’ album. I had one of my band colleagues, Anne Cunningham, in mind to sing this and she ended up singing on most of the songs on the album! She’s a great addition and her vocals complement the music very nicely. Lady Mary is a good example of my style of ballad writing, but as the album develops, the songs also include rock, blues and acoustic guitar themes as well.

As I continue to create, my songs are becoming more precise on the arrangements and delivery, though I like to keep that live acoustic feel. My earlier recordings often had much longer solo breaks. I don’t want to dispense with these completely, but to balance them up with more compact songs whilst keeping good song structure and meaning.
Anne and I are planning a new album for 2018, and in-between, I also plan the release of some of my solo work, perhaps an EP.

I sometimes collaborate on lyrics and vocals, and on the new Ridgeway album one of my ex-band colleagues, Anne Cunningham, provides excellent vocals on the majority of tracks. With the music and arrangements, I usually do all of that myself.

Keeping the balance..
A lot of my life is about creating something, whether music, renovating the house, redesigning the garden or whatever. I’m not in full-time employment now so the music is my main focus. I have to balance the writing and playing. This bit comes fairly naturally to me, but the marketing in an increasing complex digital world is tricky. It’s a learn as you go process. I’ve set up Best Room Songs on Facebook and YouTube to play some of my songs. It’s fairly simple often just a piano or guitar plus vocals.

What piece of music advice forever changed your way of thinking?
When I was fourteen, I was an average piano student trying to sight read classical piano pieces. My teacher was my Grandfather, who was an excellent pianist, organist and choirmaster – a lot to live up to, especially as I had a very classical musical family all round me! One day I was grinding my way through a lesson and said ‘Alan, you don’t practice enough and there’s no point continuing like this – it’s wasting my time’. Long pause, then, ‘However, how about doing some music theory for a couple of years?’.

That changed my life as I soon understood chord structures and the like, so if I listened to Led Zep, Santana and other albums, I could easily recognise the chords. Soon I had a queue of school friends asking me to write the chords of their favourite songs and it opened up the opportunity to join rock bands and get into music that way. Also, piano is a great instrument to lead you into playing other instruments like guitar, bass and drums.

This next year I will be continuing to market Ridgeway and also completing the songs for the next album, and recording the album itself. There are 6/7 songs so far broadly written and planned but I need another 5 or so new ones. The next album will again be with Anne on vocals and will be the follow-up album to ‘Ridgeway’ in the acoustic/roots style.

However, I also have an EP of already recorded solo work in a piano-led more rock style – someone called it a cross between Bruce Hornsby and Jean-Michelle Jarre! It would be nice to release that as well, but as it’s a slightly different style, I’ll need to think a bit more about how to market it alongside the new album.