The emotional challenge is to keep the dynamics and feel of the song while adding all these instruments, as often the initial intent can get lost in the mix. Mentally, when I’m recording instruments or vocals, my mind is working as though I’m part of a band, not a soloist.

Artist: Alan Garmonsway
My musical life has gone through four phases, each one challenging and rewarding in its own way.
Firstly, learning instruments and music at school age, settling on piano and guitar but getting involved along the way with violin in an orchestra, drums in a Glen Miller style band and soprano then bass in various choirs.
Joining both rock and acoustic roots bands, playing keyboards, 12-String and backing vocals in each, but with very different material and arrangements.
Going solo live, again with keyboards and 12 String, but also writing and recording a lot more original material. Sometimes simple guitar/vocal and sometimes much more complicated multi-tracking.
Finally, now – focusing on writing and recording original songs in quite a few different styles from acoustic roots to much more rock and blues based. 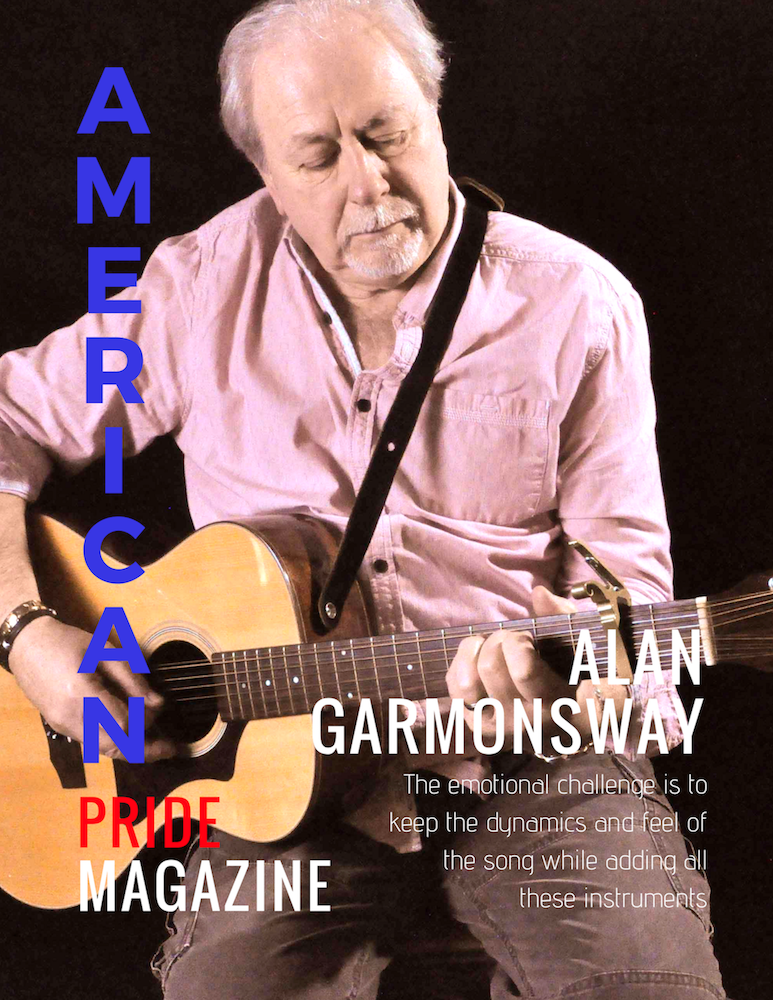 Song name : Our Different Ways (from the new EP City Canvas)
Music Genre:: Rock – featuring keyboards
The inspiration for this song came from a newspaper article I read about a professional and well-regarded medic who, through a series of unfortunate events, ended up on the London streets. That made me think a lot, as I could see some parallels with what I was experiencing at the time, although I had a roof over my head.
The song ‘Our Different Ways’ just tumbled out one evening, I think partially as therapy and partially to warn myself to get my act together. I’d like to think writing and recording it helped get back my focus and sort things out. I hope the same happened for the medic, who I called ‘Dave’ in the song.
As the chorus says, ‘He relied too much on emotion, wore his heart out on his sleeve; It all ends in commotion, and then he’ll have to leave; But I guess that we all have our different ways.’

As I developed the lyric video for the song, I found photographs of ‘Daves’ from all over the world, so although initially about a London experience, it could really be any town or city.

City Canvas My ‘City Canvas’ ep follows some of the highs and lows of my life, many of which have involved relationships and linked with certain cities in the UK and US. Each of the six songs on the ep was the result of a particular story in my life, so putting the ep together felt a bit like painting an emotional picture of myself on canvas, hence its title.

I’ve always been attracted to versatile bands that use strong interplay between keyboards and other instruments. Steve Winwood of Traffic, Bruce Hornsby and the Range, Ben Folds Five, 10cc etc. Music which uses the instruments well together and generates more than the sum of the parts, with light and shade in the arrangements.
Early in a new song I just use either piano or 12 String plus vocals. But I quickly start to visualize how the end product might sound – the highs and lows of the song, possible instruments, song structure etc. That’s the starting point.
With most of the songs on ‘City Canvas’, there is a fair amount of multi-tracking. I usually start off recording a keyboard or rhythm guitar track first to dictate the pace and structure. Then add drums/percussion and bass. Once I have this sound ‘triangle’, I can relax a bit and add vocals – lead and backing, then solos, fills etc.

The emotional challenge is to keep the dynamics and feel of the song while adding all these instruments. As often the initial intent can get lost in the mix. Mentally, when I’m recording instruments or vocals, my mind is working as though I’m part of a band, not a soloist. That helps to keep the emotional feel of the song together. Also, I don’t rely too much on post recording editing, but prefer to spend the time rehearsing so I get it right as it’s being recorded.

I have recording equipment, so studio time isn’t an issue. On ‘Our Different Ways’ I thought I’d finished it, but had a niggling doubt about the keyboard solo. One night at about 2.00am, I suddenly leapt out of bed. I woke thinking – I can do better than that and spent the next two hours in the studio – the solo you hear on the track was the first take from that session!
I love all my Roland keyboards and sounds – they feel very natural to me and suit my playing style. Sometimes I work with others in the studio. It depends on what the songs need, and am happy to have others involved when it feels right.
I live near Newbury in the UK. The music scene is varied – we have pubs, music clubs, small and larger theaters all within a 20-mile radius, so there’s plenty of choice. Also, London is about 50 miles away and there are tons of other towns and venues in between.

I’m lucky to also have a house in W France, and the music scene there is much more communal. It’s a very rural area, so towns and venues are spread out over a bigger geographical area. Consequently, the towns organize a lot more festivals with very diverse music.

There is a big music festival all over France on 21st June each year.  I’ll be playing there this year on an outdoor stage in town. One of the more amusing sights I saw one year was a rock band playing on a street stage. Then stopped dead in the middle of a song so that a brass band could march past the stage, then resuming their song again. Evidently the marching bands have priority over all other music on that day!
I was at a songwriting seminar last year and the speaker said ‘80% of success is turning up’. Whether that be open mic nights, on social media, going to songwriting seminars mixing with other musicians and songwriters or whatever. This seems to ring so true with much of AVA’s guidance on developing your consistency and presence in social and other media.
I’ve focused on three things in the last month.
Firstly, getting my alangarmonsway.com website up and running (thanks to AVA). This gives me my little part of the web, which I can develop as I wish and link into social media and other sites.
Secondly, focusing on the completion and mastering of the new ep ‘City Canvas’. This is a much edgier rock approach than the last album ‘Ridgeway’, which was perhaps more acoustic roots. Putting the two different albums together on the website gives a broader illustration of my writing and recording scope and styles.
Lastly, continuing to promote the recent ‘Ridgeway’ album which featured Anne Cunningham on vocals. Mainly through social media and various radio stations. We have some live podcasts coming up as well. I’ve also started getting involved with more video work – both recordings and live.

I’m getting more familiar with all aspects of using social media to try and keep a consistent presence externally and to share my journey. Though it’s still a big learning process!

I’m finding out ways to use internet radio to gain more exposure for different songs and my message.
Just generally developing myself as an all-round musician, taking care of the outward facing approach as well as in the studio. I just feel more like a total musician developing the external persona as well as through the music.
I have quite a few new songs ready and waiting to be recorded, so I’d like to move them forward. My plans are for some of them to be recorded solo, some working again with Anne Cunningham and some in a studio in North East England with some longstanding musical friends.
I think I know which songs will work best with each approach, but it’s always a bit flexible depending on how the songs develop.
I’d also like to keep getting better at all aspects of what I’m doing, particularly at the marketing approaches. I’d like to get to the end of the year and reflect on how much I’ve learned this year.
Website & social media links: :
Website – www.alangarmonsway.com
F/B – www.facebook.com/alangarmonsway
F/B – www.facebook.com/bestroomsongs
Twitter – www.twitter.com/bestroomsongs
I/G – www.instagram.com/alan_garmonsway
Y/T – https://www.youtube.com/channel/UCxNHJZBeYeDpV-nqzvOFHng (YouTube BestRoomSongs videos)
Spotify –  http://open.spotify.com/album/09EIDV999GwG8kKo9VZeBT
iTunes/Apple Music – : https://itunes.apple.com/us/album/city-canvas-ep/1372116492?ls=1&app=itunes
https://www.youtube.com/watch?v=l6ix5xwqE5I&index=2&list=PLERjR4uzs9ee3WBa2Z9GcOIqJNEDbsWnn
https://www.youtube.com/watch?v=QmSd1uLeG1g&index=1&list=PLERjR4uzs9ee3WBa2Z9GcOIqJNEDbsWnn
Alan GarmonswayFranceKeyboadrockUnited Kingdom
By adminJune 13, 2018FEATURED POSTS, LATEST, MUSIC