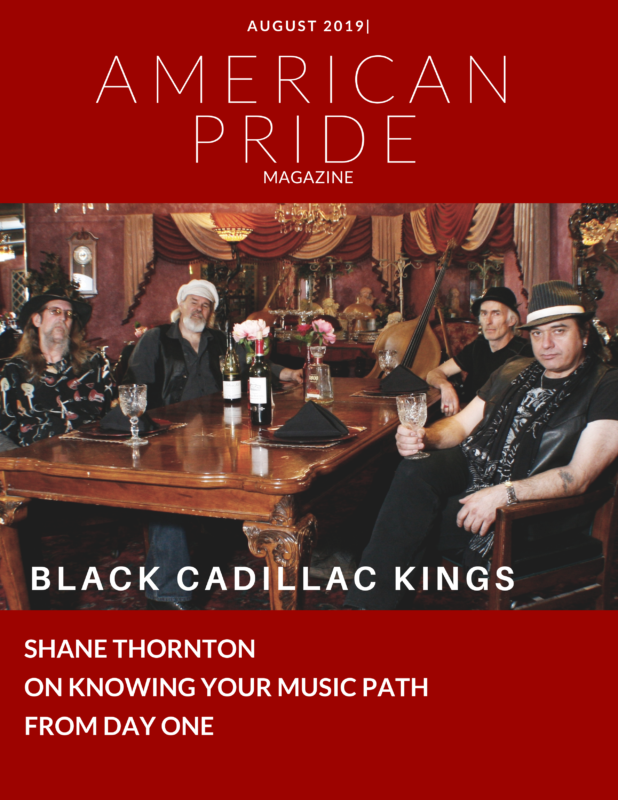 I spend most of my time writing, recording, producing, performing, promoting music. When I am not, I am in the woods chilling with my lady and dogs at a lake or river.

I was two years old when I started performing. I would have a comb for a microphone and put on concerts for my parents and their friends. They were only 18 years old with a 2-year-old. My folks were just babies themselves. I somehow knew all the lyrics and vocals to every CCR and Neil Young song we had in the record collection. At 8 months I could speak full sentences so speech and singing came quick and easy for me. I got hooked on the records my Dad would bring home like Steve Miller, Bad Company, Beatles, Rolling Stones, Boston and such. It wasn’t till I heard Back In Black by AC⚡️DC when it all really changed for me. That album lit a fire that has never gone out.

The power that it had, the lyrics, the guitars and the vocals all mixed together made an impressionable 12-year-old take notice. At this time I began to pick up my mom’s old Lyle six-string that had been leaning in a corner since their 3rd wedding anniversary. A gift from my Dad to her. She showed me my first chords and how she stunned the rhythm with her pick hand in unison with her left fingerboard hand.

It took fairly fast and that was the first time I had looked at my mom as amazing. From then I taught myself the Malcolm Young style of rhythm guitar and have prided myself as a solid rhythm player. My solo picking has never been my strong set and I know a few cool licks and can jam along with the best. It is the rhythm guitar that struck a chord in me. I create music because at an early age my purpose was presented to me by God and I grabbed ahold of it and embraced it because I knew it was a part of me that would always be here with me.

Music enriches my life in a few different ways. I love to be in the creative process and everything that comes with it. Writing, performance, and studio where these are all very satisfying. Seeing and hearing your ideas being played back to you with superior sound quality is exciting! It’s like building a house.

The drums and bass are the foundation, the guitars, vocals and melodies, and the walls and roof. The feelings, messages, and emotions are what fill the inside that makes the house a home.

I get massive amounts of joy from music. Performing live is an example, we play a song that we enjoy and get joy from that. We see people start to dance or start singing the lyrics with you, so now they are getting joy from dance and singing. This, in turn, sends joy back to me seeing the audience get joy. 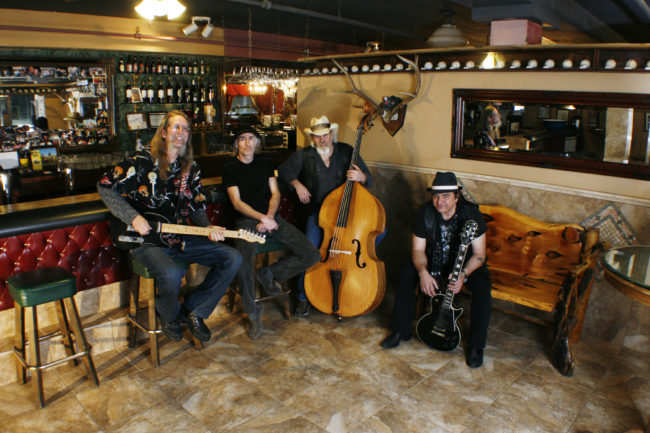 Early 2014, Vic Picks (lead guitar) hooked up with Shane Thornton (Lead vocals/guitar) to form an acoustic 2 piece band called “Black SVT”. They started playing gigs around southern/central Oregon and became the house band at The Pikey, an Irish Pub in Klamath Falls, OR. Vic knew drummer/singer Chris Garrett since they both had a country and blues bands in Klamath Falls together. Garrett came with the reputation of being a hard-hitting musical drummer that could sing lead and write great songs.

With their blues band, was stand up bass player Otis Dean Oliver who had earned himself a name in the blues/country scene as solid bassist with chops to boot. Vic asked Shane to sit in on vocals and rhythm guitar for a few gigs. The blues band eventually became a new 4 piece that became “Black Cadillac Kings”. Their rockabilly/blues/rock n roll/country style meshed together like a well-oiled machine.

The guys started writing originals and have become very well-liked by a diverse fan base of young and young at heart with the revival of American roots/blues-based music.

Be on the look out for the Black Cadillac Kings rolling through your town with whiskey on their breath like a tumble weed high on octane!

Guitar, Slide guitar, mandolin. dobro, banjo, ukulele and vocals. He has played in bands that have opened for international concert acts such as STYX, Waylon Jennings, Kris Kristofferson, Blues Image and others. He has also been a music teacher for 24 years.

I am from Big Rapids, a small town in West Michigan, I’ve been playing bass for over 45 years. I think I was about 15 years old when I started. My roots were in Country, but I have played many types of music including rock, blues, bluegrass, and rockabilly.

I moved to Oregon about 20 years ago, since then I’ve played mostly blues, until recently, some of my blues bandmates include Dr. Mongo from WY, Harry Harpoon from CO and Baltimore Red Jones from MA. We competed in the International Blues Challenge as The Perfect Bedlam Band in 2009. Performing mostly acoustic blues.

I started playing the standup bass about 12 years ago. There’s nothing like that great natural acoustic sound and energy that derives from it. I believe I’ve gone full circle, playing great music with great people, just like I did in my early years in the music business. I feel really lucky. It’s not every day that things just click among musicians the way it does with Black Cadillac Kings.

I started playing drums in grade school and played in several bands throughout high school. Moved to Los Angeles in the mid-80s playing drums for a few Southern California rock and country acts.

I moved in 1991 to Seattle and got a recording deal at Triad studios and recorded several original tunes and has continued writing songs today. Played the drums for a few Seattle bands then moved back to Southern Oregon in 2010. Soon after, met Vic Picks and formed a band called Damn Near Famous. When DNF diss banded, joined up with Vic and Shane to form Black Cadillac Kings.

Our new single “Upside The Wall “ is about

The crazy times spent with hotness and unbridled passion of lovers that can’t get enough of each other told through articulate lyrics describing their adult escapades though race car sexual innuendos until the climax car crash at the end.

This release represents the current direction of the band very well. Upside The Wall definitely sounds like a Black Cadillac Kings’ song to me. It’s a bit faster and upbeat and has a harder edge sprinkled with harmonic melodies with hard yet tongue in cheek playfulness in the lyrics that fit with our fondness of motorized vehicles. If you go back to our first album, “Baby Loves My Hotrod “ is definitely in the same vein as this song. It’s hard bluesy Rock n’ roll with lyrics that reflect cars and sex as almost being the same. Both songs are ‘Show stoppers and Panty droppers’. Meaning they bring a fun sexy mood with them and leave you satisfied but still wanting more.

The harder guitar tones fit well with the be 4 On The Floor release because the record as a whole has a darker feel with other songs such as “Everlasting Pain” and “Tear Dust Blues”. 4 On The Floor is BCK’s darkest and heaviest sound to date.

Basically, I had the song done in my head and I showed it to Dean, Vic, and Chris on just a 12 string acoustic. They learned the chords and arrangement and then added their personal touches and flavor to finalize it into a Black Cadillac Kings tune. I had an idea that “Upside The Wall” would sound amazing with some Honky Tonk piano for a southern rock feel. I called our buddy Robert Harlow who sat in with us live many times and also laid down Hammond organ tracks on our previous release. I explained my vision to Robert and sent him off with the rhythm track. He came back with the perfect honky-tonk piano part and well.

A song in perfect form and arrangement in the end. 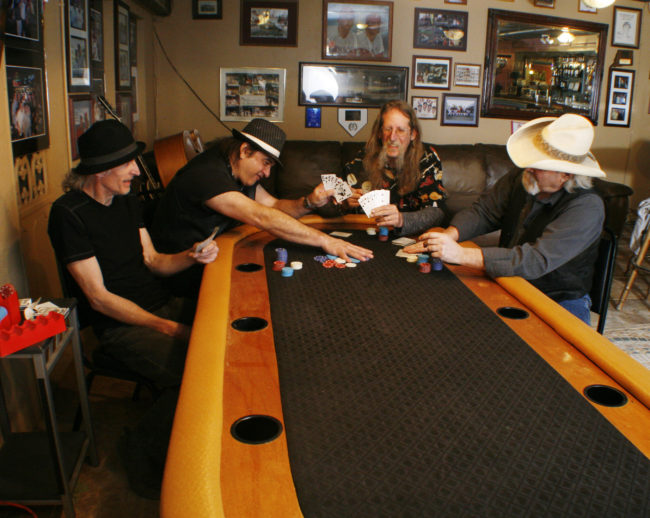 Who have been the most influential in your music?

My parents, my family on my mother’s side are all very talented and I am glad to be a part of it all. There is always live music and instruments at our family gatherings which leads to fun jams and excellent quality family time spent.

My favorite instrument is..

the guitar (Big surprise). She was my first love and I will never leave her side.

The music business and being a musician today for me means not what it used to be. The days of major labels controlling it all is almost to a close. Careers are now in the hands of the artists. Indie artists have the most control over their music these days more than ever. It is an exciting time to be an Indie musician. If one is open to learning the ins and outs of music promotion today, it is a great opportunity that wasn’t available before.

Surround yourself with great, passionate, hard-working, honest people to build a team with the same dream. I really love helping other artists move forward in their careers. I love it when bands in town or community/scene completely support each other’s endeavors. This is happening in my small town right now and it’s wonderful.

I get massive amounts of joy from music. Performing live is an example, we play a song that we enjoy and get joy from that. We see people start to dance or start singing the lyrics with you, so now they are getting joy with dance and singing. This, in turn, sends joy back to me seeing the audience get joy.

I hope to leave this world with a musical legacy that has touched souls and healed hearts and brought in surmounted joy to its listeners and keep the remembrance for many generations after I am dead and gone from this work. 🕊🎶

What is the biggest obstacle you have faced in your career, and how did you overcome it?:

The biggest obstacle is procrastination and laziness. Basically getting out of our own way and put action to ideas when promoting the band.

What do you want people to remember most about you and your career?

That the songs spoke to people/a person in a special way where they can take the price of that song that connects with them on deeper levels only for them to understand.

Going to Atlanta, Georgia for the 2019 ISSA AWARDS (International Singer-Songwriters Association) on August 2nd and 3rd. Our band has made the finals in 3 categories for a Gold, Silver, or Bronze Awards for

*Entertainer Of The Year

*Band Of The Year

They have also asked us to perform at the ISSA AWARDS PRE PARTY at the Hard Rock Cafe in downtown Atlanta. (The Party was moved to the Wild Wing Cafe in Dunwoody, GA after the event sold out and could no longer hold the capacity made by booming ticket sales.) We will be touring there and back from our hometown of Klamath Falls, OR. I think it is a great and prestigious honor to be ranked so high in the Indie Artists community. To be nominated is a thrill! To be in the finals for the running is mind-blowing! And to win would be a dream come true!