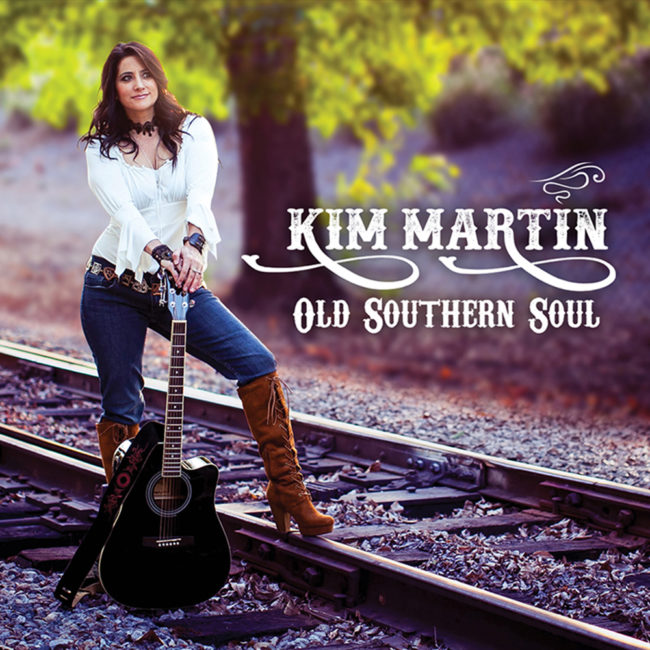 Kim’s passion for music covers many genres, but she has always been drawn to the story telling in country music and her song writing naturally flowed in that direction, along with a blend of her first love Southern rock. She is now ready and excited to share her music with the world!

Kim is currently in the launch phase of her self-released 2017 EP ‘Old Southern Soul’ on her indie label Bellavicious Records. Old Southern Soul is the culmination of genuine heart with a fresh outlook on the country scene. It’s got that chilled California vibe intertwined with the grit of Southern rock.

From the sunny suburbs of Los Angeles, CA, American Country artist Kim Martin is turning heads and gaining fans globally with a sassy blend of California-Country that has a splash of Southern-Rock.

Kim grew up in the foothills of Hacienda Heights, CA and currently resides in the Inland Empire. Already well established as “one of the hardest working musicians in So-Cal”, she’s a country girl at heart with rock & roll in her soul.

In a sea of emerging country artists, Kim stands out not only as a singer/ songwriter, but also as a fluent bassist and lead vocalist, with an extensive and versatile range of influences ranging from Linda Ronstadt & Dolly Parton, The Eagles, Alabama, Gretchen Wilson, Willie Nelson, Skynyrd, etc. who all combine great story telling, harmonies and strong vocals with memorable melodies.

Kim was introduced to producer/engineer, Hank Linderman in January 2015 at The NAMM Convention in Anaheim, CA through her good friend James Grover. By April 2015 the recordings were underway at Parsons Green in Los Angeles.

Being a bass player first, Kim had to have a guitarist to collaborate with. Hank was that guitarist. He is a master at his craft, knows exactly what the songs need and brought out the best in Kim. She knew she wanted a fresh country sound with southern rock flavor and with Hank’s “genius” and being a multi-instrumentalist, they achieved that, blending acoustic, electric, lap steel, pedal steel and resonator guitars, along with banjo, fiddle, electric bass, drums, percussion and Kim’s powerful, signature vocals and harmonies.

Self-taught on acoustic guitar, Kim wrote all her songs while strumming her six-string, except for the ballad, “I Stayed” for which she used a keyboard.

Kim comes from a musical family where singing came naturally. She started singing in elementary school and started playing bass at age 14 after finding her older bothers old bass in pile of junk while cleaning out the garage. Music is in her heart and soul, it’s what moves her inside out. She is also a graduate of Berklee College of Music-Boston MA, (Bass Guitar) and Grove Music School- Van Nuys, CA (recording/engineering).

Kim is a full-time musician and has performed over 200 shows a year over the past 13 years while managing her cover band, The Kim Martin Band. She is also honored to be a crowd favorite at The Costa Mesa Speedway for singing The National Anthem. She is now the first Country artist to be sponsored by Chromacast Gear.

In July 2017 she enjoyed a week residency at The MGM Grand Arena, Las Vegas as a Lead Vocalist in The Kevin Eubanks Band (Leader of The Tonight Show Band) for the Microsoft Convention 2017. In December 2017, Kim and her band were featured on the TV Show Musicology, on PBS.

This song is about…
Old Southern Soul is a nostalgic song about having an extreme fondness for the South while being from somewhere else. It’s the rowdy memories from another time and place, possibly an outlaw of some sort! Whiskey and trains are the links between now and then.

Some of my songs come from things in conversation, this was one of them. It’s part true and partly my vivid imagination. I was playing a weekly Wednesday acoustic gig at a local club for a while and the special was 2 for 1 “Whiskey on Wednesday”. Well, when you’re playing in bars, people always want to buy you drinks, so after some Apple Whiskey one night I said “Whoa, that brings out the outlaw in me!” That started the story. I also live a few blocks from the train tracks and I hear them every night, I love it. The whistle blowing and the steel rolling is very soothing and hauntingly familiar, even without the whiskey, I feel like I am an Old Southern Soul.

Who have been the most influencial in your music and why…
My Mom and Dad both encouraged me to sing. I picked up the bass on my own, but the singing runs in the family and it was natural for me. When I turned 14 my Mom drove me to bass lessons every week. After high school I was accepted to attend Berklee College of Music in Boston, MA and they supported me, knowing how passionate I was about music.

My Mom raised me as a single mother and is my rock! She has always encouraged my creativity, worked 2 and 3 jobs so I could participate in things I wanted, such as Cheerleading and then music lessons. She always believed in me and told me when I was young that I could become whatever I wanted in life, with hard work and clean living. She is now 80 years young and is still my biggest fan and my greatest influence.

Describe your songwriting and production process…
The songwriting itself is always in progress. Ideas will come usually while I’m in conversation, either by me or someone else. It could just be one line that starts a whole story. I usually get a chorus first, something memorable and catchy. I get a lot of ideas while I’m walking, either on my treadmill or on a trail. If I can’t write it down, I’ll record a voice note on my phone, so I don’t forget.

Once I get a fairly strong and simple chorus I then start telling the story around that, using sensebound lyrics in the verses. I like to use Master Writer app to help with lyric/rhyme ideas. It really helped me in my lyric writing. The music is usually inspired by other songs I hear. Sometimes I’ll hear a drumbeat or a rhythm and will try it with the lyrics I’m working on, then find a key that works, and a simple chord pattern that works.

I am a bass player, and it’s not easy to write songs on bass, that’s actually the last part I create on a song. I was using a keyboard, but taught myself acoustic guitar over the past three years to help with songwriting, and I love it! I got myself a chord poster and spent many all nighters in my band room learning guitar chords and writing songs at the same time. I have always had an intense practice ethic, because I enjoy it!

After meeting Hank Linderman my producer/engineer/collaborator, I had even more motivation to write these songs. Hank has worked with some of the biggest artists in the business (Eagles, America, Chicago, etc) and I had to step it up. I was honored to be working with him and I really wanted to be the best I could be, and to be as ready as possible when I went into the studio in LA.Time is money!

In the studio I would start a song by singing what I had or even humming part of it and strumming my 6 string the best I could. We would decide on the tempo and put a basic drum machine beat in for reference. Hank would then start strumming along on his acoustic guitar and we would record a guitar track and a scratch vocal track. If I hear any harmonies in my head, I might throw those out on a track too. If I had a bass line idea, I would record a scratch track, but that usually came in the next session.

Hank is a genius at knowing what a song needs and is a multi-instrumentalist. After we ran out of ideas for that day, I’d take home a rough mix and work out my bass lines and my vocals at home. The next session, I would do bass in about three takes and then we’d re-do vocals and harmonies, and decide what other instruments the song needed and who was going play them.

I wanted this to be my own separate project from my cover band at the time, with Hank and whoever he suggested. Some of the parts were done via internet with ProTools.
John McFee(Doobie Brothers) did the Pedal Steel and Telecaster solo on Country Girl. I almost did a back flip when I heard the track! Hank suggested Drew Hester (Joe Walsh, Stevie Nicks, Foo Fighters-Percussion) for the drums on Country Girl, Home Sweet Home, and I Stayed. Drew came in, did a few takes, and nailed it!

The fiddle was done by Brian Arrowood (Travis Tritt) via Protools from Nashville. I met Ronnie Ciago in November 2016 and knew he was the perfect drummer for Old Southern Soul. He also sent the tracks from his studio. 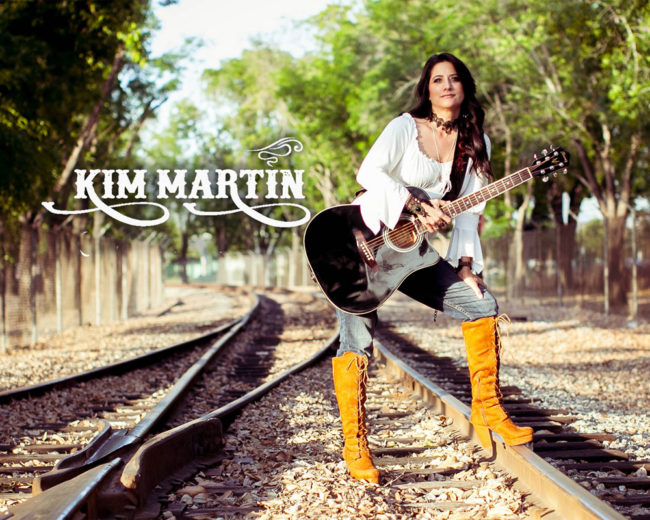 My favorite instrument is… my voice!

I used to consider myself a bass player first because I’ve spent so many years and so much time at it, but the vocals come from a deeper, personal place. An emotional vocal can touch people’s soul and stir all kinds of emotions.

I live in beautiful Southern California, The Inland Empire, about 50 miles East of Los Angeles. I spend most of my time playing live music, booking gigs, practicing and writing music, promoting music, social media, etc. My social life is intertwined with my band schedule. I love spending time at home with my family, my three cats, walking, and cooking dinner on my nights off.

What have you focused on this past month?
This month I have been focusing mainly on expanding my fan-base on social media with ads, email, joining more facebook groups and pages relating to country music and posting more performance videos. I have also been working on getting press releases out and keeping my website updated at http://www.kimmartinmusic.com

I am working on this because as an indie artist, it’s all about fan engagement and being pro-active in all aspects of your career. I have already released the EP and the music video for Old Southern Soul. Now I’m promoting and getting the music out there.

What are three things you’ve learned this past year…
1. Things happen at their own time, be patient and be ready for opportunity
2. Be yourself, work hard, and the right people will be attracted into your life
3. Make everything top quality, professional and don’t cut corners. You want to still like it five years from now.