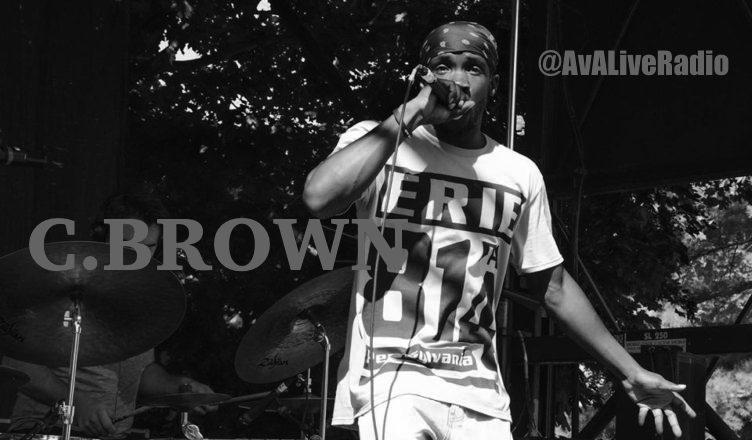 GETTING TO KNOW C. BROWN
by Jacqueline Jax host of A.V.A Live Radio

I grew up watching my Mom play as a Jazz artist. I loved to watch her be in the moment and just connect to the music. I strive to do that. I hope the music culture does embrace the intimacy of the music creation process. Artists need to focus on the music they want to create and forget about being distracted by the money.

It’s important to be brave. I created my song about my relationship with suicide so I could use my music to connect and also reach out. I’ve felt with depression and this song speaks about that. I try to use my feelings and experiences to write my music. Hopefully they will feel understood as well.

Music business..
I think the music business is weird. I get that it’s all about capitalism, but my issue is that they promote any kind of music which distorts the culture. How many times are you going to promote junk?! It seems like anyone can get signed nowadays. One of the problems that I’ve faced dealing with music business in general is the lack of professionalism and motivation. When it comes to shows, I’ve dealt with things being unorganized and unexplained. And most of the time, shows aren’t promoted the way that they should be. People telling me that they’ll help me with my career but never fall through has been a scenario. Too many promises are made that are never pursued. No one is really that serious about taking the next step.

To be positive, there is always an opportunity to perform in my city. You can pretty much go anywhere and throw a gig or just hop on the mic. There’s always a stage in Erie, P.A.

Inspiration…
My father. He died when I was 3. I never had that relationship with him like my siblings. I feel like I never met him. All I have is pictures and stories from the family. He took care of everyone and to me that’s the man that I strive to be. I have a friend who was upset with his father because he wasn’t there for him in his earlier years. I told him that he should reconnect with him because I don’t have that chance to speak to my dad, and at that time his dad wanted to see him. Appreciate one another people.

You can find “Dear Sue” on my project “The Feels” which is free for downloading and streaming at
http://www.datpiff.com/CBrown-the-Feels-Ep-mixtape.804939.html

Dear Sue…
is about my long-term relationship with the thought of suicide, and eventually overpowering the feeling which isn’t that easy at times. I’ve always wanted to create a song based on this because I know that others around the world have felt the same way as me. I was sketchy about recording “Dear Sue” thinking that people would look at me strangely due to the content. But it only felt right to release this record. I then decided to make it the first single from my EP (The Feels). This song has been in my heart for some time so I knew it was right to put it out there.

The Music…
The one thing that you can expect from my music in the future is that I’m going to give you what I feel. My music is like a journal for me. I’ll tell you about some of my darkest moments and may even poke fun at some. The music is meant to be entertaining as well as emotional. I use my music for therapy and to empathize with others. I write with no intentions of being the best or any of that garbage. I’m here to tell my story in hopes that you all nod your head to it.

I live in Erie, Pennsylvania…
The music scene here is phenomenal! There’s so much talent here. It’s stupid. Whatever you’re looking for, you can find in the 814. We have huge annual shows that put us in front of thousands to play for and I’ve had the pleasure of playing many of those gigs. Many of my fellow musicians are stagnant though. They’re caught up in the hamster wheel and never really go anywhere with their gifts. It’s disheartening. You have talent mixed with complacency. I just hope that someone decides to go after their dreams instead of just being a local name.
If you’re looking for a place to check out acts, I would recommend the King’s Rook and Sherlock’s. Those two venues throw shows on a regular. The Rook brings in out of town acts while having local musicians play as well on the same night. It gets crazy in there! As far as just having a good time, pretty much anywhere on State St (downtown Erie) can provide that. I enjoy Docksiders the most. It gets super packed but the energy is wild! I love the Plymouth Tavern too. They have great specials on food and drinks. It’s nice for down time.