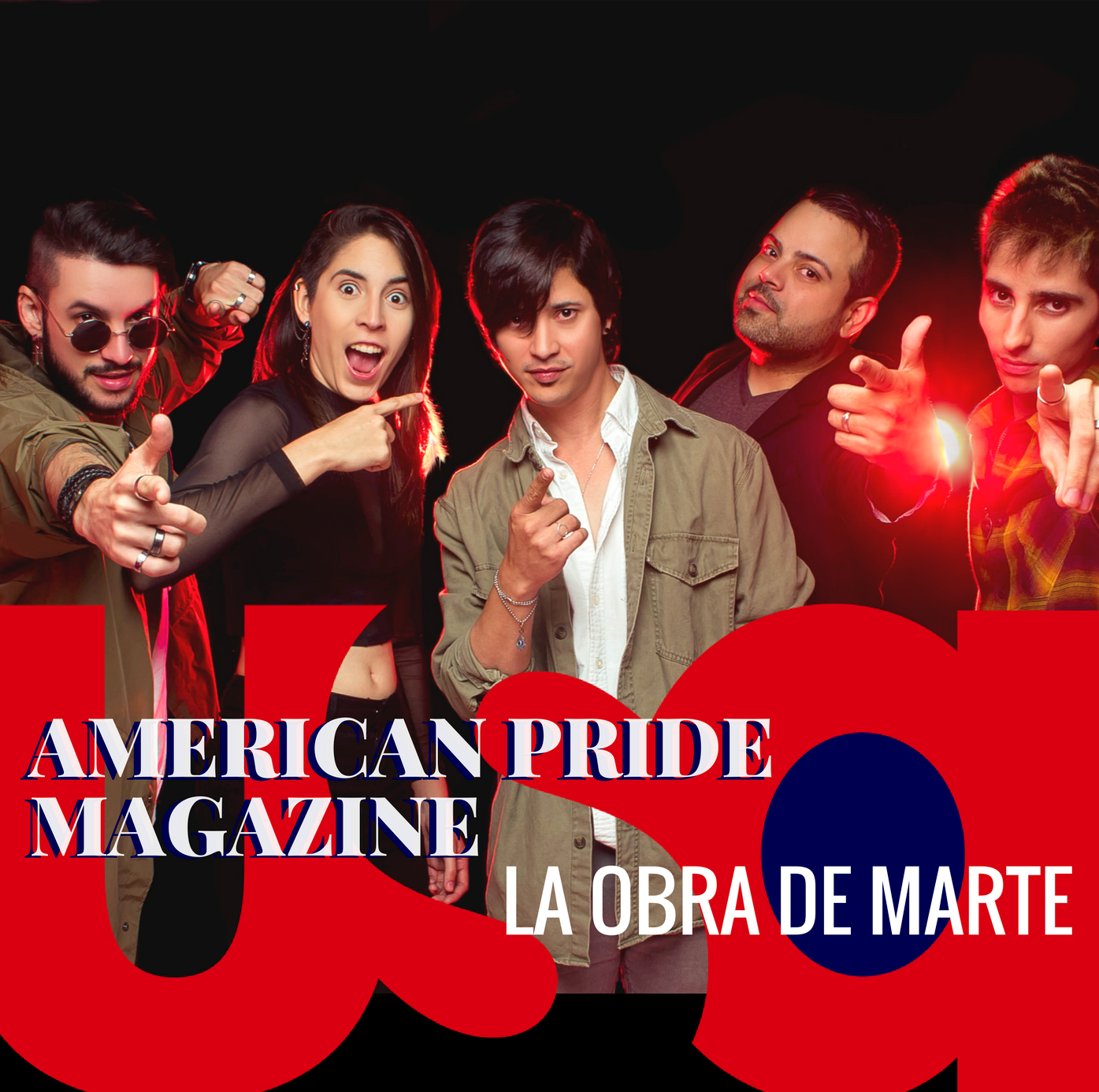 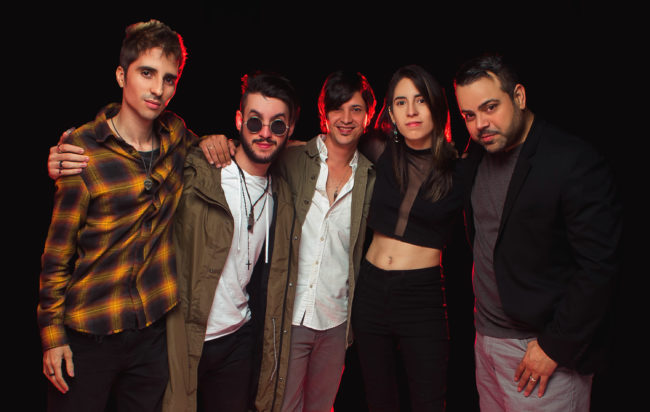 Now with the mix of our newer generation musicians they three have brought up a fresh vision with their own set of influences. Not only musical influences, but also their way of thinking and seeing life as a whole. You can’t imagine how these differences enrich us as an indie band, seeing our ideas in a wider spectrum from each of our members perspective, and then consolidating them as a whole.

La Obra De Marte  was founded in Puerto Rico by Jowy Berrios Lopez (Guitarist and music arranger at the time) and Emmanuel Rivera (Singer and lyricist). The band was founded in 2012. The band pretends to present allegories to the world of written literature, and art in general, and the reflection of those in our real life.

The name “La Obra De Marte” is a world play that is better understood in Spanish.

Besides this, Marte (Mars) represents a surreal plane, as we refer usually to Mars as a possibility to a future earth and new hope. Because of these symbolisms in our name we have applied all aspects to our lyrics.

The first recordings from La Obra De Marte came out as the demo titled “Soñadores Diurnos, Amantes Nocturnos”  (Daydreamers & Night Lovers), this was a self recorded demo having just the first 5 tracks composed by Emmanuel Rivera and Jowy Berrios. The demo created such a good impression in the local rock fan base that the next logical step was creating the band.

In 2015 La Obra De Marte released their first full length album, titled “Punto De Partida” (Starting Point) . Punto De Partida contains twelve full tracks. The album was recorded in Highway Studios (Arecibo Puerto Rico) by the recording engineer Alexis Pérez (also guitarist for the bands Kalavera Inc. Holy Crackers and session musician). During the recording of this album La Obra De Marte was formed by Jowy Berríos, Emmanuel Rivera, Xavier Izquierdo, Raffel Cruz, and Hernán Rios). This album was titled “Punto De Partida” as a declaration that this was our starting point for real, and that after this we were going to continue our band’s career indefinitely no matter what happened.

In 2017 La Obra De Marte have been through some line up changes, so they released the E.P. titled “La Cara” (“The Face” or “The Head”). This is just the first part of what was firstly intended to be a second full length album that was going to be titled “las Dos Caras De La Moneda (The Two Sides of The Medal Coin) making reference to the same Spanish saying which implies that every story has more than one side or perspective.

During the recording of this E.P. LODM consisted of Emmanuel Rivera Santiago, Jowy Berríos, and Ito Figueroa on Drums. They recorded the full E.P. in Highway Studios (Arecibo) with Alexis Pérez. After the recording sessions the drummer at the moment Ito Figueroa parted ways with the band in good terms. So the band reformed with three new band members: AJ Rivera (Drums), Pete Holliday (Guitar), and Hilmaris Sepúlveda (Bass), joined with the original members of the band Jowy Berrios and Emmanuel Rivera.

The band is at the moment in the pre-production process for the second part of Las Dos Caras De La Moneda, which is going to be titled “La Cruz” (“The tail” of a coin, or “the shield side of the coin”).

Song name: Ciclos (Cycles)
Music Genre:: Pop Punk/ Power Pop/ Indie Rock
During our existence as La Obra De Marte, we have experienced great successful peaks in our history, but also we have faced really bad times as well. During the release of our first Album called “Punto De Partida” everybody was digging the band and their music, a lot of support from the fans and friends we had a full line up and everything seemed to run smoothly and fall into place by itself. But this was not going to endure that much.

After a year of live playing and touring the band started to fall apart for different reasons, and at the end of it all the only ones left in the band were again Emmanuel Rivera and Jowy Berríos (the original founding members of the band). This was around 2016, so we were in a crossroad of stopping there and leave it all behind, or we could just regroup as a two piece again and continue composing and recording. We decided for the latter alternative.

We started composing again new ideas, and the process was very easy as we have been playing together for a while now. We did not have external influences in our composing methods, just our ideas and our drive to continue the band. So this is how exactly the song Ciclos came to life. Ciclos literally means cycles, so it is a never ending starting and ending points that will find each other once again and again in a cyclical form. So when we were almost dead as a band, we had a rebirth and came back to life with this song. Ciclos is the opening track of our E.P. titled “La Cara” (Aka “Las Dos Caras De La Moneda Parte 1).
Link to play:: Ciclos Music Video:
https://www.youtube.com/watch?v=n5Y3CD1YgOE
In our music I think that we have to many influences to be able to mention just one. Emmanuel and Jowy being the oldest pair of the band, our influences range from Early 90’s grunge, to modern alternative rock, and even metal (Even though our metal influences do not display in our musical sound, but it is still there. Now with the mix of our newer generation musicians (Pete Holliday, AJ Rivera and Hilmaris Sepúlveda), they three have brought up a fresh vision with their own set of influences. Not only musical influences, but also their way of thinking, and their way of seeing life as a whole. You can’t imagine how these differences enrich us as a band, seeing our ideas in a wider spectrum from each of our members perspective, and then consolidating them as a whole. 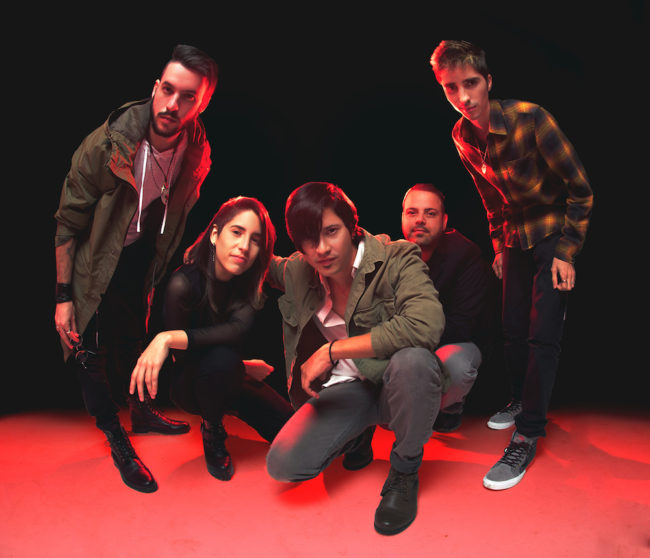 Usually our ideas are created by Emmanuel and I (Jowy Berrios). After all the years playing together there have been some sort of affinity between Emmanuel and I in terms of composing together. It just happens, without too much effort. I bring on a new riff, and he listens to it, and if he doesn’t have already a lyrical concept created, he will just listen to the whole vibe of the riff and work from there up to the types of lyrics that he would like to hear on top of that riff. Now in our future albums the composition process will change as we have our new member’s input in our music and I can see that it is going to change for the better.

We live in San Juan, Puerto Rico. We spend most of our time working our day jobs. Each of us has a “real” life that we need to continue besides our music plans. That is a reality that even though we would like to change, it is what feeds us, and what basically funds our musical projects.

“Every musician starts with the dream of making an impact to each one of all 7.2 billion humans in the planet; But as each of us musicians start growing up and maturing, we learn that even making an impact to just 1 person, makes it all worth it” -Jowy

This past month we have focused on getting our live sound tighter and better, but that is always an ongoing goal. Besides that we are also composing and preparing the “La Cruz” E.P. (AKA Las Dos Caras De La Moneda Parte 2), so that we can enter the studio and start recording it during early summer 2018. We are also polishing our image and working towards a more professional and established indie acts in Latin America.

As a band we learned a lot this last year. But if we are going to narrow it down to three it would have to be these three:
1) It doesn’t matter how much  you plan as a band, or how much you calculate and expect things to work, there will always be something that throws the plan off. So it is crucial that as individuals and as a band we learn to shift mindsets fast and adapt to overcome obstacles.

2) People like to root for the underdog.  If they saw you struggling all the way up and you were able to make it, they will back you up as they know what price you paid to “make it”.

3) Hurricanes suck. Having to go through the process of being hit by Hurricane Maria in Puerto Rico was a set back for every sector in our island. However, it was a really deep learning experience knowing how you and your people will react in a situation like that.