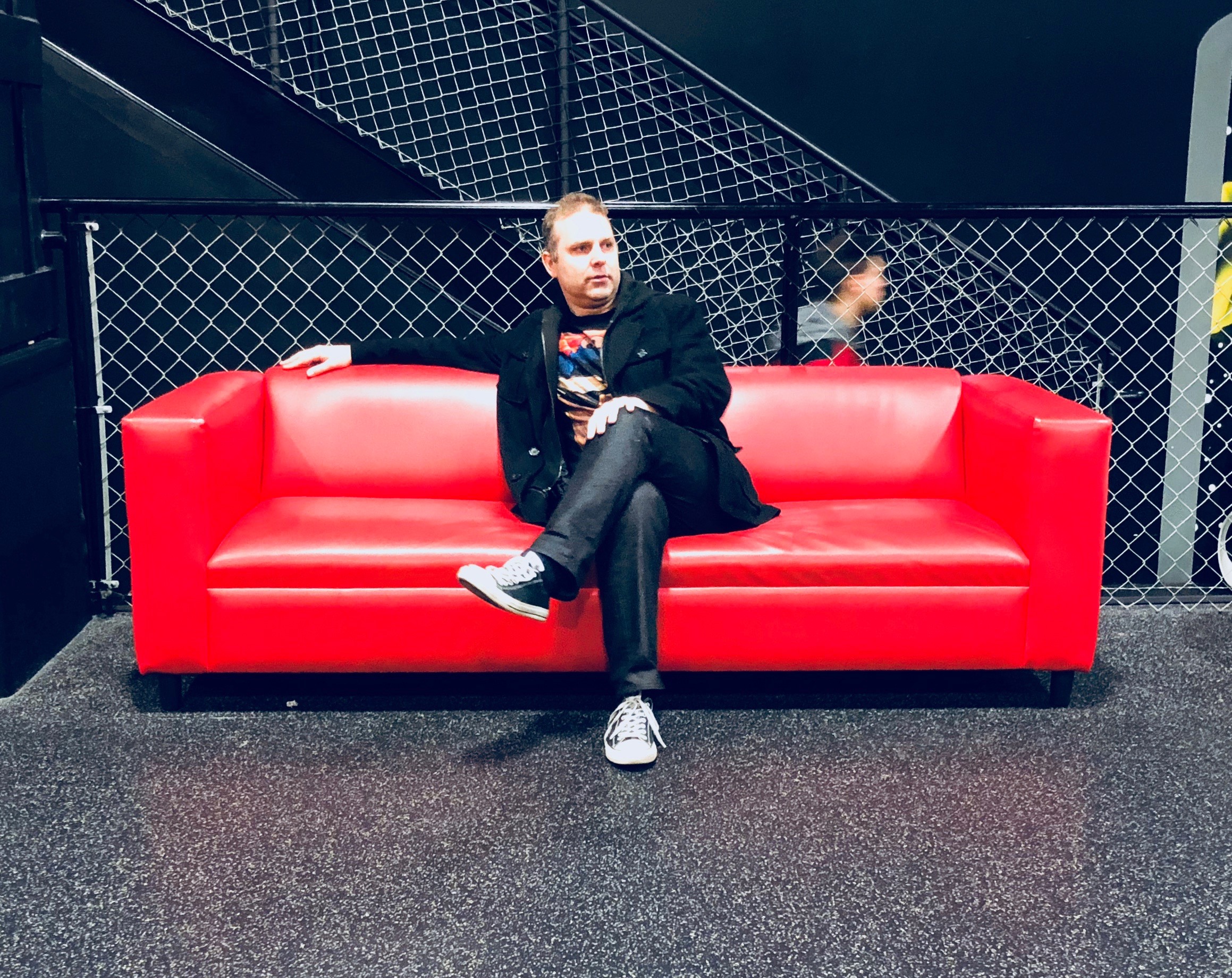 I am an alternative pop/rock musician based out of Nashville, TN. My piano-driven pop songwriting is infused with 80’s/90’s nostalgia, weaving in and out of genres.

I fell in love with music as a teenager. ..
It was an outlet for me, a way to express myself and connect with others. I started on piano and quickly transitioned to the guitar. Years later, I started writing, producing and releasing my music in 2013 from my home studio.

In March of 2015, my daughter who was two at the time was diagnosed with Acute Lymphoblastic Leukemia…
That is a life-threatening type of cancer. It required two and a half years of intense chemotherapy and treatment. The medicine made her sick, she spent weeks in the hospital, she got blood transfusions, spinal taps, pricked, poked, and prodded. Her hair fell out, leaving her exposed. But through it all, she kept smiling, kept putting one foot in front of the other. And then one day, the treatment ended. No more chemo. The cancer was destroyed. Her hair grew back. I’m happy to report that she has been cancer-free for a year and a half with a positive long-term prognosis!

It was during this time that my professional career brought me to the Nashville, TN area. I work in the hospice industry as a data analyst, helping thousands with critical illness find some comfort at end of life. I’m confronted with the brevity of life daily.

Music is my way of dealing with these heavy experiences. Life is so short and we are all so precious. God has a specific purpose for us all, something he’s made us do.

In Nashville..
I’ve been able to connect with an entire community of like-minded musicians. I’ve had the privilege of working with top-notch producers. It’s helped me push my craft to new levels as well as encourage others to continue creating and pursuing their passion.

In early 2016, my family and I moved to the Nashville, TN area for an opportunity in my professional career. I saw this as a chance to push my musical “hobby” to another level. I felt like I’d taken my musical craft as far as I could on my own.

I started looking for co-writers and producers. In 2017, I hired a producer and did a co-write with the amazing Andy Walker (check out his killer 80’s influenced synth-based pop songs from his solo project “The Alphabet Zero”). We released “If Just For One Night” that year. Working with a producer, I quickly realized the value of having a team effort to create music. There are hundreds of small decisions that have to be made and it’s nice to have someone else to bounce ideas off of.

My latest release, “Afterglow” was produced by industry veteran Jason Germain of the group “Down Here.” It took us the span of an entire year to create “Afterglow.” Both of us have other day jobs and we wanted to take as much time as needed to put on tape what we heard in our heads without compromising on quality.

Jason understood the story I was trying to tell and approached the project with a sense of fun and passion. Having a producer to guide and shape every aspect of a song has been a game-changer for me. For example, the demo of my latest release “Afterglow” is very different from the final song. The initial round of feedback Jason gave me was to increase the tempo, take the key up from E to G to push my vocal to a more evocative key, and sing verse one an octave lower to allow the melodic lift in the first chorus to be more dramatic. We also changed the song from an 80’s synth-driven feel to a 90’s rock guitar-driven sound. Having an outstanding producer helped me realize a vision that I couldn’t have achieved on my own.

This song is about the longing to return home while searching for a fulfillment found in the responsibilities of life. I feel like I’m at a place where I’m searching for purpose, for meaning, for something tangible to accomplish with my life. Sometimes it feels like I’m just drifting along.

As a person of faith, I believe we are all here for a reason. Yet sometimes life can be such a struggle and feel meaningless. I have to reconcile that struggle between my emotions and my faith. Because life is special, impossibly rare and full of meaning just waiting to be discovered. We go through things that don’t make any sense, things that hurt deeply. We spiral out of control. But then, the tide changes and we end up at a better place in the end than when we started. And we, every one of us, have an enormous responsibility in life just waiting to be realized.

All of these thoughts were bubbling beneath the surface one night as I was watching a documentary about the Voyager space probe. Now I know, this may not be a cool rock ‘n roll thing to admit, but I like this sort of stuff.

“Afterglow” was inspired by the Voyager space probe, the golden record it carries containing a time capsule of information about all of us, and a picture it took of Earth from over 4 billion miles away. Written in the first person from the perspective of Voyager (a satellite of sorts), it’s an abstract metaphor grounded in very real human experience. This song is heavily influenced by the sounds from the 90’s.

There are two conflicting emotions battling for resolution throughout the song. This is reflected in the song instrumentation and structure. It combines driving rock guitars with symphonic instrumentation to effortlessly weave together genres into something both nostalgic and new. Musically, it brings to mind guitar-driven songs from the likes of Collective Soul, Linkin Park, Train, Weezer, and Tom Petty.

I spend most of my time in Nashville, TN working mostly and spending evenings and weekends with my family, or with my church. I also play too much Fortnite with my kids.

Michael W. Smith’s has been the most influential in my music because his music connected with me at a very young age. I connected with the lyrics in his songs and love his complex pop arrangements. I love 80’s and 90’s music. Phil Collins, U2, Tom Petty, Heart, and all the Seattle alternative rock bands. I have a special place in my heart for the Beach Boys. They had a way of marrying lyrics and melody in a way that has never been matched. I’ve also been heavily influenced by the modern worship scene, Hillsong United, Delirious, Passion, Elevation Worship, Bethel Music, etc.. I’ve been playing in worship groups for years and years. I love helping connect others with the love of Christ through music.

When did you know that this was the right path for you?
In 1994, I was at a Christian music festival called Creation East. I didn’t play an instrument yet but felt like it was my destiny. Coincidently, many years later, I stood on that very stage with a microphone. I was not there as an artist but as a representative of a major university speaking to prospective students about the value of higher education. So I guess that sort of counts towards the bucket list? Maybe like 50%?

What do you like most about what you do?
When I’m playing a live set and hear the audience singing. I look out and see that everyone is participating and connecting to the song. It’s in those very special moments where the band and audience are no longer two separate entities but rather one unified whole. There is no other experience like it.

What do you most hope to accomplish with your influence?
To help others come to know the love and forgiveness of Jesus Christ. It’s through His death, burial, and resurrection that those who believe in him. By faith can have the gift of eternal life.

What is the biggest obstacle you have faced in your career, and how did you overcome it?
Complacency. It’s easy to dream but far more difficult to take action. When I was in my early thirties, my father-in-law passed away far too soon. It was a wake-up call for me. We aren’t guaranteed tomorrow. I realized that the only way anyone would ever hear my music was to get busy making it. That’s when I started writing and releasing music in earnest, no more excuses.

What are you most looking forward to this next month?
My new single “Afterglow” has been over a year in the making. I’m super pumped about this launch and that others can finally hear it.