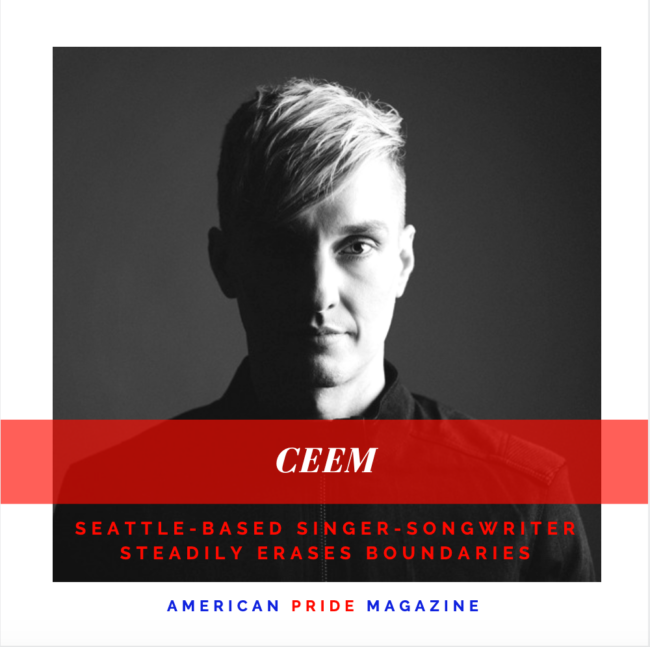 CEEM is a Seattle-based singer-songwriter and producer who steadily erases boundaries to encourage inclusion through his immersive electro-pop musicality. With a genre he dubs as ‘Emotronic,’ the artist blends electronic music with emo, merging 80s glitzy synth-pop with the transformative broodiness of emo music, strung together with lyrics covering themes of rebellion, inclusiveness of the marginalized, heartbreak, and acceptance.

The fire in CEEM was ignited from a young age when he realized music was the one thing he wanted to pursue. He first studied classical piano, and would later complete a degree in audio engineering. To CEEM, music is a part of his DNA; it’s the one thing that sets his soul alight, and he is compelled to share it with the rest of the world. He released his debut album Creative Ways to Self Destruct in 2005, inspired by the indie dance movement of the early 00’s, which echoed bands such as The Postal Service and Metric. His first EP Equilibrium was released in 2012, taking a turn into synth-pop and other 80s-inspired soundscapes, and a few years later, released the single “The Instigator” which pulls from his lifelong influences such as David Bowie, Madonna, and Eurythmics.

After a brief hiatus, CEEM has further matured his sound, diving deeper into the reasons as to why he creates music. “As the world becomes more divided,” states the artist, “we need music and art to bring us together.” CEEM wants to be inclusive of those feeling marginalized by the events in the world, as he has witnessed and been a part of it first hand. “The future is where love needs to reign, we owe it to one another to protect one another.” Not shying away from the fight and with more love to give than ever before, CEEM will be releasing his next album Cruel World in the Fall of 2019.

This song is about…

Remedy is a sequel to another song I wrote, Unbreakable. I wrote Unbreakable in response to living through the 2016 terrorist attack in Nice France on Bastille day. I’m not trying to market any sort of tragedy, so let’s get that out of the way real quick, I wrote Unbreakable because I came back from that trip feeling shattered and confused, and writing Unbreakable helped put me back together. I sat down and wrote Unbreakable feeling angry and frustrated that this broken human had irrevocably changed my life, however, having come to that realization that I would never give in to fear I began to realize that the situation had created something new in me. I understood that this was now something that was woven into my DNA and it somehow made me stronger, I found the strength that I didn’t know that I had. Instead of cowing down to fear, I began facing my fears head-on, looking them dead in the face and metaphorically saying “what the fuck you gonna do about it”.

When I was writing Unbreakable, I didn’t want to shy away from exactly what it’s about, running away from gunfire and mayhem, I felt it was important to capture and incorporate those types of sounds in the song, so that’s why you hear heavy breathing and gunshots. The song as taken many forms since its original form and the final version feels even more relevant now because there have been so many mass shootings and gun control is still a volatile topic with so many people, which is why I’ll save opening on that topic for another time. As cathartic and healing as writing Unbreakable was, I still felt that I needed to face my ultimate fear and go back to the scene of the crime.

I went back to Nice July 2019 for Bastille day, alone this time, and retraced the steps and the horror that took place. I wanted to go back and finish writing Cruel World, but for the first four days I was there, the words wouldn’t come, there was some sort of glitch in my brain. I would put pen to paper and write but nothing felt authentic or genuine until I made it through Bastille day. There was some unconscious malfunction in the brain that wasn’t letting me write until I fully lived through that day, in that place again, and the following day Remedy just started pouring out of me. I had to go back to the origin of trauma, find all of the broken pieces and put them back together and in the process, I wasn’t finding closure, because things like this you don’t get closure from, they become a part of you. I found a Remedy to my healing and that’s how the song came about.

A friend met me in Nice, and I walked him through the places and the events of that night, and I found as I did this, talking about it, shedding light on this “thing” the weight and gravity of the situation began to lose its grip. I started formulating and arranging Remedy in Nice, and while I was on the train to Paris, I kept working on it and by the time I pulled into Gare de Lyon Remedy was in the world. I took what I had back to Seattle to finish recording it, and how the song ends, just repeating “I found the Remedy” is a declarative chant, and I want people to know that if I can find the Remedy I needed, that they’re not alone and can find the Remedy they need to continue to heal and find strength they never knew they had.

I live in… Seattle Washington

Who has been the most influential in your music and why?  I have so many musical inspirations, but the artists that have resonated with me throughout my life, are David Bowie and Madonna. They both taught me the power of creativity and being fearless. The death of David Bowie is actually what inspired Cruel World. Other inspiring artists that I look up to are Lady Gaga, again for the power of being fearless and owning who you are. Another awesome band I’ve loved for years is Siouxie and the Banshees. When I first heard Peekaboo I couldn’t make sense of it and I became obsessed!

When did you know that this was the right path for you? : Birth.

What do you like most about what you do? : The creative process. It’s so frustrating but when you get to where you want to be, there’s no better feeling.

What do you most hope to accomplish with your influence?: To rattle society’s cage, break down the status quo and spread a spirit of inclusivity. More love in the world!! We need now more than ever.

What is the biggest obstacle you have faced in your career, and how did you overcome it?: Doubt and fear. Those aren’t things that I’ve overcome, but I’ve learned to manage them in a way that doesn’t get and keep me down. It’s like a voice in your head that you acknowledge and then say F*** You, I’m not listening to that B.S.

What do you want people to remember most about you and your career?: What I want people to remember most about my career, are things that haven’t happened yet, this is just the beginning! But if I had to pick something, it would have to be authenticity and fearlessness. Being true to yourself, especially in the face of opposition is so important to me and not backing down from what you believe even if it’s the unpopular point of view at the time. My integrity is something that no one can ever take away from me.