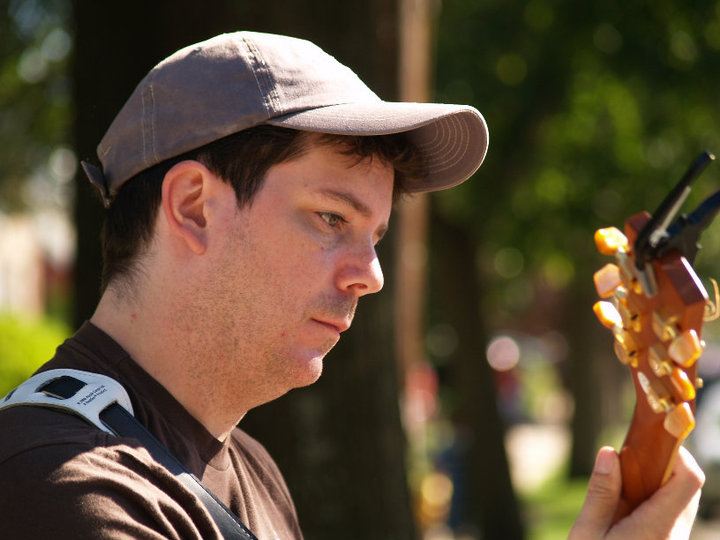 “Music Trends.. What’s that old saying? Fashion is today, style is forever… Chasing a trend means that you’re already swimming in someone else’s wake so why do that? The great artists had a sense of identity that is indelibly linked to their music.”  Kenny Dunckley @foundlingsband

Listen to the show:  http://www.blogtalkradio.com/avaliveradio/2015/09/10/episode-256-ava-live-radio-behind-the-music-with-jacqueline-jax

GETTING TO KNOW THE FOUNDLINGS
by Jacqueline Jax host of A.V.A Live Radio

High Expectations…
My grandpa and my dad were both piano players so I picked that up when I was about 6. When John Lennon died, the radio did nothing but play Beatle music for months afterward so I was ruined forever by expecting that all bands had to write entire albums of great songs. I heard Van Halen as a teenager and that was it. I had tried to play guitar on a beat up old Carlo Robelli that my uncle gave me but I didn’t realize that I needed to play left-handed. So when I was 18 I got a lefty Kramer Baretta for Xmas and I’ve been playing ever since. It turned out to be a good thing because good left-handed guitars are hard to come by so instead of having 50, I only have 13. So far.

Sometimes (In My Dreams)
I wrote this particular song when I was 19 about relationship troubles I was having with my girlfriend at the time. It was written after we had a fight brought about by jealousy. Who knew that guitars somehow attracted other women? The song has lasted longer than the relationship, luckily for me! (Free download with signup on the site: http://thefoundlings.bandzoogle.com/home )

The tracks currently on the band’s Soundcloud account are really glorified demos. The benefit of digital technology and the Internet nowadays is that anyone can make a very good recording of a song and have people access it immediately. There’s still no substitute for a professionally mastered track, however, so we’ll be going into the studio to give the songs meant for the first album a real polish and then release them through the website and eventually the established platforms like iTunes.

Long Island NY…
I’m on Long Island which is a schizophrenic music scene. We have multiple venues that cater to all levels from local bar bands to national touring acts but locally the successful bands (meaning “lucrative”) are cover bands and tribute bands. Some local coffeehouses, bars and clubs will book artists playing original music but they’re the exception not the rule. For most artists who want to play their own tunes, it’s usually more practical to get gigs in Manhattan or the other boroughs of NYC. A fun thing that I do is play in an acoustic duo with my uncle, doing covers of classic rock songs, usually at happy hours in local bars.

The Music Industry…
I started playing in bands in the early 90s and in college I was vice president of our concert committee so I’ve seen the industry mutate over the years. I remember griping about seeing a Britney Spears CD being sold at Tower Records in 1998 for $25 because the labels knew someone would pay that much for it to Napster destroying the entire hard copy industry and the record labels scrambling to adapt which they still haven’t managed to do. Ultimately, you have to remember that this is a business first and as loath as many artists are to developing business sense, it’s never been more important to have than now because the money isn’t there the way it used to be. I view myself as the CEO of my brand and my product, so everything that goes out with The Foundlings name on it has to get my approval and it sinks or swims on my involvement. The key is to be aware of everything-copyright your songs online, get a reliable attorney to file your band’s name and logo as a trademark, go to your county clerk’s office and get a DBA so that you can start your own publishing company and negotiate with organizations like ASCAP or BMI. The more you learn about these aspects of the music business, the better protected you are and people will take you more seriously in their dealings with you.

Social media…
Have you found any challenges that you’ve had to overcome? Social media is great but again, it’s a double edged sword. It’s an amazing feeling to log in to your Soundcloud account and find that a hip-hop rapper from Kenya re-posted your tune or a folk singer in Canada liked your acoustic ballad or a bass player in Scotland compares one of your tunes to his favorite artist, whom you’ve never heard of so, of course, now you have to check that artist out. The downside is that if everyone is online and trying to be heard, there’s only so many hours in so many days that anyone can dedicate to finding new music, so figuring out how to stand out and attract the maximum number of fans becomes extremely difficult.

Music Marketing…
I’m an album guy. I grew up with vinyl and CDs and AOR on FM radio so I still believe that an album shouldn’t just be a bunch of songs thrown together. It should make for a comprehensive listening experience for the consumer. That said, we’ve pretty much returned to the business model of the 50s where the single-the individual song-is now the currency among the consumer. Most people who hear a song that they like will track it down and download it without ever listening to the other tracks available from the artist. So marketing now means exposing your music as much as possible in every format and media outlet possible. For example, I’m in negotiations with an independent filmmaker named Dan Marquadt who has won numerous awards for his documentary on Long Island. He’s currently filming a sequel and heard one of my songs on SoundCloud and wants to include it as incidental background music in the film.

The Beatles were marketing geniuses. The moptop hairdo, the Pierre Cardin collarless suits, the Cuban-heeled boots-none of this had anything to do with the music but it provided a stirring visual. Metallica were the same way but in reverse-here are four ugly, hairy dudes who look like most of their audience. It’s all an image but in these cases they worked because it was an extension of those bands’ collective personalities. Social media can help put your name and face out there now, but you only have a nanosecond to grab people before the next web click. You still have to play gigs, maintain web pages of all kinds, find outlets for your music that you hadn’t considered before, define your image. Not much has really changed since Elvis.

I would love to have 5 minutes alone with…
Paul McCartney and not just because he’s one of the great songwriters and musicians of the 20th Century, which he is, but because he’s navigated all of the cultural, political, economic, and social upheaval of the past 50 years without being in rehab, raised kids who aren’t akin to Lindsey Lohan, made music that stands the test of time and still tours the world at 73. He’s lost the love of his life, his best friend from boyhood was murdered, his other mate dies of cancer and he still finds the right path even when the media is ripping him for it. This is a guy who’s figured it all out and I want to know how he did it.

Music Trends..
What’s that old saying? “Fashion is today, style is forever…” Chasing a trend means that you’re already swimming in someone else’s wake so why do that? The great artists had a sense of identity that is indelibly linked to their music. Van Halen debuted in 1978 at the height of the disco era. U2 sang about activism and spirituality during the coked-up materialistic Reagan era. If you’re working on something that really thrills your soul, go with it. Maybe it becomes the next big thing and changes the whole world, or maybe you become like Nick Drake and it’s thirty years after your tragic death that people pay attention, but you have to listen to the Muse. At the same time, it doesn’t hurt to keep your ears open to what other people are doing. Brian Wilson heard the Beatles’ Rubber Soul which prompted him to make Pet Sounds which influenced the Beatles to produce Sgt. Pepper which influenced Jimi Hendrix so if you want to make a thrash-reggae hybrid of classical music themes, go for it!

Creating My Music..
I’m pathetically old school by today’s standards. My recordings are made on a ten year old Tascam 8-track with a built in CD burner using a direct box, an old Alesis drum machine, and some digital effects processors of various brands. The two pieces of equipment that I recommend that you don’t skimp on when recording are microphones and a preamp for vocals. The difference is startling. The benefit of doing it this way are that the WAV files can be exported to external hard drives and uploaded into DAW and desktop software like ProTools where they can be manipulated in a proper studio which is the plan for the upcoming album.

I continue to challenge myself…
I read an interview years ago with the late, great bluesman Albert King who joked about knowing only 3 songs for his first gig so he played them all in three different speeds: slow, midtempo, and fast and nobody in the audience noticed. I’ve found that a useful tool for assessing your compositions is to play them in different arrangements and even different genres. If you can play the same song like Garth Brooks, Bob Marley, and Black Sabbath, you’re probably on to something.

I am most afraid of..
Failure. Not in a commercial sense but in an artistic sense. There’s always a nagging fear in a composer’s mind that some day the Muse will stop showing up and then you’re entire sense of self comes into question. This leads to self-doubt which leads to second-guessing yourself and ignoring your real instincts and that’s the road to perdition right there!

Success…
For people to still be listening to my music a hundred years after I die. If someone guaranteed that my songs would one day be studied and performed with the same diligence that is afforded to Gershwin, Joplin, Cohan, et. al. I could die contented. Barring that, it wouldn’t hurt to sell 10 million copies of an album! I could live with that too.