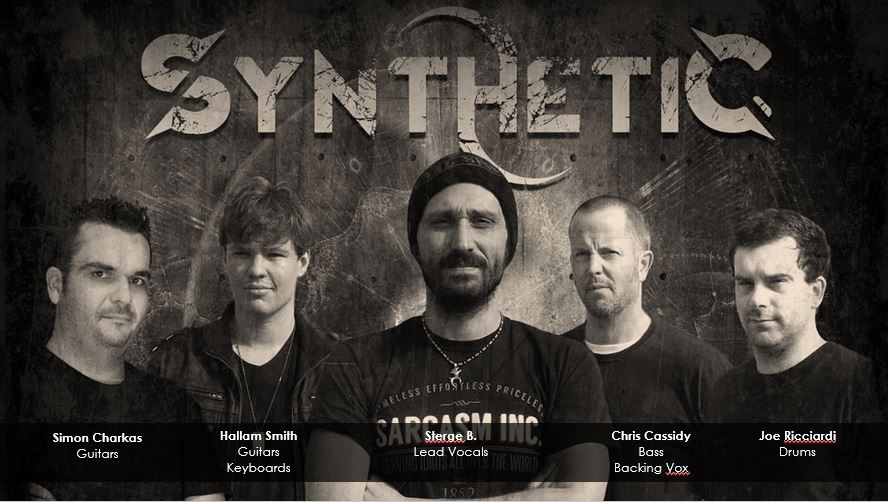 Well, it’s business as you pointed out…
It’s an industry and as every other industry it cares for profit, and profit comes from squeezing as much as you can out of labor without giving much back. It has been painful to watch the music industry evolving into the monster it is today. Maybe subconsciously this is what’s stopping us from pursuing a deal with a record label so far. We feel it’s a waste of time, it’s not going to go anywhere, and if it did it would probably be under inhuman terms and conditions. So here is our open invitation to the music industry to prove us wrong. @syntheticmetal

GETTING TO KNOW SYNTHETIC
by Jacqueline Jax host of A.V.A Live Radio

Well, it’s business as you pointed out…
It’s an industry and as every other industry it cares for profit, and profit comes from squeezing as much as you can out of labor without giving much back. It has been painful to watch the music industry evolving into the monster it is today. Maybe subconsciously this is what’s stopping us from pursuing a deal with a record label so far. We feel it’s a waste of time, it’s not going to go anywhere, and if it did it would probably be under inhuman terms and conditions. So here is our open invitation to the music industry to prove us wrong.

Well, being healthy and capable of making and launching…
your own music is by itself a bliss. Also getting the fans’ and media’s attention and receiving positive feedback, comments and reviews builds on our confidence and makes it all worth it. There are always difficulties when you don’t have corporate endorsement. For instance, the entire album making process takes longer as you have to work full-time to raise the funds that go into the production. Sometimes people get frustrated and tired and they give up. We won’t let any hurdles affect us. Instead we will capitalize on our independence to deliver an honest and authentic product to the audience and we remain hopeful that today’s rock and metal community will appreciate that and offer back their support.

Singles lend themselves nicely to popular music…
which by its nature is aimed at mass consumption and mainly consists of songs with very short life span. Rock and metal artists and fans look into their music through a deeper, more penetrative lens. They live beyond the ephemeral and they value complete experiences and not just snapshots of what could potentially be a positive experience. Therefore, we as rock artists, need to provide the audience with something weighty and substantial and the audience on their end expect that to be the case.

Social media are the only viable and freely available marketing…
tool for unsigned artists. The value they bring is priceless. That’s how we met you after all and the benefits are tangible. One of the advantages of social media is the direct and immediate contact you can have with your audience and the ability to transcend all geographical boundaries. There is nothing more fulfilling and honest than speaking directly with your fans.

Although impossible, I would personally still love to have 5 minutes alone with Ronnie…
I must figure out what type of metal his vocal chords were made of. Despite my love and respect for many singers out there, I still rank Ronnie higher, he had a unique and divine vocal texture and an unreal range, just beyond human. For such a small person, he had the biggest voice and personality in the entire history of rock music.

There is indeed too much emphasis on being current and trendy…
two adjectives that do not resonate with us strongly. Current implies no past and no future and we as a band and as individuals have both an identity and a destination. Trendy implies fashionable and rock music was never intended to be that. We appreciate modernity when it’s delivered through authenticity. We love contemporary when it’s expressed through provenance. That’s our balance.

One of the magazines which recently reviewed our album used the following Mohamed Ali quote to describe our sound: “float like a butterfly and sting like a bee” – this has to be our favorite quote from now on!

We hold Iron Maiden accountable for making us all to want to grab a guitar and a microphone.

Memories
The lead character of the story is a humble
yet ambitious individual who feels trapped and asphyxiated within his/her own reality. He/she develops the illusion that he/she can find solace within the already fragile reality of another person with whom he/she shares a strong emotional bond. The circumstances are such that don’t allow the wounded souls of our two main characters to become one and in the end it all turns into a distant bittersweet memory.Interestingly, the song was first written back in the year 2000!

It was never recorded professionally…
We have of course evolved musically since, so to meet the requirements of this album we gave Memories a good ‘facelift’ and transformed it into the 2016 equivalent. The only original piece we left untouched is the opening theme, so the first few seconds really.

Our music is fully charged with emotion and packed with passion and energy…
qualities which, as we are being told, come to life when listening to the album. This album is an important milestone for us, not only because it’s a debut, but it is also a canvas brushed with all the feelings and thoughts we carried inside for over a decade now. The fragile fabric of our reality, the overbearing sense of fear and insecurity, the unsustainable pain of losing someone you loved, the aggravating mechanisms of global politics, media and technology, the absolute disintegration of the very human nature and people’s oblivious and apathetic response to all of the aforementioned are our inner truths that needed to be heard. The title of the album encapsulates all that in four words. It is in reality a word game. It’s an attack to any kind of establishment that manipulates and hides the truth from all innocent residents of this planet. We feel an obligation to touch on those subjects, to help us release the negative energy and to awaken others. We know there’s still so much beauty around and life can be incredible, let’s not let anyone take it from us.

We live in Cambridge…
one of the most historic towns in the UK and home of the legendary Pink Floyd. The music scene is relatively strong but often overruled by science, academia and other performing arts. The rock and metal community is tiny in comparison to that of London’s, but no worries, we are only a few miles afar. Right now, the only thing in our heads that screams ‘fun’ is getting on stage and giving 1000% of our energy to the fans.