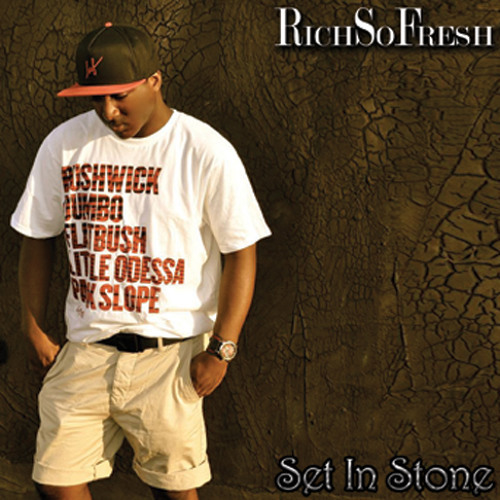 “I feel like a lot of musicians try to emulate whats “hot” because its receiving a ton of attention but that doesn’t make your music stand out if you’re trying to replicate whats already being done.” @RichSoFresh

Listen to the show: http://www.blogtalkradio.com/avaliveradio/2015/10/22/episode-267-ava-live-radio-behind-the-music-with-jacqueline-jax

GETTING TO KNOW RICH SO FRESH
by Jacqueline Jax host of A.V.A Live Radio

I am Inspired by..
JayZ, LilWayne

Being Kool… influenced by friends. Its a serious subject matter so I was serious. I accept songs that have a great message. (especially ones that uplift others) I’m not perfect, I go through emotions like everyone else, but I’m still trying to get it together.

Brooklyn…
music scene is very active. My hobby is shopping.

I feel like the music business is..
“so-so” because theirs people who don’t want you to know the deeper details to the industry so they are willing to cut corners sort of speak at least from what I’ve heard. I’m doing my best with online networking ; to build my fan base.

The Pros : the people who want to see you actually succeed.

The Cons: having to be careful with whom you do business with ; not everyone is
trustworthy.

Overcoming hurtles.. Doing my best to be patient and persistent.

Social Media is very active…
its easier to use the internet to blow up ; back in the day it was extremely difficult and involved a longer process.

Challenge is… deciding who’s really sincere in what they (people) have to “offer” you.

Singles vs Albums…
I feel its great to release a full body of work because you get a great experience out of listening to a full CD when its all together rather just hearing a few singles and not knowing the inspiration behind the songs (singles)
I dropped an EP : and I’m treating it as an album by having singles I want to promote one at a time with visuals rather then just releasing a bunch of videos and promoting each one of them. It would take more work pushing more then one video at once.

I wish I could have 5 minutes along with…
Kendrick Lamar because he seems socially aware in his music and I love to see that in a musician. He’s great at painting a vivid image in his music.

Music Trends…
I feel like a lot of musicians try to emulate whats “hot” because its receiving a ton of attention but that doesn’t make your music stand out if you’re trying to replicate whats already being done. I’ve learned to be myself in my music ; no one is fully going to understand why I come out with some songs. There are reasons why I put out
certain songs ; I feel people need to hear different sides of me as an artist. People are either going to love your music, hate it or think its just alright but as long as its coming from my heart than I know I put my best foot forward.

I most fear…
Forgetting my lyrics on stage

The best day…
Getting
featured on a blog site for the first time. I totally wasn’t expecting it. One day I was researching myself on Google and I ended up stumbling upon the blog and I honestly though it was FAKE, I thought that one of my friends where trying to be extra nice and write some positive stuff about my music , but it was legit cause their were other artists on the site /blog as well. Its crazy how you never know who’s watching you, in a sense that someone could be feeling your material and want to write about it. I think its an amazing and humbling experience. It made me feel as though my music is making impact little by little.

I challenge myself ..
1) To trying to make the best music I can (I want others to be impacted by it)
2) Deciding who to work with (like i said previously, you never know who’s really trustworthy)
3) (Challenging to think of visuals for artworks (and videos); I want everything I do musically to be as professional and amazing as
possible.