33-year sober, serial entrepreneur, off and on millionaire, Dad of 4, Grandpa of 4 more and all around defiant Renaissance Man; visionary singer-songwriter Chuck Whyard (aka “C Wired”) hit critical pay dirt out of the box earlier in 2018 with Omega, the explosive, eclectic and uber-literate debut EP.

C’s music reflects a life that’s a proverbial magic carpet ride. It began on the outskirts of Detroit, includes years in NY, DC and is now making waves haunting the quaint hamlet of Berkeley Springs, WV. C Wired lives with no boundaries, following his personal credo that “my only rules are do no harm and stay out of jail. Everything else is fair game. It’s all right there in his sound bite filled mission statement: “Self-introspection. Spiritual Evolution. Sexual Expansion. Freedom from guilt and fear. Joy in Being. No boundaries. No limitations. No judgment.

Angel Circuit Engaged was one of the first songs I wrote. It’s a call to all to engage our Higher Selves our Angelic Circuitry. It’s very much needed now as we find ourselves challenged by lower energy forces that are in control of and are making our planet uninhabitable. We can change our world together by holding a shared vision of Peace and Abundance for ALL.

“Warm feedback slithers through our speakers and takes hold of our attention as we enter the title track of Cwiredband’s new record Angel Circuit Engaged, their follow up to their much-buzzed Omega EP also released last year. Before long, that feedback is harnessed and transformed into a scorcher of a melody produced by a feverish lead guitar and punctuated with the pummeling of a massive drum kit” – Don McCloskey – Gas House Radio 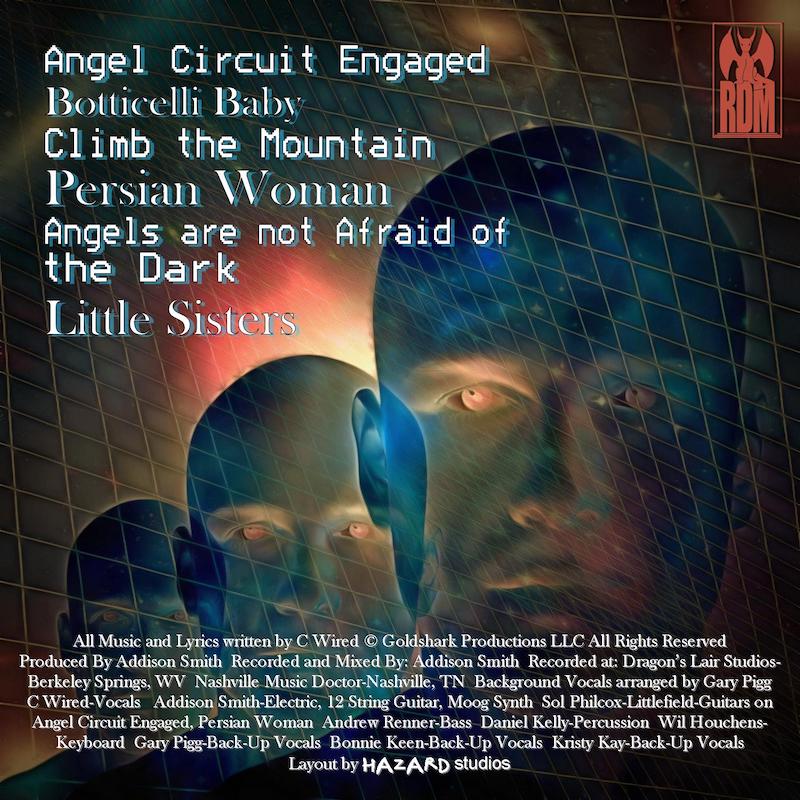 Who have been the most influential in your music?
Dire Straits – Mark Knopfler. His ability to write and build great grooves and licks. He always gets praise for his world class guitar playing – rightfully so, but I’m not sure we fully appreciate the brilliance and subtlety of his song writing.

The Doors – lyrically and their ability to set an atmosphere, a mood like The End. Also he just didn’t give a sh_t what others thought. He was his genuine crazy Self. I just don’t need hallucinogenics to get into that frame of mind. Comes naturally to me when I let go of all limiting beliefs and fears.

Sam Kinison – I know, I know he’s was a comic not a musician, but his rock and roll attitude and brilliance was very inspiring. He took his foot off the brake and just let it roll. Amazingly enough it wasn’t his life style that killed him, just a fluke car accident. He’s C Wired’s prototype.

When did you know that this was the right path for you?
Frankly, about 5 years ago I became bored just being an entrepreneur creating companies and making money. I didn’t want my children and grandchildren thinking when I was gone that that was the only thing I was good at. I was heavy into music during high school and college. I put it aside when I got married (first time) and had 4 children rather quickly. My first priority was to provide for and support them. I put the music on hold. I saw a license plate 5 years back that said Beethoven, I looked at my second wife and stated I’m going to get back into music. It’s been a ride ever since…

There are thoughts, ideas, beliefs, and knowing. When you know something it’s yours. It’s accomplished. I have invested substantial coin and effort in my music over the past 5 years. Never once thought there would be a financial return. It’s just the thing that I will do until I decide to exit the planet.

What do you like most about what you do?
F R E E D O M. It’s not like creating or running a business which is very cerebral. Creating art in whatever form that takes transcends normal awareness and understanding. You have to understand I don’t really write this material it just happens through experiences in my life. The songs about spiritual growth has been my experience. Climb the Mountain, Gettin’ Sobers A Bitch, Omega. Botticelli Baby, Jessah, Anna Kissed The Sky, Baby Prime Became Baby Blue. All great expansive relationships with beautiful women who have graced my life. The music comes first then the lyrics – it’s like an out of body moment. When I am done with many of my songs I sit back from The Observer, a third person perspective and go WoW!

What do you most hope to accomplish with your influence?
Serve as an example of what you can accomplish and do regardless of any pre-conceived beliefs that you can’t. He’s too old. LOL. How old are you? We answer that question by the number of years the body we are currently inhabiting has been in physical form on the planet. We are not our bodies. We are all eternal. Past lives, etc. I don’t understand the admonishment to act your age. WTF does that really mean?

What is the biggest obstacle you have faced in your career, and how did you overcome it?
It really always comes down to fear and self doubt. Not accepting the co-creative gifts and talents that are inside of us all. We are all magnificent. In time, some of us just realize it sooner than others but we are not special – we will all get there eventually and since there really is no time in Spirit, what’s the difference of who becomes aware first? It’s like we are all golden kernels of cosmic potential. Like a bag of popcorn where some pop first but eventually the whole bag explodes. We all have a Peaceful, joyous future ahead. Don’t let the challenges of today dismay you, through shared vision we will create a new world. This is Love, the unstoppable creative energy of the Universe that’s inside of us. Latent, waiting to manifest into a new reality.

What do you want people to remember most about you and your career?
Where the f@ck did this guy come from and what was he taking? LMFAO. (I don’t do drugs or alcohol). Just live from a philosophy of no rules, no limitations, no boundaries. Just do no harm and stay out of jail. Don’t take yourself too seriously it’s all going to be fine.

What are you most looking forward to this next month?
Working on the next EP, writing more material and getting the band rehearsed up for our European tour. Maybe I’ll calm down a little, but not likely.