“Life is truly a journey, and it’s not the destination but the paths you choose to get there, infinite number of choices that mold you into what you where and what you become, and some luck behind you never hurt. ” – @dushaneband

GETTING TO KNOW DUSHANE
by Jacqueline Jax host of A.V.A Live Radio

Music labels…
People like to categorize, I understand that and sometimes you don’t exactly fit into one, so maybe that category is what you name it, so for purposes of labeling we like to think of ourselves as Urban-Country. Our music is a cross between Southern, Country, Rock with hints of bluegrass done New York Style.

I guess you have to know the history of where I came from to see where that came from. My first band was called Law and Order, we where signed by MCA in the early 90s, we were considered hard rock but we had a lot of delta influences and heavy on the blues.

We had a talented producer who did all the ZZ Top records who was very known in Nashville (Joe Hardy). He taught me a lot about recording.

We loved Mississippi, we decided to donated the proceeds of one of our songs to the delta museum in Mississippi to help fund musicians and their families who got the bad end of things, and in doing so we where given keys to the city. So we embraced the whole country/southern rock style.

We had a lot of success going out on tour with bands like Guns and Roses, Perl Jam, soundgarden, motorhead. It was a long journey that brought to DuShane band.

Challenges that you’ve had to overcome…
I had to carry on after the loss of family, friends, ex lovers, marriage, friends dying, bands breaking up, successful records with out any push, you name it. Everything is out there for you to overcome.
Life is truly a journey, and it’s not the destination but the paths you choose to get there, infinite number of choices that mold you into what you where and what you become, and some luck behind you never hurt.

I’ve been playing music since I was 4…
singing and song writing, my father was a musician and a big band leader so I was brought up with it in my house.

Alabama Rain…
The song is about a striving new family in Alabama trying to make ends meet in a part of the country that has more layoffs than most of the country, It centers on someone who I met name Johnny who had a tough life growing up then finally meeting the love of his life that changed his world. After his lay off he couldn’t find any work to support his 2 boys so he joined the army to make ends meet at home and keep his family safe. In sum, It’s a beautiful story about a man who loves his family so much he would do almost anything to keep them afloat.

I record everything in my tiny apt where I have a full recording studio. No place for things like a stove which I had removed, soon the frog is going as well, just racks of gear and instruments and a big ole’console.

I live in Manhattan…
the music scene is great here, NJ is a great place to showcase country music, Manhattan is very diverse and when country bands play here it’s a sea of cowboy hats, it’s a real treat. Manhattan is very diverse, it’s all about restaurants, music has a very small role here but Brooklyn, NJ, CT is loaded with places to play and go. Fav is the PNC in NJ though.

For fun…
I play ice hockey all the time, when I am not strummin’ I’m skating

Music business is…
more so now in the possession of the musicians, that is until you get famous, then you have a corporation and that’s when it becomes a real challenge.

Pros and cons have I have experienced…
The glorious highs and the deep down lows, Had a record that sold very well in Europe, many say it went gold in 4 territories and the company went bankrupt so we never saw any royalties, great hearing about it though.

Hurdles and pitfalls…
Anyone in the business has had to and I don’t feel like I have anything more special than the next artist, We all have them all and the stories are plenty. Here’s a positive one though, one day after the bottom dropped out I decided to run , so I got my kicks on and went running and went running, I ran so far and so long I began to feel like Forest Gump, it cured me. I really think everyone needs to find their escape because it’s a long and hard road and it gets tough.

Social media…
Love it, it puts the bands in control for the first time in history, it can take a band from out of the blue and get them national without the help of the machine of the industry. 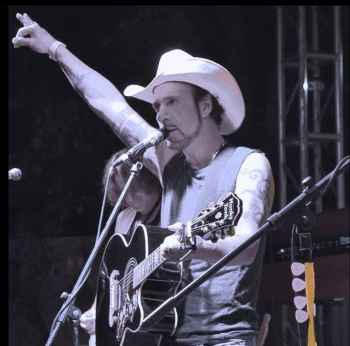 Singles vs an album…
I like singles, its the way they use to do it, when you made a record back in the day it really was a single with a B side. Nostalgic kind of thing, my pops released a dozen singles back in his day.

Well it’s all about perseverance and dogma, sprinkled with a little bit of luck and hard work. Try your best to get your brand out there, hit all angles and don’t be afraid to spend some money on taking a chance. Get the best product you can to showcase and go from there. That is true of all business, should make no difference for music.

I would love to have 5 minutes alone with…
Dead or Alive ?

Alive: I would say Eric Kripke, producer of Supernatural, I would love for him to produce a video for our song “Devil Sin”, I am a true fan and believer in him and his show, amazing to the last.

Current and trendy…
Yikes that’s a loaded question, nobody likes to be considered a dinosaur and everyone wants to stay current and original, yes there is if you think the same way I do, I use think why don’t country bands write their own songs, and it is clear that you must tour a lot, you must do in store and radio interviews, your on 24/7 so when do you get a chance to write mind blowing songs in a short amount of time. You can’t go away for a year or 2 and comes back, peoples attention span is so limited as it is..

I am most afraid of…
Running out of idea’s, not able to play hockey or run, Manhattan caving in from all the weight from all of these tall buildings.

My personal definition of success is..
I am a success story because I endure it all and I still have faith in God and mankind, live in the big city and see if you can have the same outlook after a few decades LOL, My ex use to tell me that I needed to quit and that music is a pipe dream, even though you had success it’s so incredibly hard to be successful, ok maybe she was right but lets not give her that one ok…

My over all goal for my life & career is…
Keep learning and trying to be fair and honest with myself and try to write songs that reflect that.

1) I work out everyday- that keeps the mind fresh and healthy.
2) Keep writing, I write songs all the time, I wrote some songs while I was sleeping and woke up singing the melody,
I literally have hundreds of songs that are waiting to be recorded, keep playing shows, I need to find a good tour for the band.
3) Always love your fellow man/woman – we all need to contribute to that.