“Success is recognition, especially from people who I respect. But also helping people and making a difference. I like to work hard and see it pay off with whatever form of reward you care about.” @JaneGjestland

GETTING TO KNOW BLACK ROSES
by Jacqueline Jax host of A.V.A Live Radio

Coming together..
Bjorn taught himself to play guitar at a Young age then soon moved to songwriting , engineering and producing. It is his life and he spends every evening In his studio. I (Jane Gjestland) was pretty much forced into songwriting after returning from 2 years in the US. I have been singing most of my life but coming from a small town In Norway there was Limited options to learn formally. Later on I started at a Music School but it was not a good fit due to all the restrictions and one size fits all type of attitude. I met Bjorn at age 15, got to know him at age 17 and we hooked up. We started songwriting together in 2001 and I have been the demo singer now In his studio every since. We started Black Roses at the end of 2014.

Success…
Hard one … first thing that comes to mind is recognition, especially from people who I respect. But also helping people and making a difference. I like to work hard and see it pay off with whatever form of reward you care about.

I Want…
Happiness and do something you love for a living. “Full fulfillment” maybe is the word ? 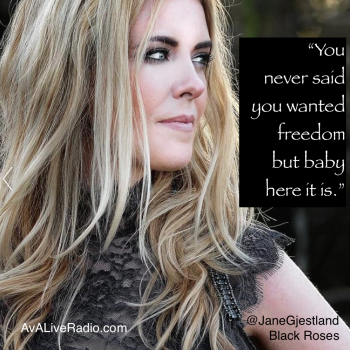 “Want This”…
Want this is about someone giving you exactly what you want (everything is perfect) until there suddenly is an ultimatum that you are not able to compromise on. The first line is key In that I Say ” you never said you wanted freedom but baby here it is” . So I am breaking up with someone in the song because they just broke my heart with a demand/request/ultimatum. It is a true story and I had been seeing this guy for a long time when, to my surprise he suddenly said he was not after a relationship. (Listen to the song: (https://www.reverbnation.com/blackroses1/song/23326479-want-this )

Similarly I also had a friend who did not want kids and the boyfriend did the same kind of situation. Once it has been said, it changes everything and breaking up is the only way forward. Someone you thought you knew suddenly becomes a stranger. The song was written and recorded very quickly. Bjorn first made the melody, then I wrote the lyrics (except the bridge – that was rewritten again during the main recording). Bjørn did all instrumental except bass where another local guy came in to help. Then Bjorn mixed it all. We always have a hard time finding background vocalist that fits my voice so we were luckily to get Tania Hancheroff (Nashville based) to record and send her vocal to us. The mastering is also done by a Nashville based company.

Sandnes Norway..
We live In Sandnes, Norway in a small town on the South west coast. No polar bears 😉 there are many concerts held here and live music on the weekend only at some of the bars. The live music is mainly performed by cover bands. Backstage is a popular place, tau scene and a lighthouse (Tungenes) is where most singer songwriters perform their music here.

I am also a very eager photographer traveling around the world to shoot portraits of different tribal groups. Gives me plenty of unusual experiences and inspiration. My favorite places are Etiopia and Papua NEW Guinea.

Social Media…
makes it easy to reach fans and be heard. I love to get direct feedback. The main challenge is to choose between all the options that are available to you.

Listen to the Live Interview with Black Roses –
http://www.blogtalkradio.com/avaliveradio/2015/08/06/episode-247-ava-live-radio-behind-the-music-with-jacqueline-jax-1
Bio:
We are a duo (Bjorn & Jane) from Norway who has been in the music industry as songwriters/producers for a while – but only recently released two singles as a band. Bjorn is the producer and the composer – and he basically lives in the studio (no joke). He grew up on a farm in rural Norway and taught himself to play the guitar and how to produce at an early age. Jane was pretty much forced into songwriting when she returned after 2 years in Florida in 2001 (as they now figured she knew english very well). Jane had been singing since she was a child – but coming from a remote place in Norway there was no one to learn from and no choir to join – so she made her own singing group called “Happy” (yes, seriously) and selected neighbors to join.
Jane started studying music but felt constrained with all the rules and the lack of flexibility so she moved over to regular college and later graduated from university in psychology. This – mixed with being highly sensitive and a world traveller (heading to remote places in this world on every vacation) has shaped Jane’s perspective on the world and is often reflected in her lyrics. Black Roses are not trying to be different – they simply just are.