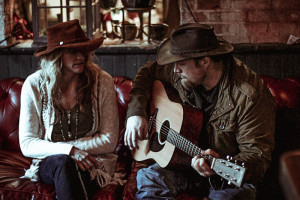 “Maybe it’s just about what makes us happy, and even deeper, what our version of happy is.. I’m not sure I even know.” @JeremyNLynne

GETTING TO KNOW JEREMY & LYNNE
by Jacqueline Jax

Success…
Jeremy: For me, success comes in varying degrees, but on the most basic level success is when someone tells me after a show or in email or Facebook message that they really like one of the songs we’ve written. Or goes out of their way to mention us somewhere or lets us know that they believe in the music we’ve written. Long term and on a more personal level I guess success could be measured monetarily, in that we could make a living just playing music and not having any other jobs! I think that would be my dream, to be able to support my family writing and performing music.

Lynne: Personal success for me has more to do with happiness than money for me. Success is about hard work, learning and taking something away from each experience or failure. It’s also about doing what makes you happy, being able to focus on your goals and being able to balance what you really want to do with what needs to be done.

In the beginning…
Jeremy: I started playing guitar in earnest about four years ago, after a spate of singer songwriters that I was listening too at the time really just seemed to speak to me and I decided pretty quickly that this was something I thought I wanted to do. It’s not a glamorous story, but it’s truly just one of those things, that moved to the point of action.

Lynne: I played electric guitar for a short time when I was younger with some friends but life happens and they moved away, as did I. So playing just kind of fell by the wayside and I actually sold my guitar and amp for gas money to get back to Ohio from Las Vegas. About 3 years ago when Jeremy told me he had started playing acoustic guitar I took an interest again and started playing.

Inside My Head…
Jeremy: The song Inside my head, is about a little bit of everything, but essentially it was written really late at night (as a lot of our writing generally is done) and it was about reflection of all of the choices and roads in the past that you “Could have taken” and how they can consume you if you think about them too much or obsess on them. Maybe it’s just about what makes us happy, and even deeper, what our version of happy is.. I’m not sure I even know.

Lynne: The song really came about from a late night conversation about what-ifs and how you can get caught up in that kind of wormhole.

Drawing Blood…
Jeremy: Well, the title of the album is “Drawing Blood” and the title itself is representative of the songs inside. The songs on the album range across the culmination of both mine and Lynne’s lives… without giving away any ages, it’s been a long time these lyrics have been stewing around. The album is definitely roots rock, or Americana, but it has punk DIY undertones, which are part of what I grew up with. I guess if the album was meant to be heard or understood in any specific way, it’s as an opening of a life, any life… without trying to sound pretentious or really metaphysical, these lyrics are about my life specifically but as they relate to everyone else and hopefully some people can connect with them, and they speak to them about their own lives and circumstances. I think that’s what I at least wanted to accomplish with these songs.

Ohio…
Jeremy: We currently live in Minster Ohio, but I was in the Navy for 20 years, so even though I’m originally from that part of Ohio, I am relatively new back to the area. I would say for me, I like to go see other musical acts, especially original acts, which can sometimes be a challenge in the immediate area, but thankfully we live close enough to Dayton and Columbus that it’s an easy ride to find someone whose out there baring their soul.

Lynne: We live in Minster, Ohio. There are a few places relatively close that have live music and so we get out and see them as much as we can. I also really like to travel, so every couple of months or so I might get a little stir crazy and feel the need for at least a short road trip and weekend away.

Jeremy: For me this is actually a pretty easy answer. I can easily say Neil Young, Bob Dylan Drive By Truckers, etc etc… but if I’m being honest Frank Turner, an artist from England, has to be my favorite and quite a large influence. I’ve met him a few times and he has been absolutely outstanding as a person each time. One of the first times I corresponded with him I questioned whether or not it was even worth getting into music at the age I was, he responded quickly and resoundingly with an unqualified yes, and encouraged me to pick up a guitar and start writing. I mean how cool is that, he didn’t have to do that at all, he just is genuinely that nice of a guy and believes in his craft.

Lynne: – I can’t really say that I have a favorite artist. I just kind of jump around with different people or groups that I’m into at the time. Right now I’ve been listening to a lot of Dawes and Iron and Wine.

Is there an emphasis on being current and trendy or Is there a balance that you have found helpful in your artistic decisions?

Jeremy: Sometimes I guess, but I think living where we live, out in rural Ohio the pressure to be “in” is a lot less than it would be if we lived in a major city. Or at least, there is very little opposition to being un-cool or not trendy. I feel honestly pretty free to be who I am in regards to music, and for that I am thankful.

Lynne: I think that alot of the music and bands in our area do play current music and people like to hear the music they know, so it does make it a little tougher to play your original music at times.

BIO FOR JEREMY & LYNNE:
Long – time friends Jeremy and Lynne began practicing and writing music three years ago. Described by listeners as a Folk/ Americana / Punk hybrid in the DIY tradition; the lyrical content is the focal point of all the original songs. Delving into the familiar territory of a life lived, relationships and past success/regrets the music through the filter of both artists attempts to take on a life of its own. Drawing on influences from old Americana Artists as well as Modern Songwriters the duo tries to maintain the feeling involved with each topic they write about putting their own personal spin on the genre. Maintaining a “bare bones” approach as much as possible and focusing primarily on the lyrics each song they attempt to create a snapshot into the story of a life. Trying to never stray too far from their roots, the music reflects the experiences and situations both have lived through creating a mix of several genres that is at the same time relatable and heartfelt.Jeremy and Lynne are in constant collaboration on new material and released their full length album “Drawing Blood” in March of 2015.