With seven years, 30+ awards, and two guitars under her belt, four-time “Songwriter of the Year,” five-time “New Country Female Entertainer of the Year,” and Nashville recording artist Kristi Hoopes is belting out the country music of tomorrow, today. This past summer, Kristi had the opportunity to record her first album at the historic RCA Studio A (Grand Victor Sound) in Nashvillle, Tennessee after winning Lyricord’s first songwriting contest. Her new single, “At Least It’s Something” has been released and is currently available for purchase on iTunes and 30+ online music outlets. Born in Parker, Colorado on Valentine’s Day, 17 year-old Kristi Hoopes found her love for the stage at the age of 2, entertaining her family on top of the family room coffee table.

Her rigorous AP academic schedule leaves her with little free time, but she makes use of what she gets by riding horses, camping, writing poetry, and hanging out with her friends.Kristi Hoopes may be a small-town girl, but her voice promises to take her fans on a Mile Hi ride. “I am so thankful to have as many fans behind me as I do. This is a journey and I want my them to be with me every step of the way, wherever the road leads.”

Listen to the Interview: http://www.blogtalkradio.com/avaliveradio/2015/05/07/episode-234-ava-live-radio-behind-the-music-with-jacqueline-jax 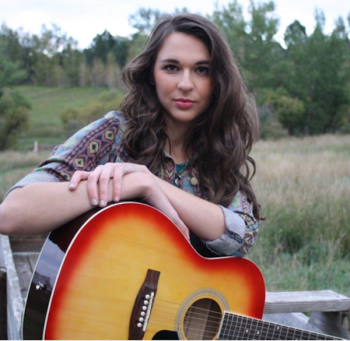 How did you get your start in music..
It all started back in 3rd grade after playing Ebenezer Scrooge in our school’s production of “A Christmas Carol.” No boys had auditioned for the role, so I did and got the lead wearing a bald cap and grey sideburns. I looked absolutely ridiculous, but I loved it anyway! After that show, my music teacher suggested that I audition for the talent show, so I did with Loretta Lynn’s version of Nancy Sinatra’s “These Boots Are Made For Walking.” I made it in the show and that moment onstage sparked my love of singing. On our way home I remember telling my parents that it was something I wanted to do. It seems crazy for a 3rd grader to figure that out so quickly, but there was something about being onstage that I just couldn’t get enough of. Coming from a family in the home building industry we had no idea what we were walking into but my parents told me, “If this something you want to pursue, we’re going to help you do it.”
That summer, I was recruited by a musical song and dance troupe that toured through Colorado, Florida, on a Royal Caribbean Cruise Liner, and in Nassau, Bahamas. The group disbanded a little over a year later, but I wanted to continue singing in front of people. Around that time I had also begun writing my own songs so we started adding those to the set list that I was doing at local county fairs. I grew up with music from all over the spectrum. My dad — who may just be the biggest Kansas Jayhawk fan alive — was into soft rock and jazz artists like James Taylor, Steely Dan, Eric Clapton and The Rippingtons, while Mom was listening to the likes of Madonna, Prince, Micheal Jackson and Phil Collins. I listened to traditional country too and just fell in love with its sound. Steel guitars, fiddles, and banjos are what home sounds like to me.
When I was 11, my mom found this singing competition that was advertised through our local country station, 98.5 KYGO, with the CCMA’s (Colorado Country Music Association). The CCMA’s led me on the road to Nashville where I won International Female Vocalist my first year and Songwriter of the Year the following year. I’ve also won several Female Vocalist, Female Entertainer, and Songwriter of the Year awards at the state level since.
At every competition and local county fair, my “momager” and I were making connections with people who invited me to play at other venues. Seven years later, I’m touring as much as I can, which is mostly on weekends and during the summer months. I’m especially excited for my radio tour and shows this summer, since I just released my new single “At Least It’s Something” which was recorded at RCA Studio A (Grand Victor Sound) in Nashville. It’s been a wild ride, but I’ve loved every minute of it!

At Least It’s Something…
When I sat down to write this song, I didn’t know what I wanted it be about at first. I’ve been given the nickname of “The Heartbreak Kid” because I write a lot of break-up songs, and my parents say I need to write songs that are more positive. What can I say? I know how to write about the heartbroken! I tried and tried to write a song about being happily in love, but it didn’t seem right. I can’t force myself to write something I don’t feel, and I felt like the music was telling me that happy go-lucky wasn’t going to cut it. I decided to just sit back and listen; the minute I did that, the words started to flow. When I finished the song, I realized that it’s more than just a song about love gone wrong. “At Least It’s Something” speaks to the heart of anyone who has ever lost someone they’ve loved, and feeling the pain of trying to hold onto the memories you had with them. To me, it’s an anthem for loss.

Parker Colorado…
I live in the small town of Parker, Colorado, which is 20 miles away from the State Capitol in Denver. During the Gold Rush of the 1860’s, Parker was the town to stop and rest at before making the trip to what was then called ‘Denver City.’ Parker was also known during that time as Twenty Mile Station, which just happens to be what I’ve named my blog. You should check it out! I love driving down Main Street because all of the historic buildings are still there. When my parents first moved out here, there was nothing but a two-lane highway, a couple of fast-food joints, and a local grocery store with a few gas pumps. I think the person that I am today was shaped by living here. It has definitely given me plenty of inspiration!
Today, Parker has grown a bit but still retains its quaint and homey feel with a blend of small coffee shops, local bars, and of course our local fair to play at. I love playing in places like that because the audiences are so willing to listen and you can just enjoy yourself. In the summer, my friends and I love to relax at O’Brien Park under the cottonwood trees or spend the day checking out the shops and cafes. I couldn’t imagine living anywhere else!

Social media…
I like that I can easily connect and share my music with anyone, anywhere. My music is playing over in the UK, France, Switzerland, Sweden, and the Netherlands, but without social media that would never have happened. I do owe a lot of my current success to social media, specifically a group called Lyricord. They followed me on Twitter and when I saw that they were holding a songwriting contest, I decided to sign myself up. Lyricord is a free app that allows you to write lyrics to pre-recorded tracks in their catalog of various genres. After downloading the app, I started listening to a couple of the country tracks and was quickly stuck on one called “Laying Back,” which would later become “At Least It’s Something.” Lyricord and my song “At Least It’s Something” got to me to RCA, and for that I am extremely grateful.
The hardest part about social media is finding and targeting your audience.You have to vigilant about posting things that engage and bring in new fans, and you have to constantly be creative about finding ways to keep people interested. It’s not always easy, but it’s totally worth it when you get people listening and loving your music.

Performing live…
I love the fact that no two shows are ever same! It’s a different crowd every time, and you have to play to that audience. I love seeing them tap their toes, nod their heads, drum the tables, wave their arms in the air, sing along — stuff like that. When the audience is feeling the music, it gives me an energy boost and creates this desire to make the show they’re watching the best show it can be. The part about being a musician that I love the most is having people walk up to you after the show and say, “Thank you for writing that song. I’ve been there before.” Those moments remind me why I write music and how much of impact it can have.

Success..
Success to me is doing what I love and creating music that people can connect to and enjoy. It’s being able to face the world head on, chase your dreams, not be afraid to be who you are, and get back up when you fall. I like to live by a quote from Arthur Ashe, “Success is a journey, not a destination.” It’s the little victories along the way that are my greatest successes and I love being able to take my fans along for the ride!