Elisha: I began learning music and taking piano lessons when I was four years old. I joined the elementary chorus club at eight years old. When I was ten years old, I began to teach myself how to play guitar and take a further interest in music. I started my own rock band when I was twelve years old, and began to play bass guitar the year after that. On September 13th, 2014, I joined Above The Skyline as the bassist and secondary vocalist.

Zach: I was forced into piano lessons at eight years old by my mom. Then forced into middle school band by my mother again! I then began to develop my passion for all things music. After starting and joining bands in high school; I joined Above The Skyline in October 2013 as the lead singer/keyboardist. 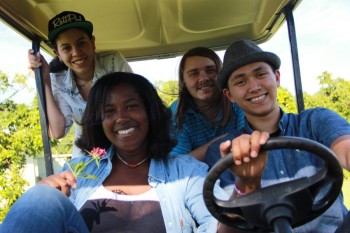 Eric: Eric Green, Lead Guitar: At the age of 5 Eric was enrolled in Music Time for Kids sponsored by the University of Miami and was introduced to music history and theory. Around that time he began piano lessons and continued studying and performing at recitals until the age of 9 when he asked to try guitar lessons. While taking lessons at Music Depot he joined their Rock Ensemble program where he met drummer Chloe Santiago. They have been playing together ever since. They took the rock ensemble idea a step further and started their own cover band made up of 11 and 12 year old named Xpelled. That band lasted 6+ very successful years that included paying gigs. Near the end the band name changed to A Few Seconds Late. When he was 15 he joined a Post-Hardcore band named Unarmed for Victory and has toured around the country with them. At 16 he was also in a band named Kamantra, a classic metal cover band, that lasted 2 years. He is one of the founding members of Above the Skyline.

Chloe: Chloe Santiago, Drums: Chloe began having an interest in drums at a very young age. As a toddler she banged on pots and pans and eventually, by the time she was seven, asked for her first drum set and to receive lessons. Growing up she spent most of her days playing music throughout her entire academic career inside and outside of school. From the age of 9 she started playing with Eric in cover bands in a Rock Ensemble program. At 11 she and Eric started their own cover band, Xpelled and later changing the name to A Few Seconds Late. She also joined her middle school and high school marching bands becoming captain in her 7th, 8th, and 12th year. After graduating in 2013 she joined Above The Skyline as their drummer to pursue furthering her lifelong dream in music.

“No Voice To Yell”
is one about a girl of course. About a relationship that cannot work and you know it, although you are still pleading for it to last. Although it has a fun and energetic feel it is one that is personal to our singer Zach. We had a lot of fun recording this song especially when we added the group “Hey!” sounds together as a group.

Homestead, Florida…
which is about 45 minutes away from the city of Miami. The music scene here is a growing one filled with a lot of talent, with bands such as Long Shore Drift, Cannibal Kids, Eric Vick Band, Sunghosts, and The Oski Foundation. Some things we as a band like to do are going out to eat, partying with our friends and going to local shows.

Trends…
At times yes, we believe there can be too much emphasis on trying to be the “next Maroon 5 or Ed Sheeran”. We pride ourselves on being different. Everything from our music to the way we are as people. We feel like being current and trendy is really just how people perceive it, if people like it and like our music that’s all that matters.

“What we are striving to do is to make the best music we can possibly make. We want to make a connection to people with our music since music is such a universal language. All of our songs have a meaning and back story to them, and we hope people can relate to it and enjoy our music. ” @ATSbandmiami

Success…
Our personal definition of success is to make a living through our material. Being on the radio everyday or being on Jimmy Fallon is all just a plus. We are doing what we love, and to make a living off of what you love, that’s success.

What’s Ahead..
Hard work, hard work, hard work. Everything from practices to promotion, we plan on recording new music in the near future; a follow up to our debut EP “A Different Breed”. We also plan to play as many shows as we can, in order to develop our growing fan base.

Listen to the live Interview: http://www.blogtalkradio.com/avaliveradio/2015/05/07/episode-234-ava-live-radio-behind-the-music-with-jacqueline-jax