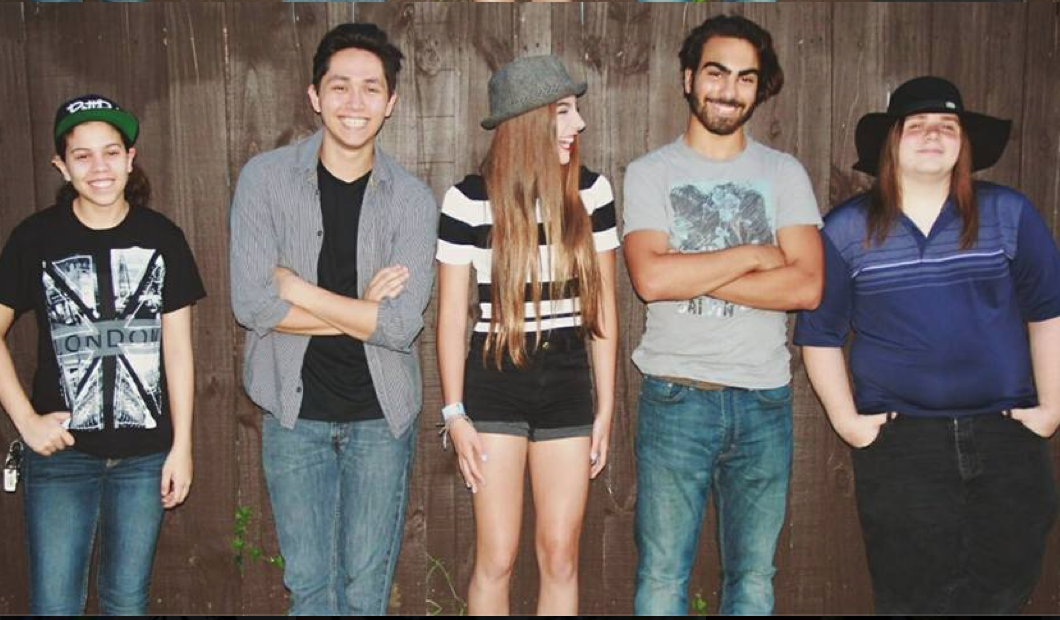 “The most important thing…. We are a fun lovable goofy family that wants to get to know you! Through our songs or through our performances we search for that human connection.” – @ATSbandmiami

Listen to the Interview
Episode #319 : A.V.A Live Radio Behind The Music with Jacqueline Jax : http://www.blogtalkradio.com/avaliveradio/2016/04/28/episode-319-ava-live-radio-behind-the-music-with-jacqueline-jax

CATCHING UP WITH ABOVE THE SKYLINE
by Jacqueline Jax host of A.V.A Live Radio

Well since we last spoke…
there’s been so much happening, we have two new band members to introduce. Alec on bass guitar and Peach on vocals. Alec has fit in with us so well and he is such a quick learner and is a natural bass player, the sky is the limit for him!

Peach…
is a solo artist that has over 20 unrecorded songs that she has started to bring over to the band. With her and I sharing lead vocal duties and harmonies, it opens up a whole new realm of possibilities on stage. She is a captivating performer and also someone who fits in perfectly. Also, we have this amazing music video that we just cannot wait to show to everyone and their mothers. Lots of changes but they are all good ones!

“Don’t Cut Out The Light” is the third song off of our EP “A Different Breed” : Video created by https://prizeboxproductions.com/

The music video for “Don’t Cut Out The Light” is produced by Prize Box Productions. They got some great shots of us playing and they also hired some unbelievable actors to play the story. The message the video brings with this song is a real one, it is not a glamorous road. We know people can struggle with mental illness for days, months, sometimes their whole lives. The video and song both end with an uplifting message and we here at ATS want you to know that we will stand by you and we are here for you. We will not Cut Out The Light on you so Don’t Cut Out The Light on yourself.

We are an alternative rock band with a twist!…
Meaning that our styles might change from song to song but we will still maintain our distinct sound and edge that you love, dance, or rock out to.

Our live performances are…
one of the most important things to us. If you can’t replicate what you do in the studio on stage, then it’s not real!

The most important thing….
We are a fun lovable goofy family that wants to get to know you! Through our songs or through our performances we search for that human connection. We want to relate to you in anyway shape or form and let our music take you on a good time or help you through a rough time. That’s what it’s all about!

We have been a part of many foundations including Relay For Life…
which we do every year here in south Florida. We have played at an event for pet adoption run by Vanessa Spatz who has helped us so much along the way. And also with this music video coming out we would love to be involved in a foundation for anti-bullying or suicide awareness.

First, nothing is going to happen overnight….
This takes hard hard work and determination. Secondly, always be supportive of your peers in other bands and other fellow musicians. If you don’t show the love you will get none back and then nobody wins. And lastly, just. Have Fun. Being a musician is something others dream of doing and it really is a privilege. Enjoy every second of performing, practicing and song writing, and everything else will fall in place.

At this point we have been so very grateful…
to be a part of many great articles and videos from Balcony TV, to the Miami New Times to Reverbnation. It’s hard to pick just one! We’d say winning an award for Best EP of April by the Akademia awards was one. Also! Being selected by the Driven Music Conference to play a public showcase at Revolution Live was an awesome one as well. Our Balcony TV Video for “No Voice To Yell” has over 220,000 views.

Our favorite social media page is Definitely Instagram!
We can post so much silly stuff on there that people love but at the same time we can post about our upcoming shows and new songs etc.

Social media…
Without social media we’d be a caveman/cavewoman band… hahaha. It plays such a big role in getting yourself out there to the entire world. And through Instagram, blogs and now AVA live radio! It has helped us get so much exposure to gain new fans.

Pushing the Band…
We are doing everything in our power from social media, to talking to people one on one. We are constantly pushing our name and music out there to anyone who will listen, like we said before, it’s all about connection to our audience and we hope that with AVA we can achieve that. You now know who we are, but do you know our music?

For spring and for summer…
we are releasing our new video, and writing new original songs to record another EP in the summer. Yes we will be going back to Texas to work with the awesome Brooks Paschal of Mockingbird Studios for a follow up for “A Different Breed” but don’t fear, we will still be playing live shows around Miami! We hope everyone can check out “Don’t Cut Out The Light” now that it’s released and also can catch us at a show!

Thank you to AVA live radio and Jacqueline Jax and to you the fans. ATS out!