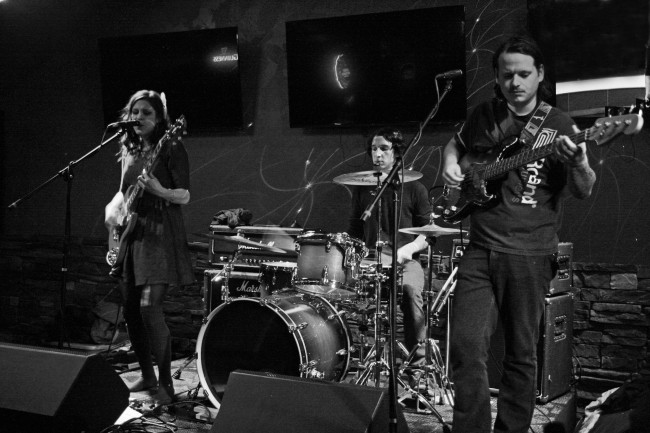 “Shellfish….is a song I wrote while on the tail end of a short, weird, doomed affair. At the time I pretended to blame the stereotypical quirks of Cancers as the reason for the affair’s failure. The lyrics show the tug-of-war between my brain’s fantasy world of longing and pleading to make it work” – Chelsea @PeopleSkillsNH

GETTING TO KNOW PEOPLE SKILLS
by Jacqueline Jax host of A.V.A Live Radio

Starting Young…
Andrew and I (Chelsea) are siblings and both started playing piano at a young age. We both switched to guitar and Andrew eventually started playing the drums. Greg started out on upright bass and moved to guitar as well, although both Greg and Andrew are talented in various instruments. All three of us played ska music throughout high school in different bands, eventually branching out to other genres and forming People Skills in 2011. After many years of playing in large bands, we found ourselves comfortable exploring the freedoms of a three-piece group.

Shellfish….
is a song I wrote while on the tail end of a short, weird, doomed affair. I used “shellfish” as a symbol for the astrological sign of Cancer (the sign of the song’s subject), and the lyrics describe certain traits of the sign. At the time I pretended to blame the stereotypical quirks of Cancers as the reason for the affair’s failure, and the lyrics show the tug-of-war between my brain’s fantasy world of longing and pleading to make it work, and the reality of the situation and my reluctant acceptance of it. https://www.reverbnation.com/peopleskills/song/22755500-shellfish

The songs on “People are People Too” are about different things relating to people and relationships. Some of the songs are introspective and deal with issues like anxiety, insomnia, decision making, regret, excitement, confusion, and general wondering and pondering that young adults experience. Other songs deal with romantic situations like love, longing, rejection, sexuality, and all the feelings that go along with those issues. The songs on the album were written separately over a period of about a year and a half, but somehow they managed to fit well together when it comes to the lyrics and music. The lyrics on the album seem to contrast the music being played behind it, but I suppose that’s a signature part of our whole thing.

The Music scene in New Hampshire…
New Hampshire is pretty spread out when it comes to things to do and places to go. There are a few cool spots in the Seacoast area, which is where we’re from. Portsmouth and Dover have some cool bars where we like to play. Fury’s Publick House in Dover is a great venue that always has great live bands and a really cool atmosphere. We enjoy playing there because the crowd is always responsive and energetic and the staff there treats us really well. As for fun things to do in New Hampshire, we like to support the DIY scene as much as possible. Local organizations like Wrong Brain and Salty Speakers put on really cool multimedia art/music events that give local and touring artists exposure.

Influences…
This is a difficult question to answer if we are required to pick just one artist as our tastes are always changing… but I think in a way we could represent a modern version of The Who. We have only three instruments but create a big, bright and powerful sound, with a mix of psychedelia, heavy riffs, and catchy melodies. We’ve also been compared to Weezer and the Pixies.

Trends..
We haven’t really found any pressure to be current or trendy. If that pressure is being put upon us then we certainly haven’t noticed. It does seem like a lot of bands around us succumb to some sort of trendiness and it’s very transparent, at least to me. I hope no one finds us to be trendy. As for being current…I think as long as you’re doing something new, you’re current. Current doesn’t seem like a bad word the way that trendy does. I think we’re pretty current and I think that’s a good thing.

Moving Forward..
We really want to tour more and are trying to expand our circle when it comes to our gigging circuit. We have a pretty good local following and are working on expanding our following to the surrounding states. We’d love to record another album soon as well, but that’s an expensive dream at the moment.

If heaven exists what’s the first thing you would like to hear god say when you arrive at the pearly gates?
Sup?

Listen to the Interview : http://www.blogtalkradio.com/avaliveradio/2015/04/23/episode-232-ava-live-radio-behind-the-music-with-jacqueline-jax

BIO:
People Skills are a psychedelic pop rock trio from Brentwood, New Hampshire. They have been touring the East Coast for more than 3 years, thrilling fans with their melodic riff-rock.
The group consists of guitarist, vocalist and songwriter Chelsea Paolini; her brother, drummer Andrew Paolini; and bassist/vocalist Greg Baldi. The three members had played with each other since 2003 in various groups, until coming together to form People Skills in 2011. Their catchy, energetic songs feature precise musicianship and effortless cohesion. Sandwiched between melodic hooks and unexpected twists are Chelsea’s climactic guitar solos. Baldi’s tense and rhythmic bass lines drive the songs, along with the intricate dynamics of drummer Andrew.
The trio aspires to spread their sonic passion across the globe.