Success Is when you obtain the lofty goals you’ve set for yourself and are in a position one day to pay it forward. – Swirl @Swirltheband

I got started in music…
after watching my bro DT play with his high school band and seeing KISS perform live. I wasn’t sure how at the time, but I knew I had to get in on that action.
Rise Up …
is all about the suits(corporate world). They have it all and are willing to step on the little guys to keep their lavish lifestyles, but hold the phone cause we’re not going to take that anymore. It’s time to take back what is ours and Rise Up to the top. Our singer Alfred was caught up in the corporate world and was tired of always being stepped on and feeling like its never good enough. So he wrote a song expressing his emotions for the company he was involved with, but the message of the song relates to how so many people truly feel even if they can’t say it out loud. So Swirl chose to say it for them OUT LOUD!!!!!
Southern California…
and the real question is what isn’t there to do? In my small town of Temecula, there’s not a huge music scene, but when you are surrounded by San Diego, Orange County, Riverside and of course L.A., its all good in the neighborhoods. I’m an outdoor guy. Whether it’s fishing or just hanging out at the beach, as long as its outside I’m in.
Social media…
is awesome for bands trying to get their name out there. To have people from all over the globe (other countries) becoming huge Swirl supporters is incredible. The Swirl society is always growing. The biggest challenge would have to be keeping up with all the ever changing sites. Seems like there’s something new every week.
Successes…
To have the support that we’ve received from Japan, which might afford us the chance to go back there is directly related to social media.
The band started touring in 2008 after releasing 2 songs online through My Space. The reaction we received directly led to tour offers and the band has been able to grow globally ever since whether it be through the release of more music or interviews we are doing. All of this is promoted on the various social media sites we utilize so in this day and age any success for any artist is in no small way attributed directly to social media. – DT/ Swirl
Music Trends..
I think you are what you are. Of course you should know about what’s happening now and where things might be headed in the future, but I’m proud of the fact that we took the live aspect of the bands we grew up listening to and brought that live aspect to our shows. You are a musician in the studio, but you are an entertainer when you hit that stage. 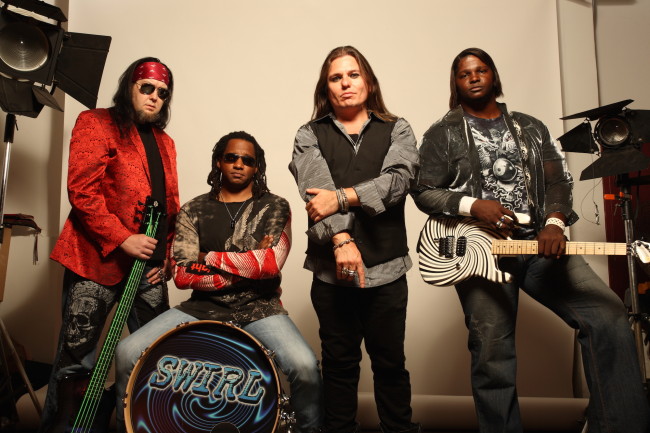 Success..
Is when you obtain the lofty goals you’ve set for yourself and are in a position one day to pay it forward. Swirl’s not there yet, but thanks to articles like this, we keep pushing on striving to Rise Up to the Top.
The timing of that question is so interesting… a couple of weeks ago Brian and I were out at a Thai restaurant sharing a meal of Spring and Egg rolls which cost a total of $11.00. While eating I received a notification on my phone from a childhood friend saying “Congratulations D I always knew you were gonna make it”. My point is that “success” is very subjective. I don`t feel Swirl has “made it”. I do very much feel that we are on our way (as evidenced whether by the touring with very established artists we have done to date in North America and Japan or the ever increasing awareness of the Swirl name globally by people in the rock n roll community via air play, exposure in print magazines and social media promotion), but others that look at what Swirl has accomplished to date and assume we are successful. We are just working hard to make our dreams come true. Success for me will mean Swirl is even more recognized as a band and a brand in the music industry and the members can afford more than Spring/ Egg rolls when we are out for a night.- DT/ Swirl
BIO:
Southern California rockers Swirl are looking for brand expanding opportunities. From their latest release, of the same name, ‘SWIRL’ the band has 3 songs featured in the 2014 award winning movie ‘Ditch Day Massacre’. This film stars Emmy Award winning actor Bill Oberst Jr. This film took home the “Best Feature Film” Award at the Burbank International Film Festival.(http://thefilmditch.com/music-artists/). The songs are “Rise Up”, We Are Alive” and “Spell”.
The hard rock disc ‘SWIRL,’ demonstrates the strong, powerful, hook laden, song writing that is synonymous with Swirl music but, captured in a modern sound and production style that creates instantly memorable, emotionally im-pactful songs.