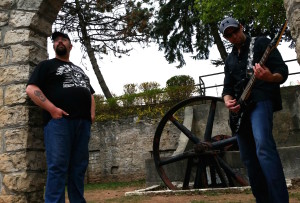 Listen to the interview: http://www.blogtalkradio.com/avaliveradio/2015/06/11/episode-239-ava-live-radio-behind-the-music-with-jacqueline-jax

GETTING TO KNOW ONE MINUTE SHY
by Jacqueline Jax

3 Goals..
3 goals we are working to achieve are to find other musicians to join us, keep recording music and videos that people can enjoy as much as we do, and start playing gigs.

Success…
Our definition of success is having the freedom to do what we love to do full time which is play music and share it with the world and hope it brings our fans as much joy as it does for us.

We both started playing guitar when…
we were teenagers living in Northern Ontario, Canada. Scott actually started playing guitar first which I thought was really cool so I started to play as well. Our grandfather is a musician and he showed us a few things on the guitar to get us started. From that point on we were hooked and we self-taught our selves the rest. We started a band in high school and played local shows and even recorded a demo tape at a local recording studio. We have always been in to hard rock and metal and we were heavily influenced by Metallica back then and still are to some degree today although I think our playing style and song writing has evolved in to a more original sound. After high school we both moved to Southern Ontario to go to college and continued to play music. At this point our original drummer moved out west but we still had his drum set kicking around so Scott was playing around on them and realized that he was more natural at playing drums than guitar! We found a new singer/guitar player and our new lineup was born with Scott on the drums. We played quite a few shows around Southern Ontario and recorded another demo in our home recording studio. We had hopes to go somewhere with our music but as time went on things in life happen that changes things. Our singer left the band for various reasons and our bass player moved away and started a family. It was just Scott and I left at this point and with our dream of being rock stars crushed we took a break from the band. I’d say a good year and a half went by before Scott and I started to jam together again. We would practice and our original bass player would come over once in a while to play. For quite a few years we just jammed for fun and wrote music. We ended up getting some cool recording equipment and an electronic drum set and set up another home recording studio at Scott’s place. Over the last couple of years it’s just been Scott and I playing and recording. A few months ago a really close friend of mine asked me what we are going to do with our music. She could see our potential and her question motivated me and got me thinking. Then one day the idea just kind of hit me to start filming ourselves while recording our music and upload the videos to YouTube. This way people could not only hear our music but watch us play it as well. We don’t have a singer at the moment so all of our songs are instrumental. Scott plays the drums and I play all the guitar parts and bass. Since it’s just the two of us playing, live gigs aren’t possible so being a YouTube band is ideal for now. We have all this amazing technology today that makes it easy to do this so we tried it out and it worked out really well. We re-named our band One Minute Shy which was actually a name of one of our songs but we thought it would make a really cool band name. We posted every thing on reverbnation.com and YouTube and in just over one month we were ranked #1 in our local category and we got up to #5 in Canada! Social media is an amazing thing for musicians and we try to record new songs and videos every week to share with everyone who follows us!

Through the Eye of the Needle…
One of our favorite songs. We always have fun playing this one. There are no lyrics since we play instrumentals and we like to choose names for songs that we think sound cool. Our music is great to listen to while driving, working out, etc. You can put any story you like to our songs which is the great thing about instrumentals. Every listener can get their own meaning and emotions from them. We wrote this song last year and the guitar riffs just kind of happened from a jam session. We love jamming and often the ideas flow easily. After a bit of arrangement and working it out, we had the song finished. An earlier version was recorded last year but we didn’t have a video for it so we re-recorded it a couple of months ago. The recording process is always a bit challenging and time consuming but well worth the work we put in it. Usually we get together one day on the weekend and record everything. This can take 7 or 8 hours sometimes and many recording takes. After the song and videos are recorded, I mix everything on the computer and put the video together usually over the next couple of days after the recording takes place. This is another lengthy process! I remember some funny moments during the recording of this song where we would be having a really good take and my pick flew out of my hand for whatever reason and then during another take Scott’s drum stick flew out of his hand! This was also sad too because we had to re-start the recording process each time! All in all though it makes for fun moments and good memories. Scott and I gel exceptionally well together and I think this is because we are brothers and we’ve always been really close. We think very much alike when it comes to our music and we often come up with the same idea before we even speak it!

Guelph, Ontario, Canada…
There is a great music scene here in Guelph and surrounding cities. There are many venues for bands to play at and festivals as well. Kitchener, Ontario which is about a 20 minute drive from Guelph has a local Metal Fest and Blues Festival and I know Guelph has festivals as well for local bands. The music community is close knit and bands are very supportive of each other and try to help each other out. Since posting our music on reverbnation.com we have connected with quite a few local bands and we share each others music and news on our social media sites. There are many pubs around here as well that have open mic nights and there are battle of the bands events going on too. We are also about a 40 minute drive from Toronto so there are opportunities for local bands to play there as well. For fun, Scott and I enjoying online computer gaming and I am also a personal trainer so my other big passion is health and fitness. On most days I will be working out which keeps me in shape and this helps me play our songs easier since they can be a workout by themselves!

Breaking into the music mainstream…
I think it’s difficult to break into the music mainstream because there are so many bands out there and you can kind of get lost in the mix. I think lack of exposure and not knowing what to do makes it difficult as well but with a program like yours, reverbnation, and social media, it’s now much easier for bands to put themselves out there. Our style of music being instrumental heavy metal can also make it challenging to be a mainstream band. As an indie artist, I think what is standing in our way the most right now is that we can’t play live gigs. We would have to find other musicians to start playing shows because after building a great following through social media, people will want to see us play live. We have already been asked when we will play shows so the fact that it’s just the two of us is the biggest roadblock to doing that.