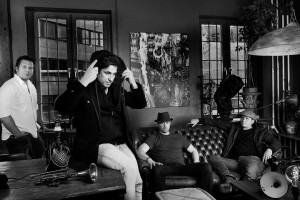 “We want to communicate feelings or reflections through the songs and we want the music to be considered genuine and unique.” -@SherikanMusic

Listen to the show: http://www.blogtalkradio.com/avaliveradio/2015/09/03/episode-254-ava-live-radio-behind-the-music-with-jacqueline-jax

GETTING TO KNOW SHERIKAN
by Jacqueline Jax host of A.V.A Live Radio

Success is…
A live performance in television? A tour in US? 1000+ fans? 200+ sold CDs? Actually we are extremely happy every time we have created a new song which we like.

Challenging themselves…
By putting pressure to play gigs regularly as well as releasing music twice per year we believe we will keep the process running. After all it has turned out to become a bit addictive to write lyrics and songs.

Starting in music…
Niklas started to play the guitar and perform with bands as a teenager. He even arranged some local charity concerts in the 80’s. He used to play in clubs and local parties for some years but over the last decade he has been more focused on creating his own music and gave up on the idea of playing covers. Niklas is very creative in terms of music but when it gets down to writing lyrics it is very hard for him. When Bjorn and Niklas got to know each other a few years ago Niklas started to introduce the idea of letting Bjorn write the lyrics. Niklas recognized Bjorn’s potential in terms of playing with words. Bjorn always liked the idea of writing but never did anything like writing lyrics for songs. In April 2014 he sent two texts to Niklas who created two songs within a week. Since then more than 20 songs have been pulled together between the two. So far it always starts with a text from Bjorn which Niklas then uses as the inspiration to a new song. Sometimes Niklas asks Bjorn to correct or amend something but lately the songs are coming together like bread and butter.

Queen of Everything…
This song is about Bjorn’s older sister Marie who suffered from mental illness from the age of 20. In the late 70’s she was an ordinary, very attractive young girl but she got depressed after the death of her father as well as breaking up with her boyfriend. She tried to cure her sadness by shopping and looking good – had numerous new boyfriends and eventually fell into permanent mental treatment from the age of 25. Bjorn and Marie talked to each other every day, but she had very few friends and lived a very lonely life. It all came to a dramatic end a couple of years ago. The song is a tribute to Marie and the whole band feels very much the same about this song due to its dramatic context. We also believe that the song may apply to many young girls who try to be top notch.

New music…
The album was released early July, we picked the songs where everyone in the band liked the rhythm and sound. We are very proud of doing everything acoustic and we believe that the type of music we have created is a mix of pop, rock, country and folk music. We want to communicate feelings or reflections through the songs and we want the music to be considered genuine and unique.

Living in Sweden...
We live in Gothenburg which is a city in Sweden. Gothenburg is well known for having a rich music scene with lots of talent and indie bands. In the summer we like to go for daytrips along the fantastic coastline and have BBQs. We also love skiing.

Music trends…
We haven’t put much effort yet into image and trend decisions. We cooperate with a professional artist (VAGNELIND) who helps us to find the right look and feel of our web site, logos etc. We have to start thinking about our appearance for our upcoming gigs. We have a connection to Tigers through our band name, web sites and our logo – and we think that some kind of cooperation to save tigers may be a good idea.