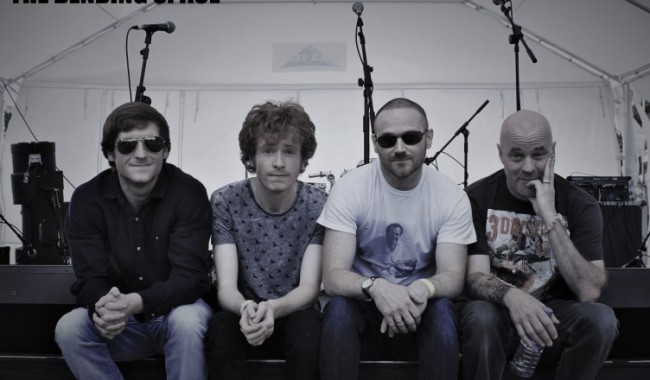 “Success for us would be that we are still making music together in 10 years’ time and enjoying the process.” @thebendingspace

Listen to the show: http://www.blogtalkradio.com/avaliveradio/2015/08/27/episode-252-ava-live-radio-behind-the-music-with-jacqueline-jax

GETTING TO KNOW THE BENDING SPACE
by Jacqueline Jax host of A.V.A Live Radio

The music business is…
a very fragmented and mysterious entity. A couple of us have been involved with independent companies who were ok and let us get on with what we wanted to do. Of course the family connection with Gentle Giant means we have seen the effects that the slightly more pressured commercial environment has on the artist. But that was very much the 20th Century music industry.

Every musician or writer who wants to work and share their talent or message with the masses for a living does require a benefactor. That’s all the industry appears to be. They are just the modern equivalent of the royal court. The traditional identity of the business seems to be that it was just another power structure or obstacle to artists with the main priority of making as much money as possible out of a product. That’s probably true but the process is far more polarized and confusing to us. The industry isn’t an obstacle it’s multi-faceted and picks and chooses what it likes and puts as much or as little effort into promotion as it sees fit. But there are so many operators in the business it’s possibly unfair to suggest every operator holds the same ethical practices.

The music industry is certainly an establishment and there seems to be a lot of rules associated with the commercial business. For us it all seems in-congruent to being a progressive artist. Hard core fame must be a drag but we have very little sympathy for the big stars that complain. It’s a choice to deal with the record industry at any level. I think we’d all agree getting any third party involved with your music is risky. They’d better be a damned good friend or you’d better sleep with one eye always open.

Music Trends..
It’s not something that keeps us awake at night. There’s going to be trends occur in every art and genre with every new generation that develops an interest in the medium. It’s a business interest that exploits the buzz and creates the emphasis. The artist is not really in a viable position to do much about it. If you complain about these things you immediately appear detached or anachronistic and guaranteed it will work against you.

The nature of trends is that they change. Therefore, as an artist it’s utterly futile to try and adapt to current trends unless you created them. A niche market can always be found. Nobody is that far ahead or behind generational concerns so, artists should find relevant issues to write about and convey them in the execution of their work. It’s probably best just to get on with what you do and try to target the most pertinent audience for your work.

I challenge myself by..
Well, it’s all about remaining positive and progressive about music and communication. We constantly challenge our own capabilities musically. We always try to improve technically but also search for new sounds and influence both inside and outside of music. We look to the past and present for influence and attempt to embrace all styles. We also strive to be pertinent with respect to how and why we communicate the music we produce. That’s a big challenge for us.

I am most afraid of…
That’s easy, emotional and physical pain and of course poor personal hygiene.
Success for us would be..
that we are still making music together in 10 years’ time and enjoying the process.

Social media..
is great on a personal level. It’s immediate and convenient. There’s a tendency for people to show the very worst side of their personalities but maybe that’s a good thing. You work out very quickly who to avoid.

As a band we don’t really know if it is of any benefit to us at all. The big challenge for any band is knowing if any of your activity is of genuine interest to the target audience. Most people seem annoyed if unknown acts promote themselves so, potentially using social media can be more harm to bands than good. We use it sparingly but have not found any great benefit.

We come from a musical family…
My dad and uncles were in a progressive rock band called Gentle Giant in the 1970s which certainly made an indelible mark on me and my sons of course who play in The Bending Space. We have all been tutored in one way or another and performed at varying levels so, by now our lives just revolve around playing music and trying to establish new ways to improve and experiment with it.

‘Evidence’…
observes the lengths that some people will go in order to command power and respect on the basis of their own self-belief with apparently no conciliatory attributes. It’s also an observation of how odd it seems that huge groups of people become subservient to these individuals presumably out of some kind of self- interest as well. We realize that history and many personal relationships are littered with people who are willing to manipulate the truth or lie or be extremely violent in order to achieve highly questionable objectives.

The song basically tries to make this very general observation about impropriety with power as an honest but cursory warning. It’s the kind of frustrating conversation topic we might have in a pub and realize that we have absolutely no influence over these matters so, will move on to sports or personal ailments and order another drink. The music is intended to correspond with the anxiety and irritation conveyed in the lyrics so it required a punchy over driven sound which I think is reflected in the recording.

The video was basically filmed on a cheap little camera during a lunch break and during a band rehearsal. I guess we don’t really invest appropriate time into making videos. Even if we had the time and money we would still do a terrible job. Just not cut out for video making, but the results make us smile.

Single vs Albums…
In today’s market I’m not sure it makes too much difference what you release. As an artist it’s very difficult to judge how people want their music and ultimately that’s not our concern. We have to make the best music we can. I think as a group we possibly prefer the idea of making an album. A portfolio of work that conveys a view of the world or a concept at a particular time is interesting to us. But that can be conveyed in a song as well. I guess we don’t have much of a preference. There is so much music out there and most of it gets ignored. I think it’s appropriate to reference John Scofield on this issue. In his interview with zzsounds.com he states how many unknown artists release CDs or digital albums etc. on their own initiative and in general they don’t get listened to for many practical reasons.

He says, the best thing unknown bands can do is get out there and play. Network. Meet your fellow musicians because that’s immediate and the most likely way the word is going to be spread about your sound. That said, of course we released an album and EP and we’re kind of regretting it because our sound is different now so, what is out there is not really an appropriate representation of us. So, our marketing strategy now is based more on immediacy and what we do in the moment. From our position we need to connect and feel the connection we’re making. If we make recordings and sit back hoping to be discovered we’re not being musicians. The best we can do is enjoy the experience of playing music and communicate with any audience either in person or by putting out live performances on social media.

Gosport England…
We live in a small town called Gosport which is situated on the south coast of England in the UK. There is a little music scene here being driven by some dedicated guys in a hub of activity called Quay West. Their efforts should be praised because Gosport is not a particularly progressive town. It’s kind of somewhere you go through to get somewhere else or somewhere you end up by accident. There are some places to go, like franchise drinking holes but those are probably best avoided.

Generally, for fun we like to play music. Is that too boring? We just love music. It’s complex but relaxing and it’s challenging yet comforting. It’s pretty hard to go wrong with music. That’s what we do for work and fun.

I would like to have 5 minutes alone with….
As the current spokesperson for the band I’m saying Frank Zappa. I take it that as a fantasy question the person doesn’t have to be alive? Zappa was an innovator in music and business. He was an independent artist and split quick from the artist control espoused by the music business at the time. He worked out efficient ways to support and promote himself and produce outstanding original work in the process. His guitar playing is unique and accomplished and his composition skills were outstanding. He gave talented musicians opportunities which established great careers for them. He was ostensibly humanitarian and was appropriately outspoken on some controversial subjects with respect to censorship, the music business and some politics too.

If we could get a sneaky 5 minutes with Frank Zappa we’d ask his advice about how to get the absolute best arrangements from a traditional 4 piece guitar based rock ensemble. We’d ask him how we should effectively promote our music in order to achieve artistic and financial self-sufficiency.

We’d also like to ask how he managed to maintain his dignity and not take a swipe at his opponents when he appeared on CNN Crossfire in 1986.

Bio:
The Bending Space is an independent rock band making eclectic-electric music in the UK.
The Bending Space create and share music to communicate and connect with new and experienced music listeners across the globe. The Bending Space’s music conveys sounds and ideas which intend to open the doors of opportunity for any listeners to explore their own ideas and sometimes to simply dance.