As I stepped on the scale this morning, I knew something was wrong. As my feet reached the measuring tool, I felt a thrilling excitement at the idea of seeing a small number appearing on the scale, which was mixed with the menacing anxiety of seeing a number higher than usual. As unhealthy and perturbing as this feeling sounds, it is a common feeling amongst the majority of Generation Y. Indeed, a lot of pressure is put on young people to achieve a great body and an attractive physique these days due to the humongous emphasis society puts on body image.

Even though Millennials acknowledge the harmful dangers of social media, content surrounding body image can be triggering and very destructive. Since Gen Y has been raised in conditions where advanced technology was omnipresent and fancied, they posses highly computer literacy aptitudes. However, these capacities might lead them to dangerously unhealthy paths. Indeed, advertising, media, entertainment, beauty and fashion industries send messages to the population saying we must look thin and flawless. In fact, studies have found that Facebook use can trigger eating disorders and lead to poorer self-esteem, which asserts that the rise of social media has definitely aggravated the situation. Furthermore, for example, Tumblr and instagram accounts as well as personal blogs stressing content celebrating extreme thinness such as “Thinspiration” and “ProAna”, which stands for Pro-Anorexia, are used as deceptively motivational messages. Hence, the media has a significant role in developing amongst Gen Y an obsession with body image that is strongly associated with anorexia, bulimia, binge-eating and other damaging eating disorders and mental illnesses. 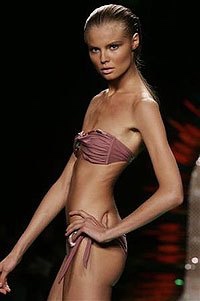 Eating disorders are atrociously common, affecting more than 300,000 Canadians, both male and female. This number is estimated to be double the number of people diagnosed with schizophrenia and bipolar disorder, combined. While eating disorders affect people without discrimination, according to the National Institute of Mental Health, “90% of eating disorders begin between the ages of 18 to 35” (http://www.nimh.nih.gov/index.shtml). Furthermore, 35% of college students develop eating disorders. Overwhelmed by social media and highly influenced by advertisement, Gen Y is the most affected generation in terms of body image and self-confidence.Many factors contribute to the development of eating disorders such as excessive dieting, low self-esteem, depression, body dissatisfaction, bullying, weight consciousness and even genetics. As many college students try to cope with radical life changes such as going to college and the ceaseless stress caused by school might trigger eating disorders. According to the National Eating Disorder Information Centre, “the number of people suffering from eating disorders has grown since 1950 with 20 million women suffering nationwide” (www.nedic.ca). Actually, eating disorders have the highest mortality rate of any mental illness with an estimation of 10 to 20% of individuals diagnosed dying prematurely as a direct result of anorexia nervosa or bulimia. In fact, females with anorexia nervosa aged between 15 to 24 have a mortality rate twelve times higher than any other cause of death. 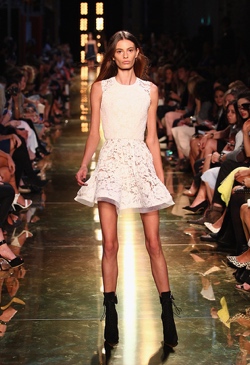 Besides, February 22nd to 28th commemorates National Eating Disorders Awareness Week. With London Fashion Week going strong since Friday, an awareness blog post on body image, health and self-esteem couldn’t be more opportune. Millenials grew up watching award shows and beauty pageants and were raised comparing themselves to models in magazines and actors on television. Little do they know is that these models were photoshoped and these actresses represent only 1% of our population. Since a few years, the fashion and modeling industries have been criticized for promoting eating disorders and unhealthy body images. According to Samantha Chang, Celebrity Fitness and Health Examiner, in a desperate attempt to suppress their empty stomachs, “runway models follow starvation diets, chain-smoke and abuse diet pills and laxative” (www.examiner.com/article/model-details-extreme-dieting-smoking-drug-use-ahead-of-new-york-fashion-week). These morbidly skinny girls are doing whatever it takes to achieve the lean look favored and put forth by the fashion industry. These radical and harmful behaviors strongly influence young adults since they are especially vulnerable to the fashion industry. As it stands, according to the NEDIC, up to 57 percent of adolescent and young girls “experiment with crash dieting, fasting, self-induced vomiting, diet pills, or laxatives” in order to reach the utterly constructed and falsified ideal beauty that is puts forth by the fashion industry (www.nedic.ca).

Working and studying in the fashion industry myself, I am very concerned and affected by the propaganda of tremendously high beauty standards. Since I am a young woman, it is hard for me to cope with all the pressure of looking perfectly toned and flawlessly beautiful while contributing to the cruel values of the industry. All of this has led me to wonder if the fashion industry unconsciouslyexposes you to eating disorders and mental illnesses. Therefore, does the pursuit of high fashion jeopardize your healthy lifestyles?