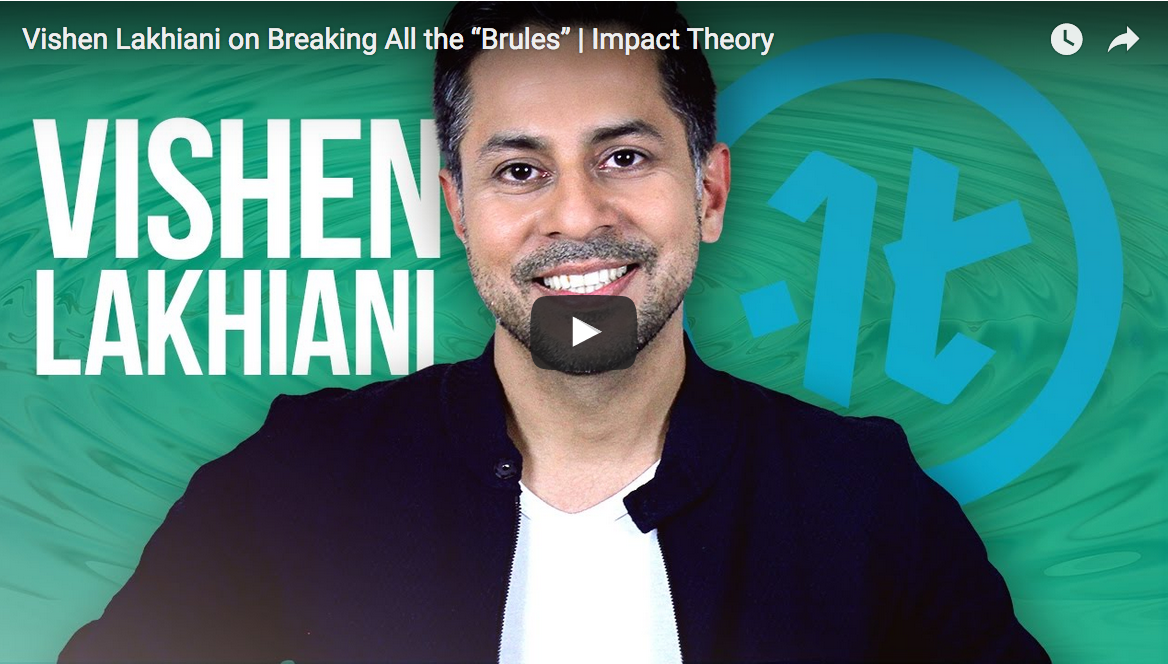 Vishen Lakhiani discovered that if he was going to stay true to his inner identity he was going to have to break some “brules.” The CEO and Founder of the revolutionary global empire Mindvalley Academy, best-selling author, and philosopher discusses changing your culturescape and moving toward your end goals in this episode of Impact Theory with Tom Bilyeu.

Vishen defines the culturescape and “brules.” [2:58]
Vishen talks about why goal setting is rubbish. [7:31]
Vishen shares the three most important questions to identify your end goals. [11:18]
Tom and Vishen discuss parenting and creating positive meaning making machines. [15:42]
Vishen shares his philosophy on parental discipline and fundamental beliefs. [20:40]
Vishen describes the diffusion of sympathy and natural evolution. [22:46]
Vishen describes how he defines himself and his true self-identity. [25:35]
Tom and Vishen discuss the difference between business and true entrepreneurs. [29:02]
Vishen talks about the expectancy effect and the power of the mind. [33:47]
Vishen shares the powerful mission purpose of the Mindvalley Academy [36:41]
Tome and Vishen discuss why 4-year colleges are no longer relevant. [39:52]
Vishen defines the impact that he wants to have on the world. [44:08]

Tom Bilyeu is the co-founder of 2014 Inc. 500 company Quest Nutrition — a unicorn startup valued at over $1 billion — and the co-founder and host of Impact Theory. Impact Theory is a first-of-its-kind company designed to facilitate global change through the incubation of mission-based businesses and the cultivation of empowering content. Every piece of content Impact Theory creates is meant to underscore the company mission to free people from The Matrix and help them unlock their true potential. Impact Theory exists to inspire the next generation of game-changing companies and creators that will make a true and lasting impact on the world.