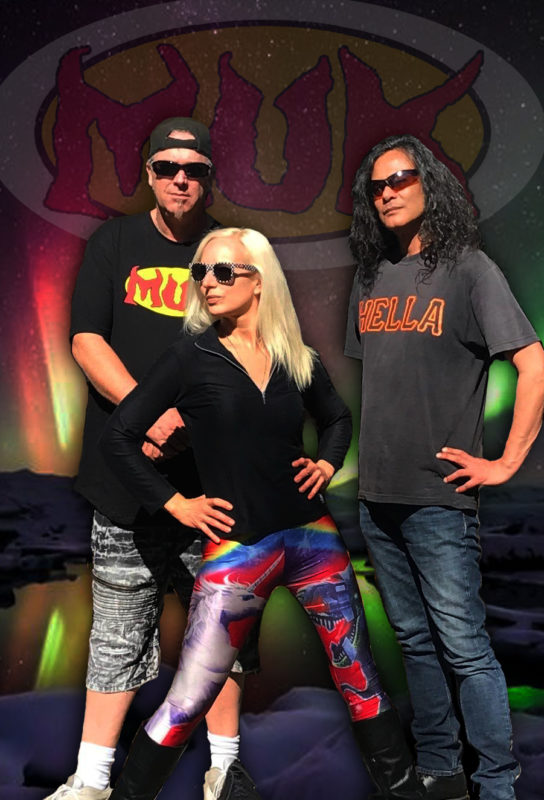 Promising not to disappoint any of their older fans or new ones to come, The California Indie band Muk has come back after years of lying low. The band is dividing up the work and starting to conquer the challenges once again with a more powerful and dynamic energy.

Interview by Jacqueline Jax  host of A.V.A Live Radio
Band Name: MUK
Person Interviewing: James Kilpatrick
MUK is a female fronted 3 piece PowerRock band with real world and personal topics. Paving the way for great lyrics and original heavy sound. Formed in the mid 90’s the band was rockin for 7 years in SF bay area clubs and venues before splitting ways in the early 2000’s.
Chrissy Barlow the Bass player and Vocalist remained active in music as well as James Kilpatrick the drummer. James was in a band called FearNature that was discovered by the Sarah and NoName Morning Show on Bay area Alice 97.3. James ended up doing Jingles for the show with several projects including Jayce Landberg, (Guitar Hero from Sweden). James also started recording music and created FearField Studio and is currently working on MUK’s New Music along with new material with Jayce Landberg and others.
MUK reunited after James reached out to Chrissy in an effort to see how she was doing. Chrissy was ready to fire up the MUK experience again, James agreed it was time. With new Guitar player Gary Stiltz, a well seasoned Bay Area Guitarist most noted for being in the famed ( MCM and The Monster ) Band and long time friend of Chrissy now has joined with MUK to Slay the music scene with the perfect fit for this trio. Promising not to disappoint any of their older fans or new ones to come. The song writing is more powerful and dynamic than ever before and are rehashing some of the classic tunes that still have impact in todays music world.

Song name: Trouble
Music Genre:: Power Rock Trio
‘Trouble’ is about  relationship mishaps and control issues in a past relationship where Chrissy finds herself reaching for her own truth and revenge.

We all have challenges in life and are passionate about creating great music. Chrissy has a dynamic local band influence but can be compared to some classic pop singers like Blondie, Gwen Stefani but she carries her own style. James the drummer has more of a rock and metal influence and Gary on guitar has a punk and metal influence.

Chrissy writes the songs and the others do there parts to create great music. MUK records at James’s FearField Studio where James is also the engineer. Chrissy draws from her life experiences so it helps her to write honest and great lyrics. She is very creative with songwriting and lyric building and basically is in control of the writing of the songs.
It’s a long way to the top if you want to rock and roll.
Something we have learned this past year is patience, were not as young as we used to be and thank God for that.
MUK wants to continue on what they have always loved to do, play kickass music and make history.
All our music is reaching out in different directions but maintain a heavy rock and metal sound. It’s a long way to the top if you wanna Rock&Roll. AC/DC . We rehearse at Fearfield Studio where we work together to record our music. James the Drummer is the engineer and producer of the music. Chrissy writes the music and Gary lays down the solid guitar.
I live in:
Chrissy is from Oakland And James and Gary are from Solano County CA. Were Basically SF. Bay Area so the music scene is thriving and always has been. MUK is taking on many directions and just goin g with the flow. Recording, writing new tunes and playing gigs.Also, not to mention the promo work with pics, videos and social media.
Website & social media links:
https://www.facebook.com/Muk-Music-248349268868015/?hc_ref=ART02fqXkEXYmdTpOf_E5gZviO79P6bRMCQnyxWe98EWB8OJwfx-C2RhJh9BtXO9_K0&fref=nf
www.reverbnation.com/mukmusic7
www.reverbnation.com/fearfieldstudio
californiaMUKoaklandpower rocksolano
By admin03/20/2018FEATURED POSTS, LATEST, MUSIC