Naomi Psalm can best be described, by this reviewer, as a very creative music artist in the realm of indie pop that really brings the word “artist” back into play again. After all, it is supposed to be art isn’t it? With a music industry so far away from musical art and relying on overdone formulaic sound patterns instead of actual musical painting, Naomi brings a much needed refreshing of sound to the music scene.

I’m sure her own music scene in Boise, Idaho is the richer for having her there. She writes, she sings, she plays guitar and ukulele. Oh, and she can play bass as well. Psalm has a knack for knowing what to do with her voice in a given song. Her vocals make good use of her dynamics and she sings with a passion that you can feel in the emotions of what she is singing about. 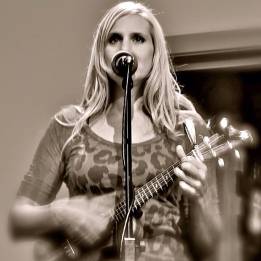 Her voice has some hints of Sarah McLachlan in her tone and melodic expressions at times, but she has a voice all her own.

Currently working on a new album, we must go back a little first to look at some of the musical art that precedes what is to come. Perhaps it may foretell?

First, we journey back to her last single. In her April 21, 2015 interview with Jacqueline Jax on A.V.A. Live Radio, http://avaliveradio.com/behind-the-music-naomi-psalm-music-is-freedom/ Naomi gives a glimpse of what her single “Losin It“ from 2013 might be about when she says, ” It’s based on a true story….lol! I lost more than a few things one day that prompted me to make the best out of it and use the experience for a song. It’s one that everyone can relate to.”

“Losin It” is a fun and lighthearted song that will simply leave you in a good mood. The song opens with a well recorded Ukulele. Now, a ukulele will always get my attention right away, so the intrigue begins the song. A rich bass guitar comes in next with drums driving the song home, and then unexpectedly, the chorus brings a change that brings in a swingy feel that makes one think of the type of experimentation you might get on The Beatles’ White Album in a vaudevillian song like “Honey Pie”. It’s quirky, it’s fun, and it makes you drift off into somewhere else. The song will definitely leave you wondering what she will do next or what she may have done before.

Now we go to 2012. A single titled “Fitted Sheets” was released that year. The sound on this song reminds one more of a mid-western Sheryl Crow type feel and with a west coast laid back vibe behind it and accompanied by a more progressive bass line. It’s unique – which always gets points with me. Though not a bad song by any means, neither did it strike me as a smash hit, but it’s no matter because this song gives a display of the artist’s continuing creativity and uniqueness, which is a more desirable trait.

So let’s go back a little further. On Naomi Psalm’s six-song 2011 EP Stare you get a feel for her continuing creativity where pictures are painted with carefully crafted words.

In the song “Ink” for instance, the song opens with the lines: “Pain turns to ink, ink becomes words, words become melodies, flowing like tears”. The verses of the song captivate you right away with their iambic beauty, driving beat and haunting melody.

I can’t tell you what the song is about, and I don’t like having a song ruined by someone telling me exactly what it’s about because I like to stay guessing. But to me, the song speaks to my own soul of the inherent therapeutic value in music and in creating music. This song is a personal favorite and the one song that would be that unexpected hit song by the artist. A song that would slowly rise on the charts and just stay there for a long time somewhere near the top.

The brush Naomi paints with is streaked with colors of old and new, with experiments and fusions of sound with a twist of pop likability to it. In fact, if you watch the video for the song “Ink”, you will notice there is painted art all throughout the video perfectly fitting my opening description of this artist being an “artist” in the truest sense of the word. I definitely recommend watching the video for “Ink” . 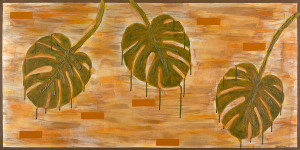 In fact, so much is she the artist that you will find an art section on her webpage. The title of this artwork is Leaves.

Now – back to musical art. Another real powerhouse of a song and what I would call the first of two hits on the Stare EP, for me, is the opening track “Already Hit Send” which is a powerful song that will just leave you feeling in a good mood, well, depending on what mood you started at maybe, but it did the trick for me.

It features what I call an acoustic-guitar-driven-rolling-smoothness on the verses, then on the chorus the bass changes to a slap type bass sound with a synth/keyboard piece behind it giving an extra musical hook to highlight the vocals and brings the song to a new level of goodness! One thing notable to me, as a bassist myself, is the way the drums and bass guitar stay locked together in this and all of her songs, providing a tightness that I often find lacking in many independent artists.

Another notable song from the Stare EP is the song “Gazing”. It is a song that will hook you into it on the chorus, and shows this artist is capable of creating more than just one or two good songs. In the closing song “Listen”, you will find considerable vocal control demonstrated in the delivery and emotional conveyance of the song. Now that we’ve gone back a ways, the question is, “what’s next”?

With a new record in the works, Naomi describes what she has so far recorded for it as “more in the vibe of Imogen Heap and Ellie Goulding with an electronic, industrial feel”. Considering what she’s done in the past and how she describes what’s coming up, one can’t help but be intrigued to hear how the new album will sound! A release is hoped for in late autumn of 2015. And in October look for a song Naomi Psalm wrote to be in a movie titled Ghostumentary.

Having already received various music awards, I’m sure there will be more on the way for this artist! So stay tuned with that, and be sure to connect with Naomi Psalm on her homepage and her social media here: