First Album…
From the moment I started contemplating a solo project, I knew that I really wanted to tell a story with my first album. Writers always say “write what you know”, so I decided to do just that. The story I chose to tell is about a woman who is suffering from Dissociative Identity Disorder, what we’ve all come to know as “multiple personality disorder”. I wanted each track to represent not only a distinct personality in the central character’s mind, but I also wanted each track to convey a different emotion – insecurity, fear, sadness, defiance, acceptance, and so on. While we all do have to cope with these emotions from time to time, for those of us who suffer from mental illness, it can be a constant battle. I was diagnosed with complex-PTSD several years ago, and music has always been therapeutic for me, both listening to it and writing it. Depression and anxiety make people feel alienated. Sometimes just hearing a song you can relate to can give you the strength to pick yourself back up and keep going.

Katherine…
is the second track on the album, and in this song the main character Helen has reached a point where she is beginning to question everything. She’s questioning the whole world, but she’s mainly questioning herself. She’s looking in the mirror, and she doesn’t like the person who is staring back at her. She’s looking at past relationships and wondering what she could have done better. She’s torn between blaming herself for everything she’s been through and blaming the people who have mistreated her. It was a real challenge for me to try to express all of these conflicting emotions through music! I really wanted the song to convey a feeling of duality, which is why you’ll hear quite a few softer, calmer parts followed up by heavy drums and gritty synths.

Creating a Footprint…
Before I even step foot into the studio, I have to have a plan for what type of song I want to write. Like a blueprint, even if it’s vague. Once I have my basic concept down, I usually start by composing a simple drum loop that becomes more complex as the song takes form. I do my best work when there aren’t any distractions to stop my momentum – I definitely have to keep my web browser closed and my phone on vibrate when I write! The only limitation I’d say I have as a musician is the fact that I’m not a singer, so I have to rely on vocal samples to express what I want to say in a track. In a way it can be wonderfully rewarding, because I love a challenge! But it definitely takes a lot of patience, and quite a bit of deconstructing and reconstructing vocal phrases to get the message you want to express across.

Austin Texas….
I live in Austin, Texas, a city whose official motto is the “Live Music Capital of the World”, so there are definitely a lot of venues here that offer all kinds of musical genres! I’ve lived here for four years, and my two favorite music venues so far are Elysium, because I love industrial dance music, and Red 7, a laid back club where you can catch local bands playing all kinds of different music. Truthfully though, my favorite thing to do when I’m not working on music is playing video games! I’m a hardcore gamer nerd! 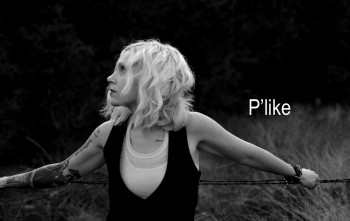 “Depression and anxiety make people feel alienated. Sometimes just hearing a song you can relate to can give you the strength to pick yourself back up and keep going.” Em – P’like @PlikeProject

Bio:
My name is Em, and I’m a solo electronic music producer / songwriter from Austin, Texas. I started out playing bass in an experimental industrial band back in 2003, and from there learned keys, synths, drum programming and sequencing. My sound is eccentric, experimental dark electronica, and I love playing with contrasting sounds, such as layering gritty electronic drums with sweet sounds like toy bells and pianos.
My debut solo album released last November. This being my first solo album, I wanted to tell a story. Here is a short bio about the album:
47th Helen is P’like’s debut album. It tells the story of Helen, the central character, who has been locked away in a psychiatric hospital and forced to undergo experimental treatments. Through several of the 47 personalities that live in Helen’s mind, the trauma that Helen has endured is expressed through music.
– I’m not the vocalist – the vocals are samples by Veela, courtesy of Black Octopus Sound.
– The name “P’like” is pronounced “Plike” (“like” with a P), and means “pretend like”. It’s a word my sister and I came up with when we played together as kids.