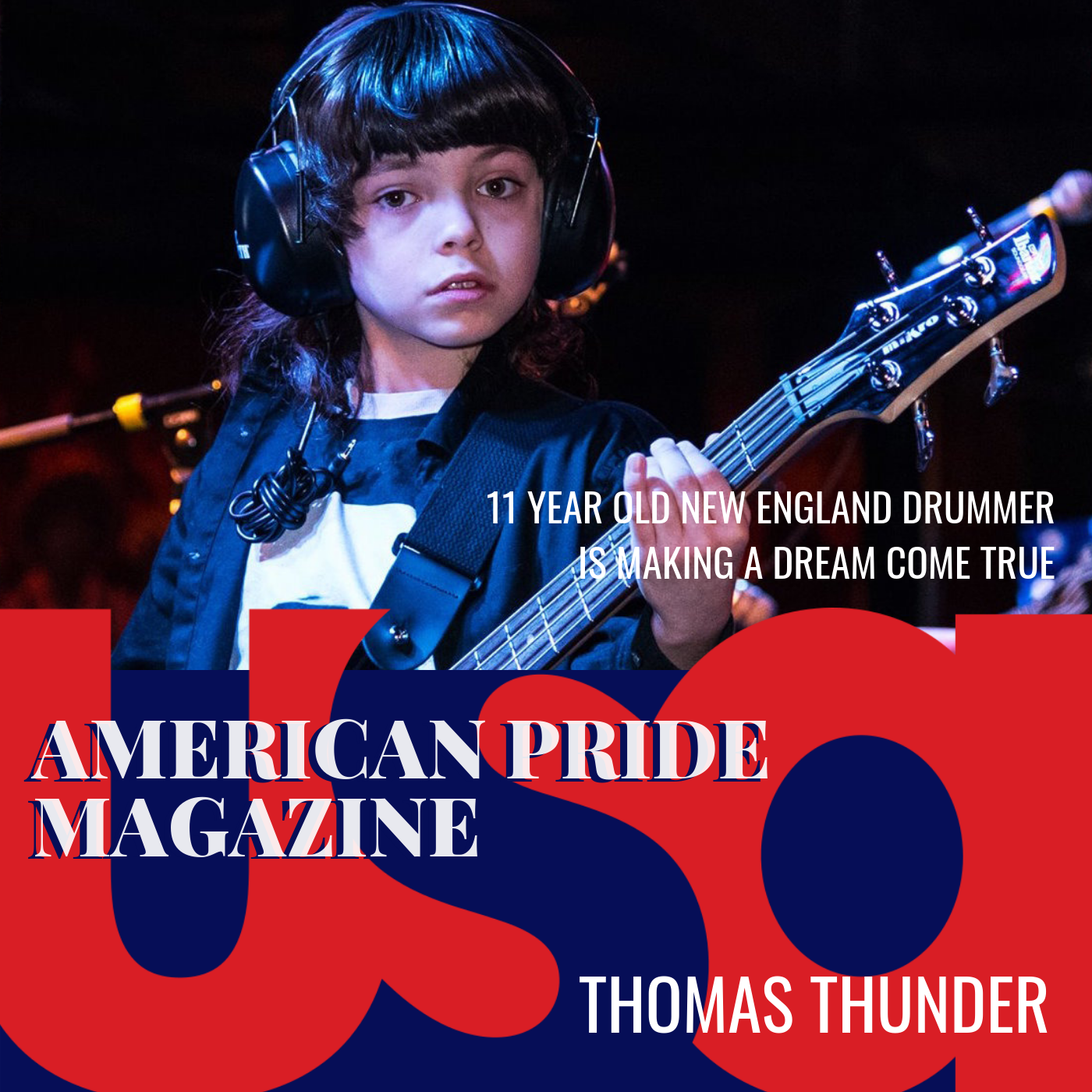 Thomas is an 11 year-old drummer and Progressive Rock Songwriter. He started playing drums at 5 years-old under the direction of a private teacher. He joined School of Rock Seekonk, Ma at 8 years-old and joined their band programs to give him the opportunity to play live music with other members. Thomas plays with members almost twice his age, as his music ability is quite advanced for his age.

Thomas also plays the bass guitar, but drums is his primary instrument. It was suggested to get Thomas a music writing App, as Thomas “eats, breathes and lives music”. We downloaded the App Garage Band for him as suggested by one of his music teachers, and Thomas taught himself how to use it. Thomas gets an idea for a song, and writes each part separately directly in the App. He plays instrument within the App: drum parts, bass line; guitar, keyboards and symphonic instruments. He then layers the instruments together on the App, until he’s pleased with his performance. Thomas began writing songs at 10 years old, which has progressed over the past year.

In 2018, Thomas won a songwriting award in the Eventide Theater Songwriting competition in the Instrumental category for his original song “A New Kitten”. This was a competition for adults, and Thomas’ song stood out as being award worthy. Thomas spends about 8 hours per week in music lessons, and probably 4-6 hours per day writing, listening and practicing music. Thomas is homeschooled and has been a member of MENSA, the high IQ society, since 5 years-old. Thomas’ goals include wanting his own band, writing and producing his own music for film scores and performing with a symphony.

This song is about…
Night Terrors is an instrumental, progressive rock concept with horror film elements. In the words of a fan ” it’s the soundtrack for creepy clown nightmares”. For rock fans, there’s both a heavy drum and guitar element, and for progressive rock fans there’s synthesized keyboards and lots of tempo changes. If you love scary movies, this song will transport you right in the middle of a zombie apocalypse.

The most influential factors in Thomas’ music has been…
a combination of his teachers and certain musicians. School of Rock Seekonk is a major influence in that they provide the opportunity for children (and adults) to play in a band, and perform live in front of an audience. The Musical Director and Co-Owner, Shawn Garrity and the Owner Phil Martelly, highly encourage Thomas, and provide the opportunity for Thomas to perform and record his original songs. Thomas also finds inspiration in the music he listens to. After listening to Pink Flyod’s The Wall and the Jesus Christ Superstar Soundtrack, Thomas was encouraged to write his own concept album. Thomas wrote a 19 song concept album, dedicated to his cat. The one song he released “A New Kitten” won a songwriting award. Thomas’ most influential bands are Muse, Avenged Sevenfold, Metallica, Dream Theater, Steven Wilson and Pink Floyd.

Thomas’ songwriting process includes inspiration from an outside sources…
usually one of his pets. The majority of his songs have come from watching and admiring the behavior of his beloved cats and dog. Other times, he’s playing instruments on the Garage Band App, and he comes up with a drum groove, a keyboard pattern or bass lick and builds around that. Thomas will sit and write a song in one sitting when he gets inspired, so he may spend up to 6 hours finishing something with great intensity. He plays each instrument individually on the App: for example he’ll select the keyboards and play a pattern, and then layer it on top of the other instruments. He does this methodically with each instrument. He likes the sound of symphonic rock, so he often selects strings, woodwinds and brass sounds. It’s amazing to watch his fingers move so quickly to play all these instruments on the App, then layer everything together.

Thomas lives in Southern New England…
about an hour South of Boston, Ma. He spends most of his time playing or listening to music. If he’s not at School of Rock or sitting at home playing the drums, bass guitar or using Garage Band, he’s doing drum patterns on his legs or chest with his hands. It’s almost constant. The time in-between music and school, he’s playing with his cats, reading articles about the latest space discoveries or watching Spongebob Squarepants.

Over the past month…
Thomas has been focusing on playing his song Night Terrors live with band members he selected from School of Rock Seekonk. He’s also making a live performance video to post on his Youtube channel. Thomas wants to create a successful Youtube channel to post drum videos and showcase the Progressive Rock songs he writes. There are hundreds of drummers on Youtube, but Thomas seems to stand apart in that he’s also an 11 year-old award winning, instrumental songwriter.

The three things Thomas learned this year are:
1. His songwriting is award worthy
2. Performing his original songs with a band is inspiring
3. Becoming a 6th grader carries a lot more responsibility than previously experienced.

Coming up in 2019:
Thomas is looking forward to writing a few more songs this year. He hopes to “get his songs out there” so more people can enjoy listening to them. He’d like to get his songs on Spotify and perhaps look into getting his songs into some type of film, commercial or video game.