Band Name: MONROE
MONROE is a POP and R&B artist and songwriter born in Virginia. He has loved music for as long as he can remember. As a teenager, he had originally planned to pursue a career in film making, but later decided to focus on music. MONROE cites music legend Marvin Gaye as his biggest influence, and his fans often refer to him as a “modern-day Marvin Gaye” because of their vocal similarities. MONROE creates music to inspire people and to promote a message of love, sexuality, and healthy relationships.

MONROE got his start in the music business recording demos and performing at local nightclubs in Virginia, Maryland, and Georgia. In 2009, he parlayed his success with the release of his single, “Let’s Make a Movie.” The song garnered favorable reviews from local media and set the tone for several follow-up songs, including  “Wish I Never Fell In Love”, “Private Party, ”Proud To Be With You”. MONROE recently released a new single, “DRINK ,” which has already begun to create a buzz in both Atlanta and Maryland and Virginia.

As a performer, MONROE has been fortunate to open for some of the biggest names in R&B and Hip Hop, including Trey Songs, Jagged Edge, R Kelly, Brownstone, Silk, Mac10, Killer Mike, Bone Crusher, David Banner and Kurtis Blow and more. The aspiring musician admits to being no stranger to hard work and perseverance and, throughout his career, he has been made numerous sacrifices in order to become the best artist possible. His skills and accomplishments have been recognized by his fans who support his shows and introduce new fans to his music. MONROE’s future plans include owning his own record label, writing and producing other artists, and producing various film projects.

I live in… Atlanta Ga., I spend most of my time traveling, doing shows, in the studio and grinding! 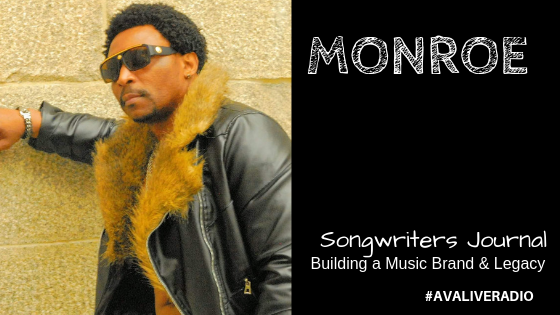 Inspiration…
We all need people around us who inspire us to be better.  My family, my team, and my fans that support me have all been influential in my life and music. They motivate me to keep going and keep putting out good work!

When did you know that this was the right path for you?
When I was a little boy, I use to watch my mother practice with her group. I was five years old when she passed so I look at this journey as a way to celebrate her and finishing up her legacy!

What do you like most about what you do?
I love the creative side and the challenge of creating everlasting music and video’s, that will make me live forever! Bruce Lee said it best, “The key to immortality is to first live a life worth remembering. ”  I’m hoping to achieve that every day.

What do you most hope to accomplish with your influence?
I really hope that my hard work will inspire others to do good things. As an indie artist, I want to pave roads for other artist that have hopes and dreams. I want to prove that if they put in the work, believe in themselves and put all their trust in God, not man it can be done.

What is the biggest obstacle you have faced in your career, and how did you overcome it?
I’ve been through alot in this journey so far. I’m self created and putting my own money behind my work. When I started, I didn’t have the right team around me so I made alot of mistakes. But I learned some very valuable lessons. It does also take money to push you to the next level. Invest in yourself because it’s up to you to build it BRICK by BRICK!

What do you want people to remember most about you and your career?
That I was a hit maker, and I did it independent, and that I sold 40,000 CD’s on the streets, and that I was a humble person, and I was a giver!

What are you most looking forward to this next month?
I’m really excited to see my new single on different platforms. Hopefully I’ll see alot of new fans and lots of streams to the song, to make it an official hit!

NEW SINGLE
Song name: Wish I Never Fell In Love
Music Genre:: POP
This song is about falling in love and giving your heart to someone, and they leave you like you meant nothing to them!