Fashion bloggers are everywhere these days! But, few have surpassed the noise and made it to the top. We’ve gathered 5 women who inspire us well-beyond their sartorial choices and Instagram feeds. From Chiara Ferragni’s powerful entrepreneurial skills, to Aimee Song’s second job and two fashion lines, to Gabi Gregg’s positive body image mantra, these women are changing the face of the fashion blogging world for good. 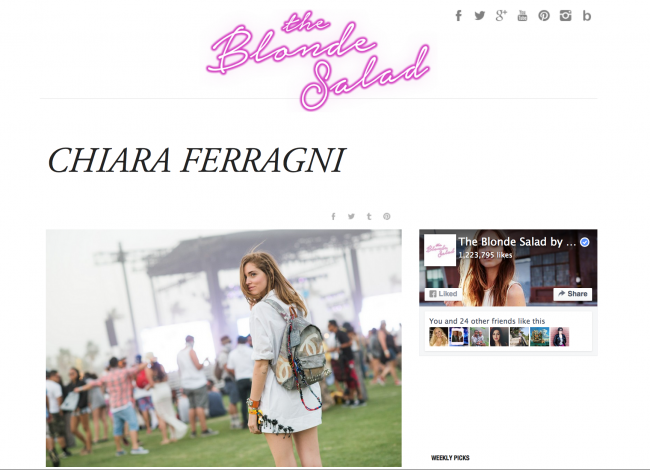 Chiara Ferragni was born in Cremona in 1987. She inherited from her mother the passion for fashion and photography and already when she was a teenager she became popular on the first online communities, where she shared photos she was taking with her friends. In 2009, when blogs were not yet the today phenomenon, she launched TheBlondeSalad.com, to express herself and relate to 360°.

The Blonde Salad is much more than a blog today , it’s a real source of inspiration and style for millions people in Italy and around the world. Chiara Ferragni collaborates today with the major Fashion Houses, she appears in the most read magazines, she is the creative director of her shoe line which is entirely Made in Italy and she has been named by Business of Fashion as one of the most influential personalities of the international fashion world. http://www.theblondesalad.com/about 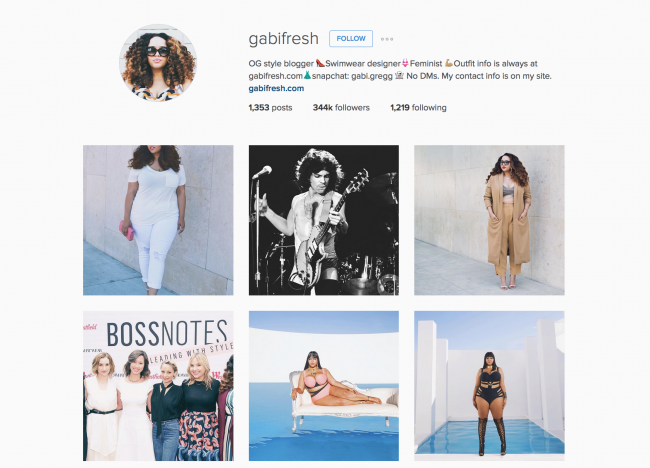 Gabi Gregg accrued Internet popularity  April 2012 after posting photos of herself lounging by the pool in her slamming black and white bikini. She then encouraged others to do the same as a part of XOJane’s Fatkini Gallery and share they did! Sadly, not all of the responses to the gallery have been positive, with Gregg being accused of everything from glamorizing unhealthy lifestyles to not being fat enough.  She started her blog in September 2008 after graduating college with an interest in fashion journalism. Since I didn’t have experience and couldn’t land an entry level job or internship, I decided blogging would be a great platform to show my writing skills and love for fashion. I knew first-hand the lack of resources for younger, trendier women sizes 14 and up, so I decided to fill the void. Over time, it has transformed into a personal style blog, where I share my fashion advice (which mostly consists of “ignore fashion rules!”) and outfits that I hope inspire others to take risks and have fun with clothing regardless of their size. I pretty much disagree with most mainstream fashion ideas and reject the notion of “dressing for your body type.” – http://gabifresh.com/ 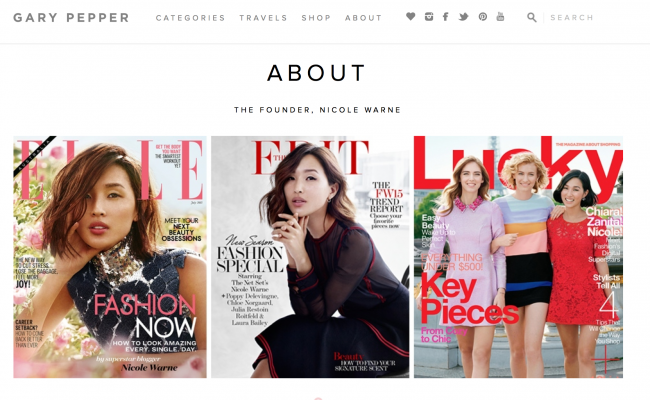 Nicole is highly regarded in the fields of fashion, digital and social media, and e-commerce, collaborating with brands as a creative director, social media and brand consultant, digital influencer and ambassador. She has also added presenting to her list of skills, as the host for Mercedes-Benz Fashion Week Australia Global Live Stream program in both 2013 and 2014, as well as featuring as a guest on numerous commercial television networks. Nicole’s creative skill set, sharp focus on high-quality content and innate eye for detail is highly sought after, and she counts premium brands Chanel, Valentino, Chopard, L’Oreal Luxe and Net-a-Porter.com amongst her list of clients. She has graced the covers of Elle Australia, Miss Vogue Australia, Lucky, Nylon and Net-A-Porter.com’s The Edit. She is included industry lists as FORBES ’30 Under 30′ Asia, Business of Fashion ‘#BoF500: The People Shaping the Global Industry’ and Porter Magazine’s ‘100 Incredible Women’ . Owning her own successful company by the age of 20, Nicole also lends her entrepreneurial skills and business knowledge to brands and businesses, from established global corporations to local technology start-ups. She was recently on the judging panel for the 2015 Australian Fashion Film Awards, the Australian BT Emerging Fashion Designer Award as well as the 2014 Calvin Klein Accessories International Design School Project Award. http://garypeppergirl.com/about

Leandra Medine is the founder of Man Repeller, which she likes to call a nudist colony, and author of Man Repeller: Seeking Love, Finding Overalls. She just started making her own chia pudding. Medine is known to fashion lovers as both the voice behind the blog turned style website Man Repeller and the original Man Repeller herself. The girl-power philosophy behind the name implies that enjoying fashion for its art and dressing accordingly can be subversive, empowering, and, often, confusing to the opposite sex. Medine writes in a style tributary to the layered looks she’s known for snapping on her site—using 10 curlicue, roundabout words when a couple plain and direct ones would do—but therein lies the fun of reading her. New Yorker to a T, she delves into dating, her Manhattan upbringing, and her stumble into the A-list fashion spotlight with candor and a surprising amount of physical comedy. Her essay about getting engaged and then panicking about how to “come out” to her readers—who only knew her as their dear Repeller—presents a uniquely modern problem well told. A less talented writer behind this high-fashion curtain could make it all a detestable snore, but the utterly likable Medine comes across vividly and sincerely in writing what she loves. –Annie Bostrom http://www.manrepeller.com/author/manrepeller

Invideo: POPSUGAR Fashion is the ultimate source for what’s new in fashion, hosted by Allison McNamara.