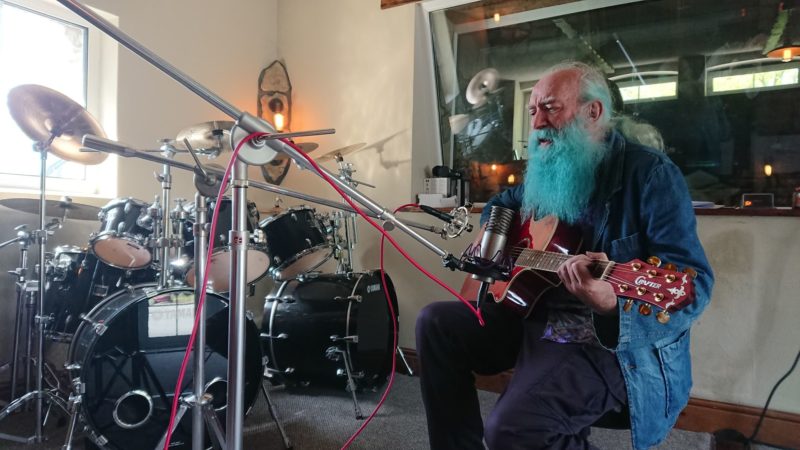 This song is about the plastic pollution, a worldwide problem that affects us all. I thought that seeing as no one else was going to do this that it was up to me to bring the subject into the music world.

Band Name: Steve Andrews
Person Interviewing: Steve Andrews
Often compared with Neil Young, Steve Andrews is an eclectic singer-songwriter and author from Cardiff in Wales but now based in Portugal, where he has been number 1 in the Reverb Nation chart for Singer-songwriters. He is also known as the Bard of Ely and Green Bard, and he has a green beard. He has performed at the Green Man and Glastonbury Festivals and was an MC at both events as well. In 2017 he was a finalist in the Best Solo Act category of the Cardiff Music Awards. Andrews has been featured on the Britain’s Got Talent TV show and his performance was extensively written about in the press because he got a lot of the audience up on stage.
Song name: Where Does All the Plastic Go?
Music Genre:: Folk-rock/Acoustic/Singer-songwriter
This song is about the plastic pollution, a worldwide problem that affects us all. I had been waiting in vain to hear some other singer-songwriter writing and singing about the subject but nobody was doing so, not even Neil Young, who has kept up his work as an activist, environmentalist and protest singer, as well as being a legendary rock star. I thought that seeing as no one else was going to do this that it was up to me to bring the subject into the music world.

My music is eclectic because I write about many subjects and draw from many influences. I am currently writing protest songs about the environment.

Where Does All The Plastic Go? is very much a protest song.
I also have also had an idea I would like to share here. I think we need a massive concert, like Band Aid and Live Aid, but this time it would be Ocean Aid, and would raise awareness about the problem of plastic. I am sure if this could be organized that lots of big name artists and bands would be keen to be involved. This songvery much represents my current direction because I am writing about real issues that affect us all and that concern me deeply. I have been increasingly speaking out about environmental matters, not just in my songwriting but on social media and as a supporter of many campaigns.
Earlier this year, I also became actively involved in the battles to save city trees in the UK, in Cardiff, Sheffield and elsewhere in Britain. I changed the words of Stand By Me, (a song I am famous for covering) to “Stand by tree,” and I changed Give Peace A Chance to “All we are saying is give TREES a chance.” I have become a “poster-boy” for the campaigns to save British trees, and was also interviewed by Jonathan Downes for GONZO Weekly #280, in which I was the cover star: http://gonzo-multimedia.blogspot.com/2018/03/gonzo-weekly-280.html
Link to play:: https://www.reverbnation.com/bardofely/song/29514495-where-does-all-the-plastic-go
It was way back in the late 1960s that Bob Dylan’s songs inspired me to want to become a singer-songwriter too. It was the power of his lyrics and the imagery he used. Neil Young is another singer-songwriter who has had a very big influence on me, and whose career I have followed as a fan. For me it is the words and emotions in a song that touches me rather than the music. I have always been inspired by the singer-songwriters, including those who are in bands but who write the songs. I think it is because I am a poet and a writer first and secondly a musician who comes up with tunes to add something to his words.

I am a poet who adds music. I write my lyrics first of all, and a song often starts life as a poem, which may remain one for weeks, months or even years, before I come up with the music to make it into a song.

I find the melody and chords on an acoustic guitar and see how well they fit with my lyrics. It is never the other way with me coming up with a tune first but I know many songwriters work that way. As for production, I am working with a professional producer at a top quality recording studio. Where Does All The Plastic Go? was recorded at Northstone Studios in Bridgend, South Wales, and produced by Jayce Lewis, who has worked with Brian May and Roger Taylor of Queen, Gary Numan and the late great Steve Strange (Visage). Jayce has already been the producer of four other songs of mine: Ever Yours, Living Book, Girl Singer and Citizen Of Earth. We are getting together again in October of this year to record an album. We work well together, and I am confident of getting the kind of result I want with his production skills.
I live with two cats in a rented ground floor apartment in a quiet part of a town about 25 km from Lisbon. I spend most of my time on my many creative projects. I am a freelance writer and author as well as a singer-songwriter and I usually have something I need to write. I have two books about herbs published by Moon Books: Herbs of the Northern Shaman and Herbs of the Sun, Moon and Planets. A new book entitled Herbs of the Southern Shaman is nearly ready to be published, and I will be working on the index later today.

I am not sure who said this first but it is something I apply: “Keep on keepin’ on.”

This past month I have focused on promoting my song Where Does All The Plastic Go?, and am very pleased it got featured on the Brian May’s Save Me page on Facebook. This song represents something very important to me and is also an example of my current direction, because I am speaking out far more about nature and environmental issues. I think the song works very well as an introduction to my work as a singer-songwriter.
This past year
1. I have learned to talk and sing about stuff you are passionate about and not to worry about how popular or commercial it is. I have been using social media to share my thoughts on nature and the environment and been increasingly getting a good response to my posts.
2. I have learned more about using Twitter as a great way of promoting your work in the social media. Twitter is a wonderful communication tool but it does take some learning to do so well.
3. I have learned what Summer Solstice celebrations at Stonehenge are now like for people who attend the event.
I am most looking forward to recording my album with Jayce Lewis as producer, and then to see where my music takes me.
Website & social media links: : Reverb Nation: https://www.reverbnation.com/bardofely
Facebook: https://www.facebook.com/BardofElymusic/
Facebook fan page: https://www.facebook.com/bardofely/
Twitter: https://twitter.com/bardofely
Wikipedia: https://en.wikipedia.org/wiki/Steve_Andrews
Youtube: https://www.youtube.com/user/bardofely
Spotlightzone: http://www.thespotlightzone.com/profile/?band=132
Soundcloud: https://soundcloud.com/bardofely
Top Music Japan: http://topmusic.jp/product_info2.php?products_id=1534
AcousticFolk Rocksinger songwriterSteve Andrews
By admin07/10/2018FEATURED POSTS, LATEST, MUSIC